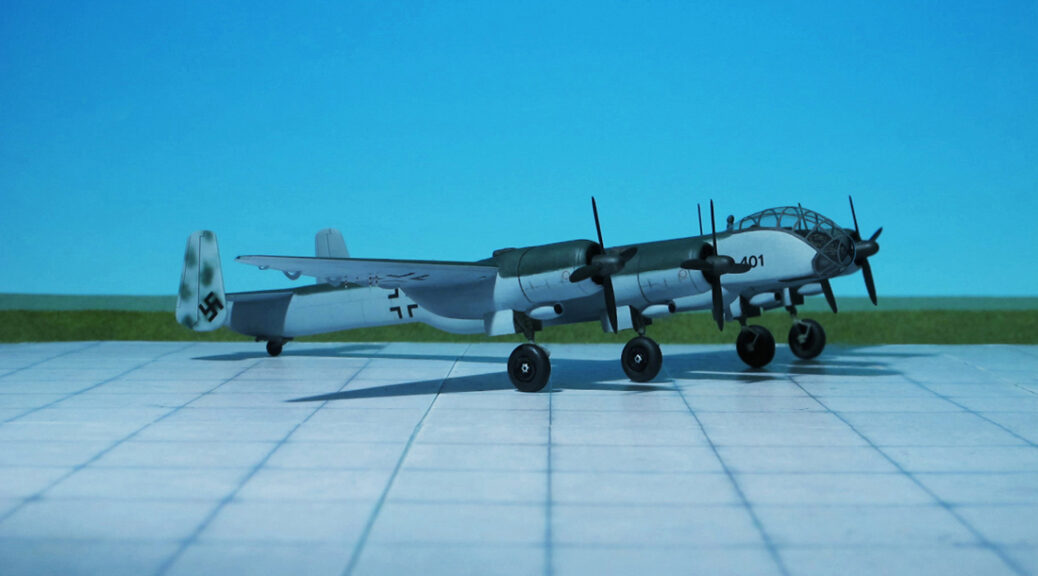 COMMENT: The Junkers Ju 488 was Germany’s last real attempt to create a four-engined, long range bomber. In early 1944, Junkers design department at Dessau made a proposal to simply and quickly produce a heavy bomber, using a minimum of new building jigs or parts. Basically, the Ju 488 was to be constructed out of existing Junkers aircraft. The Ju 388K was to supply the pressurized crew cabin, the Ju 188E supplied the rear fuselage, the ventral pannier was to come from the Ju 88A-15 and Ju 388K series, outer wing sections from the Ju 388K and finally the entire twin fin tail section from the Ju 288C. Added to this collection were a new center fuselage section and a parallel wing center section, to carry the four engines.
The Ju 488 V401 and V402 were to be entirely of metal construction, with the exception of the ventral pannier, which was constructed of wood. The fuselage had an internal bomb bay and five fuel tanks located behind the fuselage and above the bomb bay. The mid-fuselage mounted wing was tapered on the outer wing panels and featured a two spar, all metal construction, with a total of eight fuel tanks within the wing. Four BMW 801TJ 14 cylinder radial engines (driving four bladed propellers) were mounted in individual nacelles, with each nacelle containing a single main landing gear leg, which retracted to the rear. One interesting design workaround was that the outer engines had to be mounted lower on the wing, because the wing dihedral would have left the landing gear a little short from reaching the ground. No defensive armament was to be fitted to either the V401 or V402.
Proceeding in parallel with the first two 488 prototypes’ construction, a new, larger aircraft was being designed. This was to be the production model Junkers Ju 488A, and four prototypes (V403-406) were ordered. This new version deleted the wooden ventral pannier and the wing was moved further to the rear. The BMW 801TJs were to be replaced by four Jumo 222A-3 or B-3 liquid cooled 24 cylinder four row radial engines. Perhaps the biggest change was the lengthened fuselage, which was to use a welded steel tube construction with a sheet metal covering towards the front portion of the aircraft, and a fabric covering for the rear. An extra fuel tank could now be carried within the fuselage, for a maximum total of 15.066 liters (3.980 gallons). Defensive armament consisted of a remote controlled tail barbette with two MG 131 13 mm machine guns and a single remote controlled dorsal turret with two MG 151 20 mm cannon, both controlled from the pressurized cockpit via a periscope.
Work was begun on the Junkers Ju 488 V401 and V402 prototypes in the former Latécoère factory at Toulouse in early 1944. The plan was for the fuselage and the new wing center section to be built in Toulouse, all other components would come from the Junkers Dessau and Bernburg factories. It was hoped to have the Ju 488 in operational service by mid-1945. Construction was well advanced when the decision was made in July of 1944 to move the existing work done to date to Bernburg by train, due to the rapidly advancing Allied invasion forces. On the night of July 1944, resistance fighters succeeded in destroying the Ju 488 V401 fuselage and center wing section to the extent they could not be salvaged. After the last of the German forces evacuated the city in late August 1944, the V402 forward fuselage section was found covered and abandoned on a railway siding. No record seems to exist as to the final disposition of this last remaining Ju 488 piece. The entire Ju 488 program was discontinued in November 1944, when it was realized that a new large bomber aircraft was not needed at this stage in the war. An attempt was made to offer the Ju 488 design to the Japanese, but they were not interested (Ref.: 17).