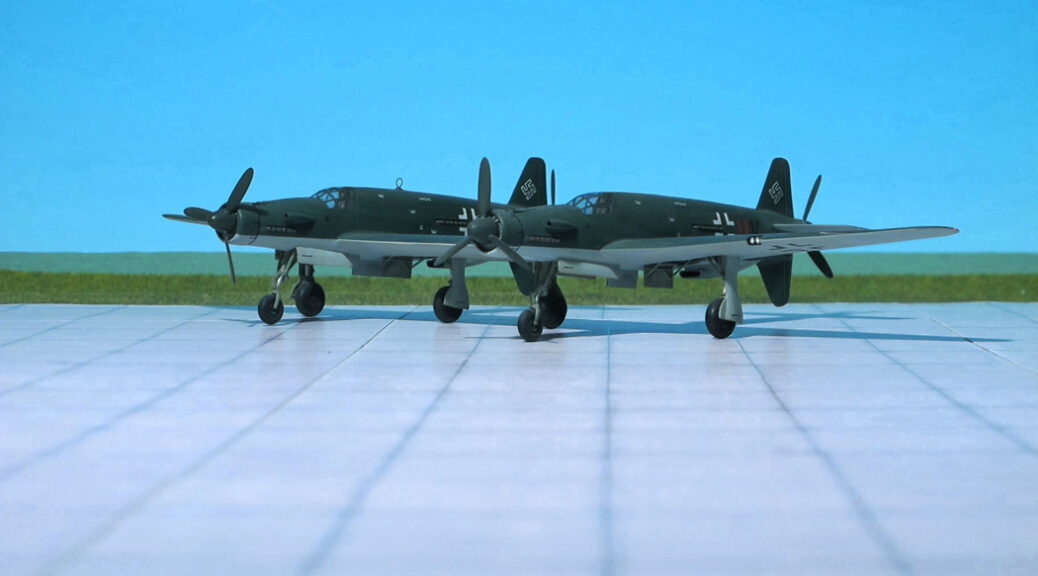 COMMENT: The Dornier Do 635 was a WW II long-range reconnaissance aircraft of the German Luftwaffe proposed by Dornier Company, as two Dornier Do 335 fuselages joined by a common center wing section.
In 1944, designers of Dornier Flugzeugwerke proposed the RLM a long-range reconnaissance aircraft with a range of 2.480 mi under the designation Dornier Do 335Z (Z for Zwilling ; “Twin”). Similar to the Heinkel He 111Z, a combination of two Heinkel He 111 bombers joined by a common center wing section, two Dornier Do 335B fuselages were connected by a center wing section. The pilot was seated in the left fuselage, the radio operator/navigator sitting in the right fuselage. Armament was not envisaged. The RLM confirmed the design provided the range was increased to app. 3.720 mi. Further modifications changed the design from the original Do 335 into a completely new aircraft; the new RLM designation was now Dornier Do 635. Four prototypes were ordered and begin of production was planned for June 1945.
On order of the RLM and representatives of the Luftwaffe the cooperation with Dornier was cancelled and all further development was transferred to Heinkel Flugzeugwerke.
Reason might be that Heinkel’s team had much experience with the Heinkel He 111Z and its twin fuselage combination.  The designation of the project was internally changed to Heinkel He P.1070, officially Heinkel He 535 (or He 635, depending on literature). Again, profound changes were required. In order to increase range three external fuel tanks under the outer and center wings were provided, the wing span was reduced and the fuselage length was increased.
All these changes did not satisfy the RLM, so the design was revised again. The crew compartment was now solely positioned in the left fuselage and enlarged to seat three crew members: pilot, copilot and observer/navigator. Wing span was increased again, the center wing section was shortened to bring both fuselages closer together and the inner tail planes were provided as a common sector.
Meanwhile, a lot of time was wasted due to permanent changes in the requirements of the design. Finally, all further development was transferred to Junkers Flugzeugwerke. Prof. Hertel and his team refined the design once again, now under the designation Junkers Ju 635. The aim was to simplify the aircraft for easier production and an increase of range to app. 7.200 mi.
As its predecessor the Junkers design used two modified Dornier Do 335 fuselages, joined by a center wing section of constant chord, the outer wing panels were tapered back. Four Daimler-Benz DB 603E-1 engines supplied the power, one in each forward fuselage pulling and two in each rear fuselage driving a pusher propeller via a long drive shaft. Fuel was carried in ten internal wing tanks, four in the fuselages and possibly one in each fuselage bay. The port fuselage bay carried two Rb 50/30 cameras and the starboard bay contained five 60 kg marker bombs. A crew of three was envisioned, although this could be increased to four eventually. The pilot and the radio operator sat in the port fuselage and a second pilot sat in the starboard fuselage. The fourth crew member (navigator) was also to sit in the starboard fuselage. The landing gear was to consist  of two nose wheels under each fuselage nose, two main wheels which were fitted with mud guards to protect the rear radiator intakes, and a jettisonable fifth wheel located beneath the center wing, which was fitted with a parachute for recovery. The main wheels were modified from the Junkers Ju 352 transports wheels. Two Walter HWK 109-500 RATO (Rocket Assisted Take Off) units could be fitted to assist take off. No armament was included due to the fact that this was a long-range reconnaissance aircraft and thus all weight was reserved for fuel and speed.
Four prototypes and six preproduction aircraft were orderd, the first example planned to take-off on February 1945. By early 1945, wind-tunnel models had been tested and cockpit mockups had been constructed. But by February 1945 due to the worsening war situation all further work on the Junkers Ju 635 was stopped.
The model shown here is the first design of the Dornier Do 635 (Ref.: 17, 24).