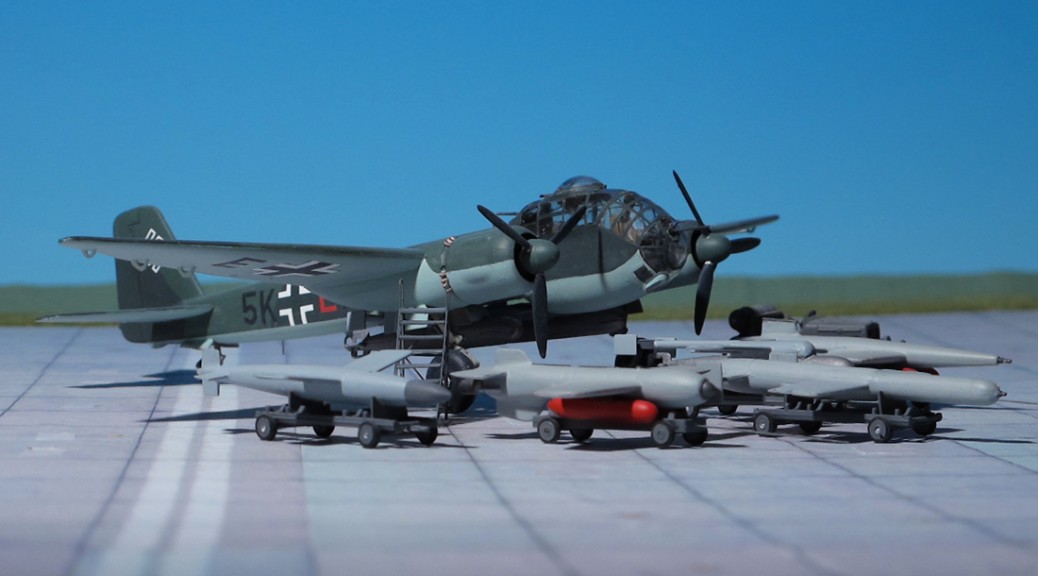 COMMENT: The Junkers Ju 188 was a German Luftwaffe high-performance medium bomber built during WW II, the planned follow-up to the famous Junkers Ju 88 with better performance and payload. It was produced only in limited numbers, due both to the presence of improved versions of the Ju 88, as well as the increasingly effective Allied strategic bombing campaign against German industry and the resulting focus on fighter production.
In grand total 1,234 aircraft were delivered until the end of the war in several subtypes Junkers Ju 188A & E, C, D & F, G & H, and R. The Ju 188 was designed to be fitted with either the 1,730 hp Jumo 213A or 1,680 hp BMW 801 G-2 engines without any changes to the airframe, with the exclusion of the re-design for Jumo-powered examples, of the annular radiators from their Jumo 211 layout for the A-series to better match the more powerful 213’s cooling needs, while still using essentially the same broad-chord three-blade propellers as the A-series did. It was originally intended that both would be known as A models, but the naming was later changed: the Ju 188A model powered by the Jumo 213, and the Ju 188E by the BMW 801.
The first three production Ju 188 E-1 machines were delivered with the BMW engines in February 1943, another seven in March, and eight in April. A special unit for conversion testing was formed up in May 1943, after testing the aircraft were attached to an operational unit, with the first mission taking place on 18 August 1943. By the end of the year, 283 Ju 188s had been delivered (including Ju 188Fs), and two new factories were added to the production effort.  Most operational machines differed from the prototypes only in having a 20 mm MG 151/20 cannon in the nose and dorsal turrets in place of the 13 mm MG 131. The MG 131 I was intended to be used  in the Ju 188 E-1 or the G-2. But the heavy armament in the A and E series was the MG 151/20. The Junkers Ju 188 E-2 was built as a torpedo bomber, but was identical to the Junkers Ju 188 A-3 (Ref.: 24).