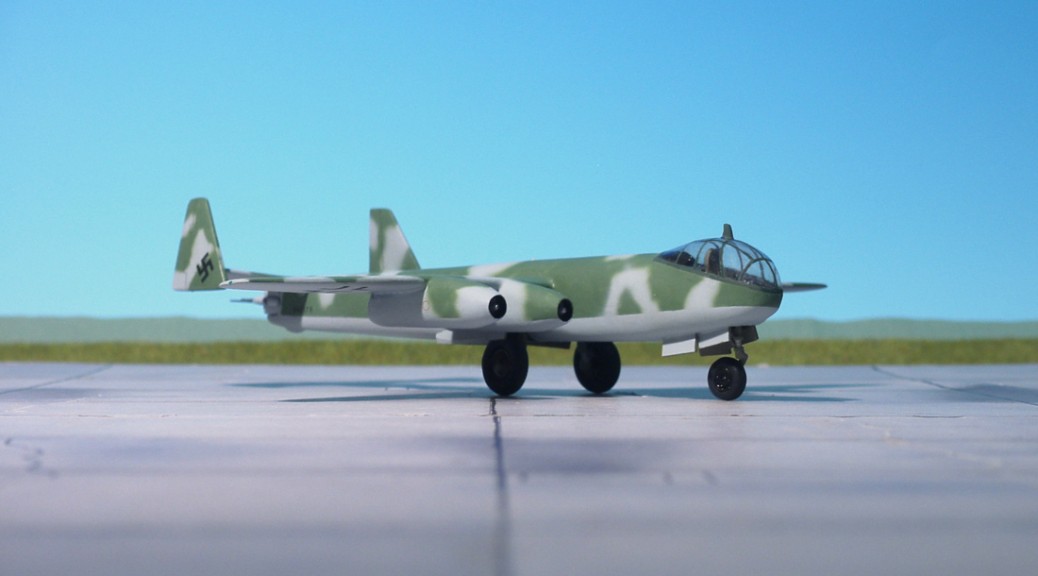 COMMENT: The Heinkel He 343 was a four-engine jet bomber project by Heinkel Aircraft Company in the last years of WW II. In 1944 a total of 20 of these aircraft were ordered. For shortening the development time and for re-use of existing parts, its general design was envisioned along the lines of an enlarged Arado Ar 234 “Blitz” (“Lightning”). For a choice of engines, the Junkers Jumo 004 and the Heinkel HeS 011 were planned. The DFS (Deutsche Forschungsinstitut für Segelflug),  (German Research Institute for Gliding Flight) was involved in the project and created the project known as P.1068. By the end of 1944, work was nearly finished by the Heinkel engineers, with parts for the He 343 prototype aircraft either under construction or in a finished state, when the order was cancelled due to the “Jägernotprogramm (Emergency Fighter Program). Four versions were planned: the He 343A-1 bomber, the He 343A-2 reconnaissance aircraft, and the He 343A-3 and He 343B-1 Zerstörer (“Destroyer”) heavy fighters.
The Heinkel He 343B-1 differed from the He 343A-1 bomber version especially in the tail unit. Instead of the two fixed rear firing guns in the fuselage rear, a FHL 151Z remote controlled turret was installed in the extreme rear fuselage. This necessitated a tail redesign to a twin fin and rudder set up. A rear facing periscope in the cockpit was used to aim the FHL 151Z turret, which was armed with two MG 151 20mm cannon. The twin tail would have made for extended flight testing, plus would have added additional weight and drag (Ref.: 17, 24).