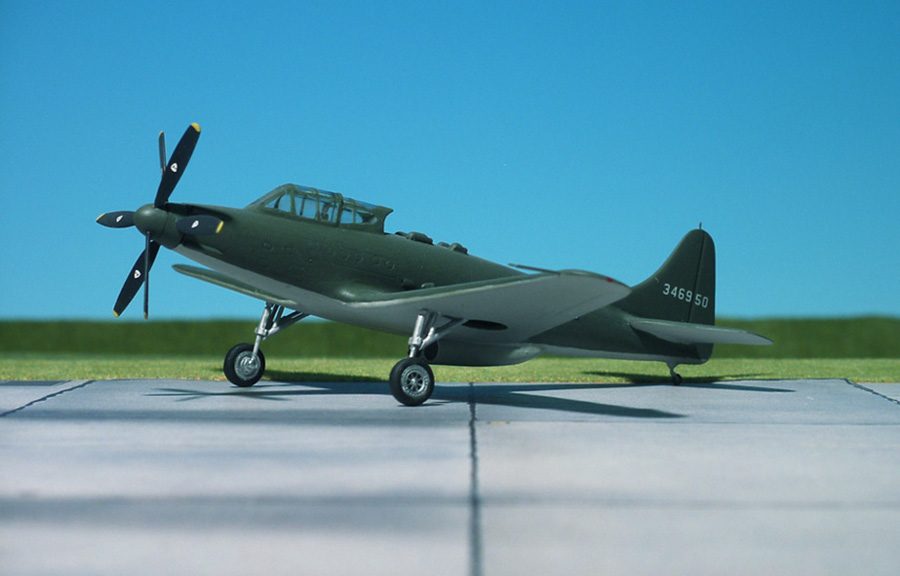 Comment: The General Motors/Fisher XP-75 “Eagle” was a fighter aircraft designed by the Fisher Body Division of General Motors. Development started in September 1942 in response to USAAF requirement for a fighter possessing an extremely high rate of climb, using the most powerful liquid-cooled engine then available, the Allison V-3420.
In October 1942, the contract for two prototypes was signed. The design concept was to use the outer wing panels from the Curtiss P-40 “Warhawk”, the tail assembly from the  Douglas A-24 (SBD) “Dauntless”, and the undercarriage from the Vought F4U-1 “Corsair” in a general layout much as in the Bell P-39 “Airacobra” with the engine located amidships with the propeller driven through an extension shaft.
In mid-1943, the need for long-range escort fighters became more urgent than fast climbing interceptors so a decision was made to order six more XP-75 airplanes modified for the long-range role. At this time, an order for 2,500 production aircraft was also let, but with the stipulation that if the first P-75A was not satisfactory the complete order might be canceled.
Powered by a V-3420-19 24-cylinder engine rated at 2,600 hp driving co-axial contra-rotating propellers, the XP-75 flew for the first time on 17 November 1943. The second XP-75 flew shortly thereafter, with all six long-range XP-75s entering the test program by the spring 1944. The test program brought up numerous teething problems, including miscalculation of the fighter’s center of mass, failure of the engine to produce its expected power, inadequate engine cooling, high aileron forces at high speed, and poor spin characteristics. These failures led to a complete redesign of the aircraft to a long-range escort fighter with the unchanged designation P-75 “Eagle” (Ref. 24).