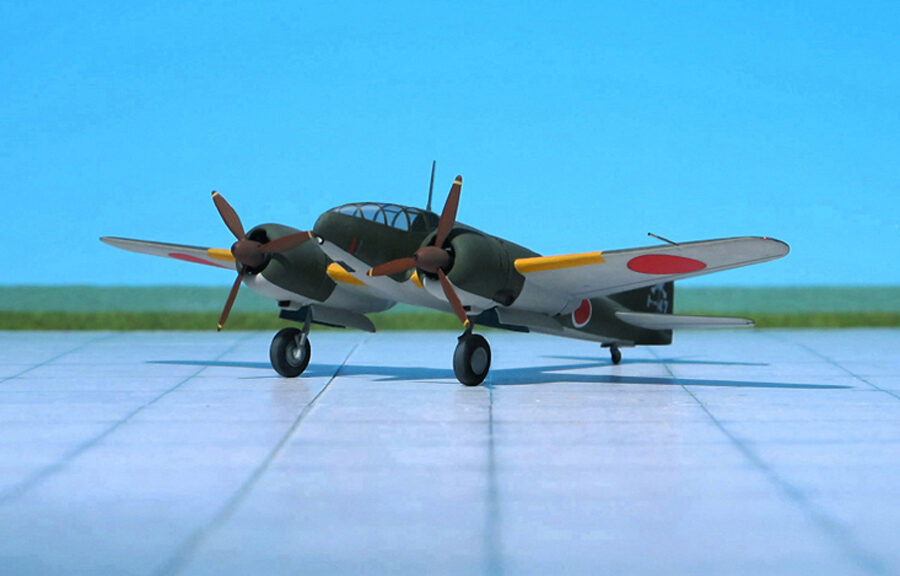 COMMENT: The Mitsubishi Ki-46 was a twin-engine reconnaissance aircraft used by the Imperial Japanese Army in WW II. Its Army  designation was Type 100 Command Reconnaissance Aircraft; the Allied nickname was DINAH.
At the beginning of the conflict the newest versionf of the Ki-46-II were able to performe their missions with almost complete freedom from interception as, without the benefit of ground control radar to guide them, the Allied squadron‘ obsolescent fighters failed to reach the elusive Nipponese aircraft in time.
When the USAAF deployed Lockheed P-38F Lightnings to the Pacific and the RAAF received some  Spitfire Supermarinere Mk.V for the defence of Darwin, the losses suffered by Ki-46-II units began to mount. Fortunately for the Japanese, the Koku Hombu had anticipated this situation and in May 1942 had instructed Mitsubishi to install their new 1,500 hp Ha-112-II engine in an improved version of the aircraft, the Ki-46-III, to increase maximum speed to 404 mph and endurance by one hour. To meet the requirement for increased flight duration, despite the higher fuel consumption of the new engines, it was necessary to redesign the fuel system and add a fuselage fuel tank in front of the pilot with a resultant increase in total capacity from 1,675 litres to 1,895 litres. Provision was also made for a ventral drop tank containing an additional 460 litres. The engine nacelles were also slightly enlarged to accommodate the Ha-112, a development oft he earlier Ha-101 engine fitted with a direct fuel injection system. The landing gear was strengthened to cope with the increased weight and no provision was made for a single flexible machine gun which, though installed on earlier models at the factory, had often been dispensed with in the field. However, the most significant change in external appearance was the redesign oft he foreward fuselage to provide a new canopy over the pilot’s seat without the step between the nose and the top of the fuselage which had characterized the earlier versions of the aircraft.

Completed in December 1942, two Ki-46-III prototypes underwent accelerated flight trials leading to a production order under the designation Army Type 100 Command Reconnaissance Plane Model 3. Both, the Ki-46-II, which remained in production until late in 1944, and the Ki-46-III were built at the Nagoya plant. However, when in December 1944 this plant was severely damaged by an earthquake and suffered further from the pounding inflicted by Boeing B-29 Superfortress’s oft he US 20th Air Force, production was transferred to a new plant at Toyama where only about one hundred machines were built. Late production Ki-46-IIIs coming off the Nagoya and Toyama lines were fitted with individual exhaust stacks providing some thrust augmentation and had sightly better speed and range.
Priority in delivery oft he Ki-46-IIIs was given to units operating in areas where Allied forces had achieved air superiority, but often they operated alongside the older Ki-46-IIs which they never completely supplanted. Once maintenance problems with the fuel injection system of the Ha-112-IIs engines had been solved, the Ki-46-IIIs, benefiting from markedly improved performance between 26,250 ft to 32,810 ft, proved to be a thorn in the Allies‘ side and only the faster climbing fighters under radar controll could successfully intercept the fast Nipponese machines which kept constant watch over the well defended bases as the B-29 airfields in the Marianas. However, as the war drew to its end, the Mitsubishi DINAH was no longer free from interception and losses rose alarmingly.
In total 609 Ki-46-III production aircraft, including fighter conversions were delivered between 1942 and 1945.
The aircraft shown here belongs to the Army Special Attack Unit “Sakura”, Kanoya Base, Kagoshima (Ref.: 1).