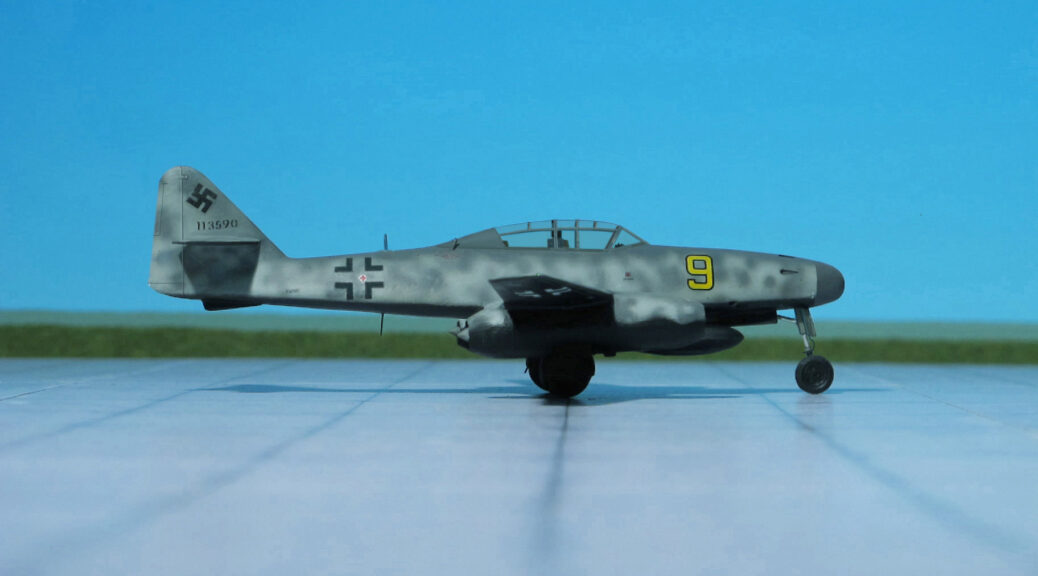 COMMENT: The Messerschmitt Me 262, nicknamed Schwalbe (German: “Swallow”) in fighter versions, or Sturmvogel (German: “Storm Bird”) in fighter-bomber versions, was the world’s first operational turbojet-powered fighter aircraft. Design work started before WW II began, but problems with engines, metallurgy and top-level interference kept the aircraft from operational status with the German Luftwaffe until mid-1944. The Me 262 was faster and more heavily armed than any Allied fighter, including the British turbojet-powered Gloster Meteor. One of the most advanced aviation designs in operational use during World War II, the Me 262’s roles included light bomber, reconnaissance and experimenat night fighter versions.
While the Messerschmitt Me 262 was not a difficult aircraft to fly, it possessed its share of idiosyncrasies, and some problems arose in the conversion of inexperienced pilots who had just completed their fighter training on piston-engined types. So it was obvious that traing would be simplified by the availability of a dual-control two-seater, and, accordingly, Messerscmitt evolved a suitable conversion trainer, the Messerschmitt Me 262B-1a.
Only some 15 examples of this trainer were delivered as the importance  attached to the introduction of the Me 262 as a nocturnal interceptor resulted in additional trainers on the assemblxy line being converted  as night fighters under the designation Messerschmitt Me 262B-1a/U1.
Whereas the Me 2626B1a/U was a hurried adaption of the training model, the Messerschmitt Me 262B-2a was considered as the definitive night-fighting sub-type for service from mid-1945. Structurally, the principal change consisted of the insertion of additional fuselage section fore and aft the tandem cockpits, increasing overall length more than 3.5 ft. This provided the necessary space to restore the 900 ltr resp. 600 ltr fuel tanks.
The first Me 262B-2a possessed similar radar to that of the Me262B-1a/U2, and the aircraft commenced flight trials in March 1945, but the drag of the „Hirschgeweih“ array, with its eight 7-mm-diameter dipoles, was such that it reduced maximum speed by 30 mph. Various attempts had been made to streamline the antennae, resulting in the „Morgenstern“ aerial system in which the short antennae protruded through the pointed nose cone, and it was calculated that this would restore 30 mph of the speed loss. In the event, it was decided to standardize on the centrimetric wavelength FuG 240 „Berlin“ radar with a disc scanner housed in a plastic radome above the nose-mounted cannon, this affording little or no drag. The second example of the Me 262B-2a, which was to have flown with „Berlin“ radar, was in the final stages of assembly at the time of Germany’s collaps. The Me 262B-2a retained the standard forward firing battery of four 30 mm MK 108 cannon, and, in addition, provision was made for two similar weapons in a „Schräge Musik“ arrangement immediately aft of the rear cockpit (Ref.: 7).