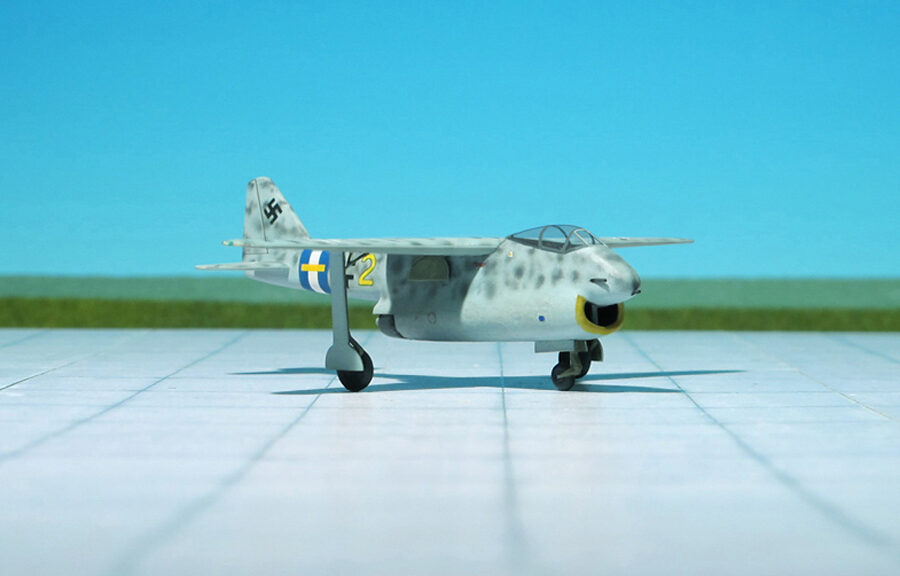 COMMENT: The Blohm & Voss P 202 was an unusual design study for a variable-geometry turbojet fighter during World War II. It was the first design to incorporate a slewed wing (also known as an oblique or scissor wing) in which one side swept forward and the other back.
During WW II in Germany intensive work has been done in concern of influence back-swept wings on high-speed aircraft. Calculations as well as wind-tunnel tests showed that swept wings could minimize the effects of compressibility as the speed of sound was approached. But sweeping the wings causes problems of its own, especially at the low speeds used for takeoff and landing. A variable-sweep mechanism was one possible solution but it would be complex, heavy and expensive. It also has problems with movement of the centre of lift. Both backwards and forwards sweep were investigated and they proved to have opposite disadvantages. Sweeping one wing forwards and the other back would balance out the aerodynamic problems and a one-piece slewed wing approach would not need such a complex sweep mechanism.
In 1944, with their project Bv P.202 the design team of Blohm & Voss tried to compensate the disadvantage of swept-back wings a low speed by turning a single full-span wing in its yaw axis so that one side sweeps back and the other side sweeps forward. The shoulder mounted wing was shaped as a disc in the mid-wing section. During take-off and landing as well as at lower speed the wing was in rectangular position with all buoyancy forces such as airbrakes and spoilers still effective. At high speeds the whole wing was slewed at 35° that the left wing showed forward and the right wing backward. The wing span was 39.4 ft when unswept and 32.8 ft when fully swept. Because the fuselage was filled with wing-rotation machinery, the landing gear extended down from the wing main spar, and was very long, while the nose gear retracted backwards into the fuselage. The Blohm & Voss Bv P.202 was powered by a pair of BMW 003 turbojets, slung underneath the fuselage center section and exhausting behind the wing. Provision for three forward-firing cannon was made in the nose. Due to the war situation in Germany the project never left the drawing board (Ref.: 18, 24).