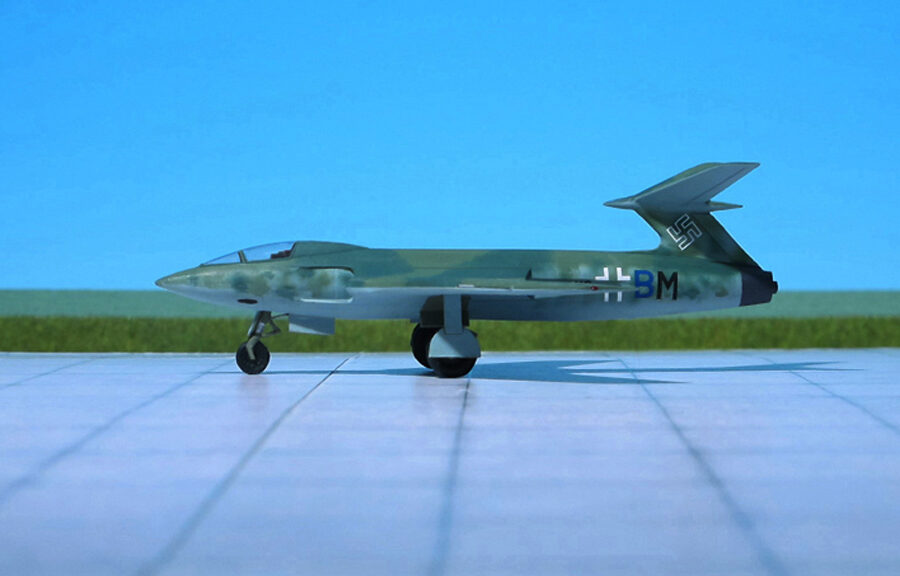 COMMENT: After the end of “WW II, when the Allied occupied Germany they found a huge amount of secret project documents. Among these were several unconventional designs from the Messerschmitt Company e. g. the so called “Animal Names” types. These were a single-turbojet  midget fighter “Libelle”  (Dragonfly) and two designs of the “Wespe I” and „Wespe II“ (Wasp) light fighters, a twin-engine fighter“ Me P.1079/18 „Schwalbe“(Swallow),  a bomber-transporter “Wildgans” (Brant) and two versions of a heavy ground-attacker “Zerstörer –  Projekt I” and „Zerstörer – Projekt II“ (Destroyer I and II).
As far as these latter are concerned these projects appear to consist of studies from the period 1941/42. But very unusual for Messerschmitt project drawings is that none of the dotted-outline turbojets matched  with the contures of any turbojets that were under development by BMW, Daimler-Benz, Heinkel-Hirth, Junkers and Porsche nor do the thrust figures quoted for them correpond to the known turbojet variants in production or development at that time.
An other confusing fact is that the Zerstörer ProjektII had the air intakes in the wing rootes and the sole turbojet engine was located in the rear fuselage. But additionally there were two openings on both sides the fuselage and the wings leading edges. This could be interpreted that the Zerstörer project II was powered by two turbojet engines.
On the other hand the high T-tailplane leads to the assumption of a later design period 1944/45. Focke-Wulf employed the T-taiplane for the first time in 1945 in the design of the Tank Ta 183. Messerschmitt, Heinkel and other aircraft manufacturers followed hastingly, as too little was known of the related flying characteristics of this type of tail surface. After the war the Allied quickly recognized its advantage and adopted this design feature.
Finally, a further factor indicating that the Zerstörer-designes were of later vintage is that both designes had a nosewheel tricycle undercarriage – a design feature that was first introduced in the Messerschmitt Me 262. Also, the rearward reclining seat and flush canopy blending into the fuselage nose contures  were not features of high-speed aircraft designes oft he 1941/42 period.
In conclusion and perhaps more likely is the fact that these designs are more after war fantasy than reality. So this comment is in contrast to the comment, given with the Messerschmitt Zerstörer-Projekt, Ausführung I, (Destroyer-project, Scheme I) on that website.