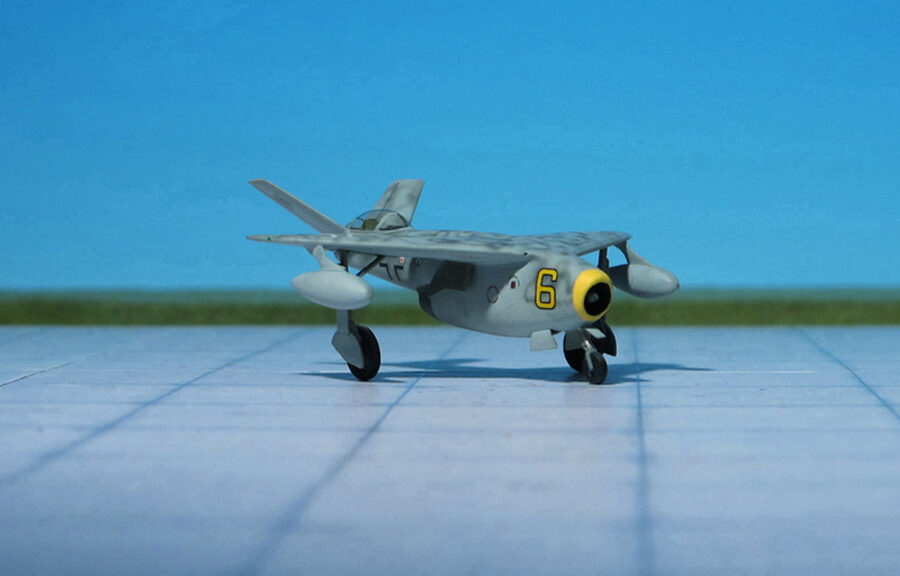 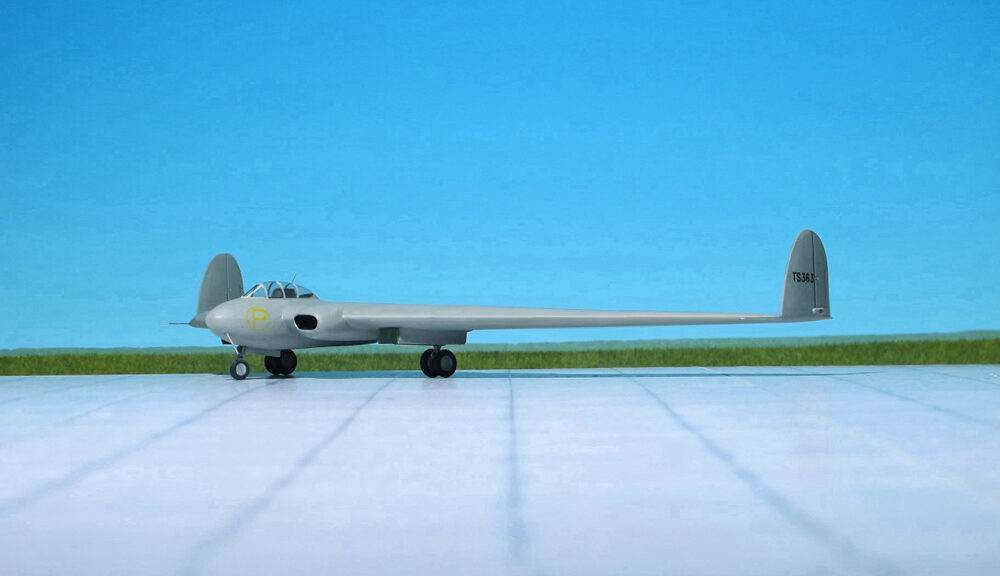 COMMENT: The Armstrong Whitworth A.W.52 was a British flying wing aircraft design of the late 1940s for research into a proposed flying wing bomber and/or jet liner. Three aircraft, the A.W.52G glider and two turbojet-powered research aircraft, were built for the programme. The airliner was cancelled but research flying continued until 1954.
Armstrong-Witworth Aircraft proposed a turbojet-powered six or four-engine flying wing bomber/airliner design, using a laminar flow wing, during the Second World War. This had to be a large aircraft in order to provide bomb bay resp. passenger head-room within the wing. The low-speed characteristics of the design were tested on a 16.41 m span wooden glider known as the A.W. 52G; the glider was designed to be roughly half the size of the powered A.W.52, which in turn would be about half the size of the airliner. Construction of the AW.52G began in March 1943, with the glider making its maiden flight, towed by an Armstrong Whitworth Whitley bomber, on 2 March 1945. Flight testing, with tug releases from 20,000 ft giving flights of around 30 min continued, mostly satisfactorily until 1947. In 1944, Armstrong Whitworth received a contract that would allow them to produce two A.W.52 prototypes for evaluation, nominally asmail carrying aircraft.
The A.W.52 was intended for high speeds and was an all-metal turbojet-powered aircraft, with a retractable undercarriage; aerodynamically it had much in common with the glider. Both aircraft were moderately-swept flying wings with a centre section having a straight trailing edge. The wing tips carried small (not full chord) end-plate fin and rudders, which operated differentially, with a greater angle on the outer one. Roll and pitch were controlled with evelons that extended inward from the wing tips over most (in the case of the A.W.52 about three-quarters) of the outer, swept part of the trailing edge. The elevons moved together as elevators and differentially as ailerons. They were quite complicated surfaces – which included trim tabs – and hinged not from the wing but from “correctors”, which were wing-mounted; the correctors provided pitch trim. To delay tip stall, air was sucked out of a slot just in front of the elevons, by pumps powered by undercarriage-mounted fans on the glider and directly from the engine in the A.W.52. The inner centre section wing carried Fowler flaps and the upper surface of the outer section carried spoilers.
Maintenance of laminar flow over the wings was vital to the design and so they were built with great attention to surface flatness. Rather than the usual approach, where skinning is added to a structure defined by ribs, the A.W.52’s wings were built in two halves (upper and lower) from the outside in, starting from pre-formed surfaces, adding stringers and ribs then joining the two halves together. The result was a surface smooth to better than 2/1000 of an inch.
The crew sat in tandem in a nacelle so that the pilot was just forward of the wing leading edge, providing a better view than in the glider. The pressurised cockpit was slightly off-set to port. The engines were mounted in the wing centre section, close to the centre line and so not disturbing the upper wing surface.
The first prototype flew on 13 November 1947 powered by two Rolls-Royce Nene turbojet engines of 2.240 kp thrust each. This was followed by the second prototype on 1 September 1948 with the lower-powered  Rolls-Royce Dervent engines, rated at 1.580 kp each. Trials were disappointing: laminar flow could not be maintained, so maximum speeds, though respectable, were less than expected. As in any tail-less aircraft, take-off and landing runs were longer than for a conventional aircraft (at similar wing loadings) because at high angles of attack, downward elevon forces were much greater than those of elevators with their large moment.
The first prototype crashed without loss of life on 30 May 1949, making it the first occasion of an emergency ejection by a British pilot. Despite the termination of development, the second prototype remained flying with the Royal Aircraft Establishment until 1954 (Ref.: 27).