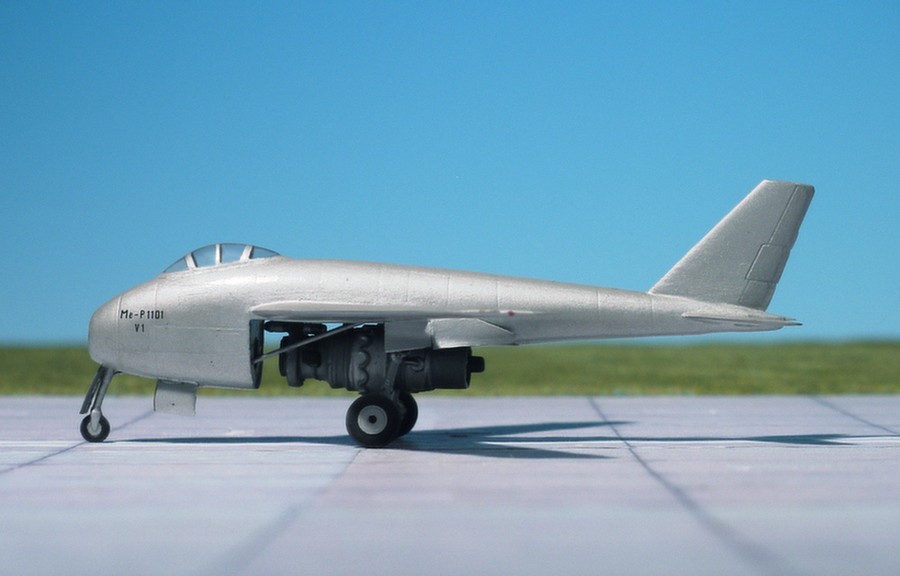 COMMENT: In July 1944 the RLM released specification for second generation of jet fighters in context with the Emergency Fighter Program (Jäger-Notprogramm). Subsequently the Messerschmitt Company proposed a project designated Me P.1101. The initial design (Me P.1101/XIII)  had a short and wide fuselage, tricycle landing gear, and mid-mounted wings with an inner sweep of 40 degree near the fuselage, and a shallower 26 degree outboard. The single HeS 011 jet engine was to be mounted internally within the fuselage, being aspirated by two rounded intakes located on either side of the cockpit. The high tail was of a V configuration, and mounted on a tapered boom which extended over and past the jet exhaust, while the cockpit was forward mounted, with the canopy integrated into the fuselage and forming part of the rounded nose of the aircraft. This design was further developed, including a longer nose, and after the wind tunnel testing of a number of wing and fuselage profiles, the decision was made to undertake the construction of a full-scale test aircraft. This finalized design and associated test data were submitted to the Construction Bureau on 10 November 1944 and the selection of production materials was begun on 4 December 1944. In February 1945, the RLM settled on a competing design, the Focke-Wulf Ta 183, as the winner of the Emergency Fighter Program. Since considerable work had already been done on the P.1101 design, the RLM decided to continue reduced funding in order for Messerschmitt to carry out experimental flights testing the swept back wing at anticipated speeds up to Mach 1. The worsening war situation led to the expedited, but risky, approach of building a full-scale prototype in parallel with detail construction and continuing statistical calculation, while existing components such as the wings of the Messerschmitt Me 262, landing gear, based on that of the Messerschmitt Bf 109, and flight components were utilized where feasible. It was also intended for the test flights to be conducted with 35, 40, and 45 degree wing sweep. Production of the V1 prototype was begun at Messerschmitt’s Bavarian Oberammergau Complex with a projected first flight in June 1945. By the time an American infantry unit discovered the Oberammergau complex on 29 April 1945, the V1 prototype was approximately 80% complete. Wings were not yet attached and appear to have never had skinning applied to their undersides. The airframe was removed from the nearby tunnel in which it was hidden and all associated documents were seized. Later the prototype was shipped to the United States, first to Wright Patterson AFB, then in 1948 to the Bell Aircraft Works. Damage ruled out any possibility for repair although some of the Me P.1101’s design features were subsequently used by Bell as the basis for the Bell X-5, which was the first aircraft capable of varying its wing geometry while in flight (Ref.: 23).