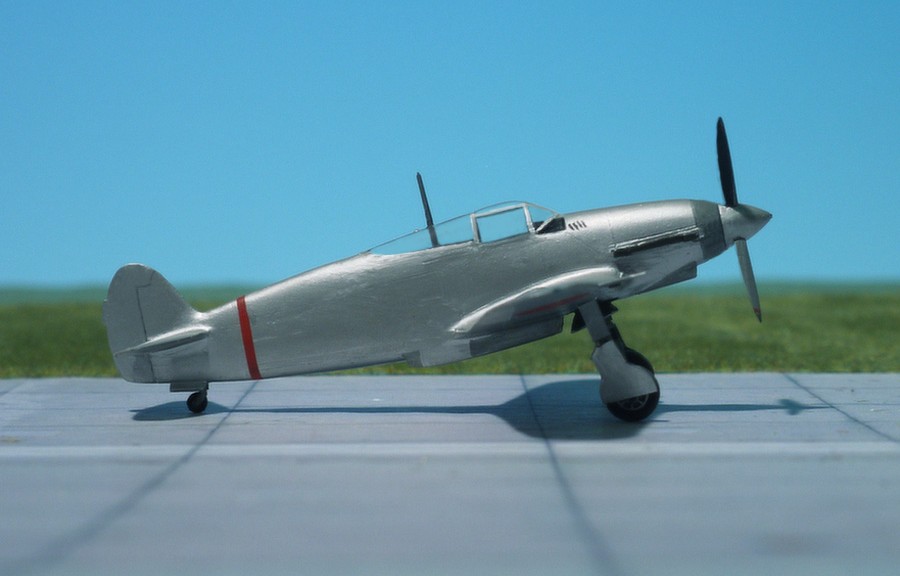 COMMENT: The Kawasaki Ki-60 was an experimental fighter that used a license-built German Daimler-Benz (Kawasaki) DB 601 liquid-cooled engine. This was at that time an unusual choice because the majority of Japanese aircraft used air-cooled radial engines. The Ki-60 was designed by Kawasaki Aircraft Industries in response to a 1939 Imperial Japanese Army Aviation Bureau requirement for a heavily armed specialised interceptor fighter to be powered by the liquid-cooled Daimler-Benz DB 601 inverted V12 engine, which had been selected for license production by Kawasaki as the Ha-40. A requirement was issued at the same time for a lighter, less heavily armed, general-purpose fighter which was to be designed almost in parallel with the Ki-60; this became the Kawasaki Ki-61 Hien. Priority was to be given to the Ki-60, design of which started in February 1940. The first prototype of the Ki-60 emerged in March 1941 as a compact monoplane with a relatively deep fuselage and tapered wings with rounded tips built around a system of three spars. The pilot’s seat was mounted high over the rear spar, giving the fuselage a distinctive “humped” profile; the hood featured a framed, rear sliding canopy and an elongated rear transparent section. The main coolant radiator was housed in a long ventral bath under the wing center-section and central fuselage, while the oil cooler was mounted under the engine with a long air intake. The prototype was powered by an imported Daimler-Benz DB 601A as production of the Ha-40 had not yet started. Although a top speed of 370 mph had been projected the Ki-60 was only able to achieve 341 mph. By this time the Nakajima Ki-44 Hajabusa, which had also been designed as a dedicated interceptor, was beginning to show some promise and the Koku Hombu selected this in fulfilment of its requirements. From early 1941 the full attention was focused on the Kawasaki Ki-61 Hien, but the Ki-60 became important in that the Ki-61 design was able to be improved using the lessons learned from the poor characteristics of the Ki-60. Plans for production were cancelled in late 1941 after three airplanes had been built. (Ref.: 23)