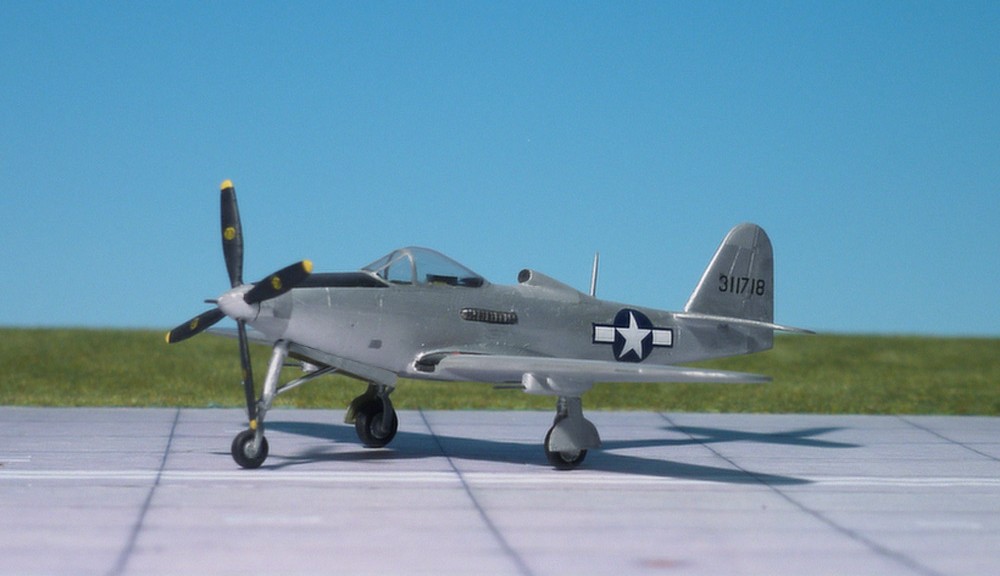 COMMENT: The Bell P-63 Kingcobra was an American fighter aircraft that was developed by Bell Aircraft during Worlf War II. Based on the preceding Bell P-39 Airacobra, the P-63’s design incorporated suggestions from P-39 pilots and was superior to its predecessor in virtually all respects. The P-63 was not accepted for combat use by the United States Army Air Forces. However, it was used during World War II by the Soviet Air Force which had also been the most prolific user of the P-39.
While the P-39 had originally been introduced as an interceptor, later in its development it was decided to reduce the cost and complexity of the engine by removing the turbocharger. High-altitude performance suffered dramatically as a result, and Bell proposed an experimental series to test out a variety of solutions.
The resulting XP-39E featured two primary changes from the earlier P-39D from which it was developed. One was a redesigned wing. The root airfoil was changed to gain internal volume. The other was a switch to the Continental I-1430 engine, which featured an improved overall design developed from the hyper engine efforts, as well as an improved supercharger.
Three prototypes were ordered in April 1941.The I-1430 was having continued development problems and could not be delivered in time, so it was replaced by an Allison V-1710-47, similar to that powering the P-39. Each prototypes tested different wing and tail configurations.  The XP-39E proved faster than standard Airacobra, reaching a maximum speed of 386 at 21,680 ft during tests. However, the XP-39E was considered inferior to the stock P-39 Airacobra in all other respects, so it was not ordered into production.
Although the XP-39E proved disappointing, the USAAF was nevertheless interested in an even larger aircraft based on the same basic layout. Even before its first flight, the USAAF placed an order on 27 June 1941 for two prototypes of an enlarged version powered by the same V-1710-47. The new design was given the designation Bell XP-63 Kingcobra. A third prototype was also ordered, using the Packard V-1650, the U.S.-built version of the Rolls-Royce Merlin engine.
The XP-63 was larger in all dimensions than the Airacobra. The wing was redesigned again, this time with new NACA laminar flow airfoils, wing span increased to 38 ft 4 in, and wing area was increased to248 sq ft. The engine was fitted with a second remotely mounted supercharger, supplementing the normal single-stage supercharger. At higher altitudes, when additional boost was required, a hydraulic clutch would engage the second supercharger, adding 10,000 ft to the service ceiling. A larger four-bladed propeller was also standardized. A persistent complaint against the Airacobra was that its nose armament was not easily accessible for ground maintenance, and in order to cure this problem, the XP-63 airframe was fitted with larger cowling panels.
he first prototype flew for the first time on 7 December 1942. It was destroyed on 28 January 1943 when its landing gear failed to extend. The second prototype followed on 5 February 1943. It, too, was destroyed, this time due to an engine failure. The Merlin-engined prototype was delivered with another Allison instead, an Allison V-1710 -93, which had a war emergency rating of 1,500 hp at sea level, making this prototype one of the fastest Kingcobras built, attaining 421 mph at 24,100 ft.
Deliveries of production P-63As began in October 1943. The USAAF concluded the Kingcobra was inferior to the Mustang, and declined to order larger quantities. American allies, particularly the Soviet Union, had a great need for fighter aircraft, however, and the Soviets were already the largest users of the Airacobra. Therefore, the Kingcobra was ordered into production to be delivered under Lend-Lease.
Soviet input was significant. With the Soviet Union being the largest buyer of the aircraft, Bell was quick to implement their suggestions. The vast majority of the changes in the P-63A sub-variants were a direct result of Soviet input, e.g. increased pilot armor and fuselage hardpoint on the A-5, underwing hardpoints and extra fuel tanks on the A-6, etc. Most significantly, Soviet input resulted in moving the main cannon forward, favorably changing the center of gravity, and increasing its ammo load from 30 to 58 rounds for the A-9 variant. The P-63 had an impressive roll rate, besting the Americans’ Republic P-47, Curtiss P-40, and North American P-51—and the Japanese Navy’s Kawanishi N1K2 Shiden-Kai fighter—with a rate of 110° per second at 275 mph.
In general, official Soviet histories played down the role of Lend-Lease supplied aircraft in favor of local designs, but it is known that the P-63 was a successful fighter aircraft in Soviet service. A common Western misconception is that the Bell fighters were used as ground attack aircraft.
3.303 aircraft had been completed when the assembly lines stopped at the end of WW II (Ref.: 24)