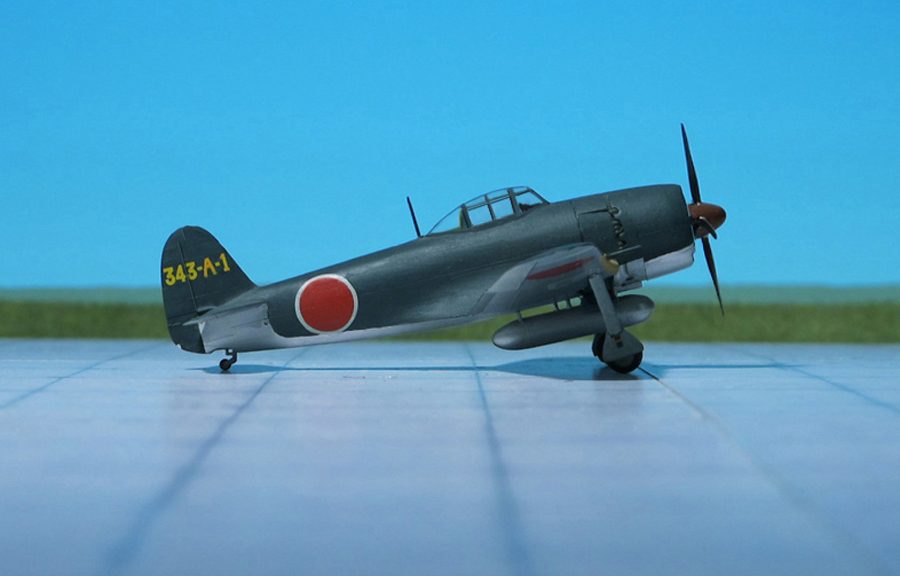 COMMENT: In 1943, while the Kawanishi N1K1-J “Shiden” was being evaluated by the Japanese Navy, preliminary design work on an advanced version of the aircraft had already begun at Kawanishi and the N1K1-J was placed in production only as a stop-gap measure pending availability of a new version designed N1K2-J. The prime reason for designing the N1K2-J was to eliminate the need for a long and complex undercarriage of the earlier version, and consideration was also given to simplifying construction and maintenance. To achieve this goal, the wings were moved to the lower fuselage, conventional main gear legs of reduced length were adopted and the fuselage and tail surfaces were entirely redesigned. The result was a virtually new aircraft retaining only the wings and armament of the N1K1-J.
The prototype of the N1K2-J “Shiden-Kai” (“Violet Lightning-Modified”) was flown for the first time on December, 1943, and successfully completed its manufacture’s trials within fifteen weeks before handed over to the Navy in April 1944. Despite persistent difficulties with the unreliable “Homare 21” engine, the N1K2-J had all the qualities of a successful fighter aircraft and production aircraft began rolling off the assembly lines. Unfortunately for the Japanese, the production fell considerably behind schedule as bombing by Boeing B-29 “Superfortresses” led to shortage of engines and equipment. The companies involved in the “Shiden-Kai” production program delivered only a token number of aircraft.
In operation the N1K2-J revealed itself as a truly outstanding fighter capable of meeting on equal terms of best Allied fighter aircraft. Against the high-flying B-29s the “Shiden-kai” was less successful as its climbing speed was insufficient and the power of the “Homare 21” fell rapidly at high altitudes.
In total 423 N1K2-J “Shiden-Kai” were produced including eight prototypes (Ref.: 1).