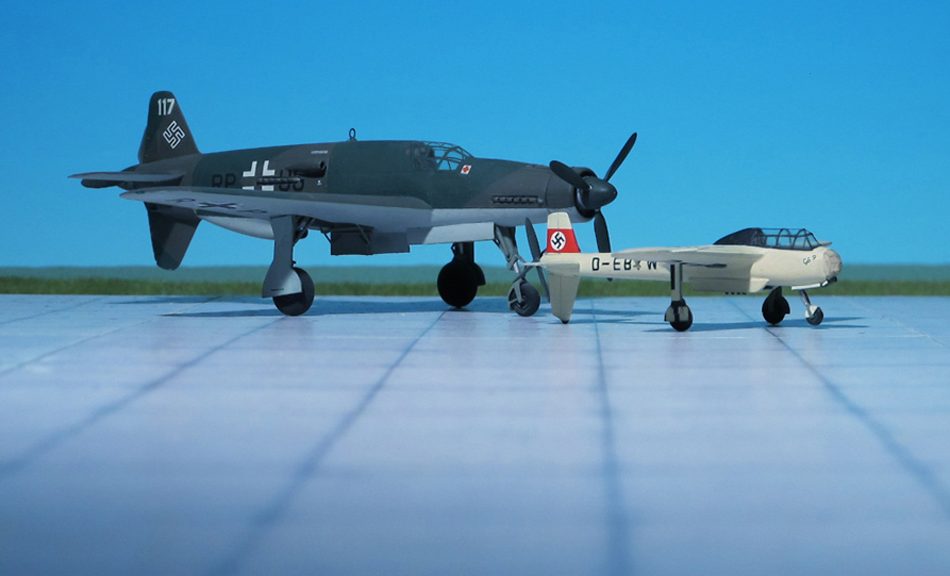 COMMENT: The Göppingen Gö 9 was a research aircraft built to investigate the practicalities of powering a plane using a pusher propeller located far from the engine and turned by a long driveshaft. In 1937, Claudius Dornier observed that adding extra engines and propellers to an aircraft in an attempt to increase speed would also attract a penalty of greater drag, especially when placing two or more engines within nacelles mounted on the wings. He reasoned that this penalty could be minimized by mounting a second propeller at the rear of an aircraft. In order to prevent tail-heaviness, however, the engine would need to be mounted far ahead of it. Dornier patented this idea and commissioned a test plane to evaluate it. This aircraft was designed by Dr. Hütter as a 40% sized, scaled-down version of the Dornier Do 17 ‘Fast bomber’ fuselage and wing panels without the twin-engine nacelles, and built by Schempp-Hirth at Wüsterberg. The airframe was entirely of wood and used a retractable tricycle landing gear – one of the earliest German airframe designs to use such an arrangement. Power was supplied by a Hirth HM 60 inverted, air-cooled inline four-cylinder engine mounted within the fuselage near the wings. Other than the engine installation, the only other unusual feature of the aircraft was its all-new, full four-surface cruciform tail, which included a large ventral fin/rudder unit of equal area to the dorsal surface. This fin incorporated a small supplementary tail-wheel protruding from the ventral fin’s lower tip that assisted in keeping the rear-mounted, four-blade propeller away from the ground during take-off and landing. The Gö 9 carried the civil registration D-EBYW. Initially towed aloft by a Dornier Do 17, flight tests began in June 1941, but later flights operated under its own power. The design validated Dornier’s ideas, and he went ahead with his original plan to build a high-performance aircraft with propellers at the front and rear, producing the Dornier Do 335 ‘Pfeil’ (‘Arrow’) the fastest fighter aircraft in service during WW II. The eventual fate of the Gö 9 is not known (Ref.: 24)