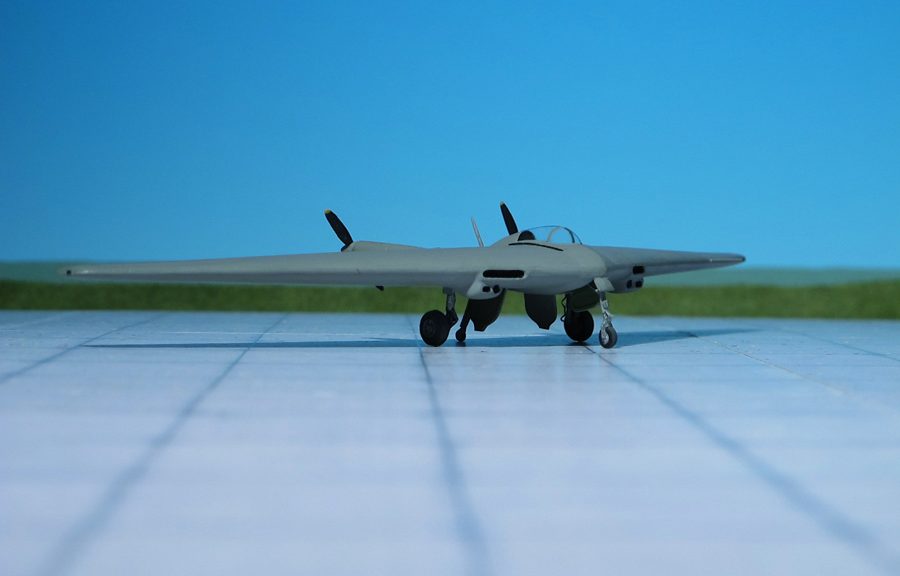 COMMENT: The Northrop N-9M was considered an approximately one-third scale, 60-ft span all-wing aircraft used for the development of the full size, 172-ft wide Northrop XB-35 and YB-35 flying wing long-range, heavy bomber. On October 1941, the preliminary order for development of the B-35 Flying Wing bomber was confirmed, including engineering, testing, and most importantly a 60 ft (18 m) wingspan, one-third scale aircraft, designated N-9M. It was to be used in gathering data on flight performance and for familiarizing pilots with the program’s radical, all-wing design. The first N-9M was ordered in the original contract, but this was later expanded to three test aircraft in early 1943. A fourth was ordered a few months later after a crash of the first N-9M destroyed that airframe; this fourth N-9M incorporated various flight test-derived improvements and upgrades, including different, more powerful engines. The four aircraft were designated N-9M-1, -2, -A, and -B, respectively. The N-9M framework was partially constructed of wood to reduce its overall weight. The wings’ outer surfaces were also skinned with strong, specially laminated plywood. The central section (roughly equivalent to the fuselage) was made of welded tubular steel. The first flight of the N-9M occurred on 27 December 1942. During the next five months, 45 flights were made. Nearly all were terminated by mechanical failures of one sort or another, the Menasco engines being the primary source of those problems. After roughly 22.5 hours of accumulated flight time, the first N-9M crashed on 19 May 1943. Northrop’s Flying Wing bomber program was canceled in mid 1944, and all remaining N-9M flight test aircraft, except for the final N-9MB, were scrapped (Ref. 24).