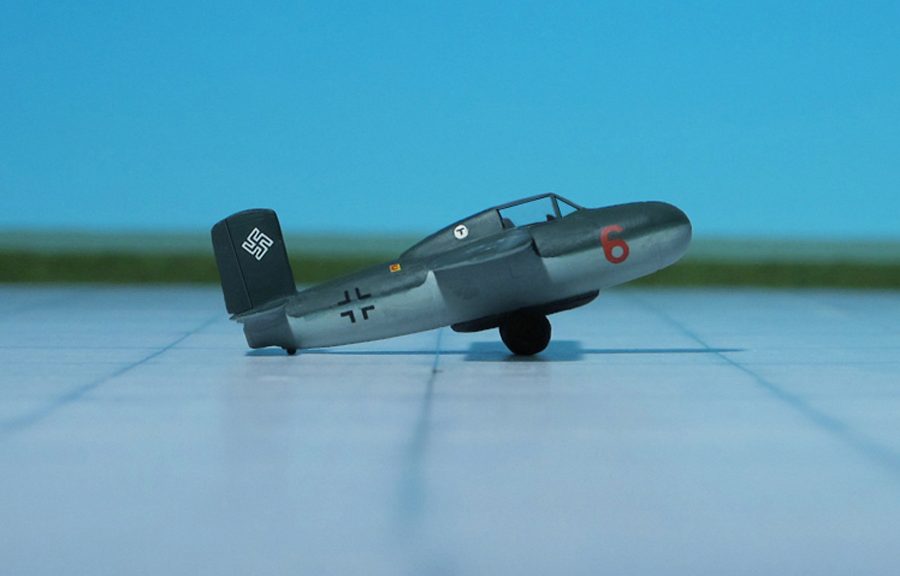 COMMENT:  In mid 1944 the RLM called for proposals of a small, cheap, easy to build, reusable short-range, high speed interceptor in the context of the ‘Miniaturjägerprogramm’ (Miniature fighter program).  Aircraft companies such as Bachem,  Focke-Wulf, Heinkel, Junkers and Messerschmitt submitted proposals: Bachem Ba 349 ‘Natter’ (‘Grass Snake’), Focke-Wulf Fw ‘Volksjäger’, (‘People Fighter’), Heinkel He P.1077 ‘Julia’, Junkers EF 126 ‘Lilli’, Junkers EF 127 ‘Walli’ and Messerschmitt the designs Me P.1103 and Me P.1104, each in several variants. The Messerschmitt Me P.1104/II design was a simple wooden construction with a cylindrical fuselage, the wings were shoulder-mounted and un-swept so as the tail-plane. Power was provided by a Walter HWK 509A-2 liquid-fuel rocket engine with a main combustion chamber of 1.700 kp thrust and a smaller cruising chamber of 300 kp thrust. The pilot was in a conventional seated position, the armament consisted of one single MK 108 30 mm cannon beneath the cockpit.  For take-off the fighter was positioned on a trolley so as the Messerschmitt Me 163 ‘Komet (‘Comet’) that was jettisoned when the aircraft was airborne. The tiny plane was towed by a Messerschmitt Me 109G or Messerschmitt Me 262A-1 towards the enemy, released when in attack position and ignited the rocket motor. After attack the aircraft glided back to its base and landed on retractable skids. As with projects of other companies all work was cancelled in favour of the Bachem Ba 349 ‘Natter’ (Ref.: 17, 20)