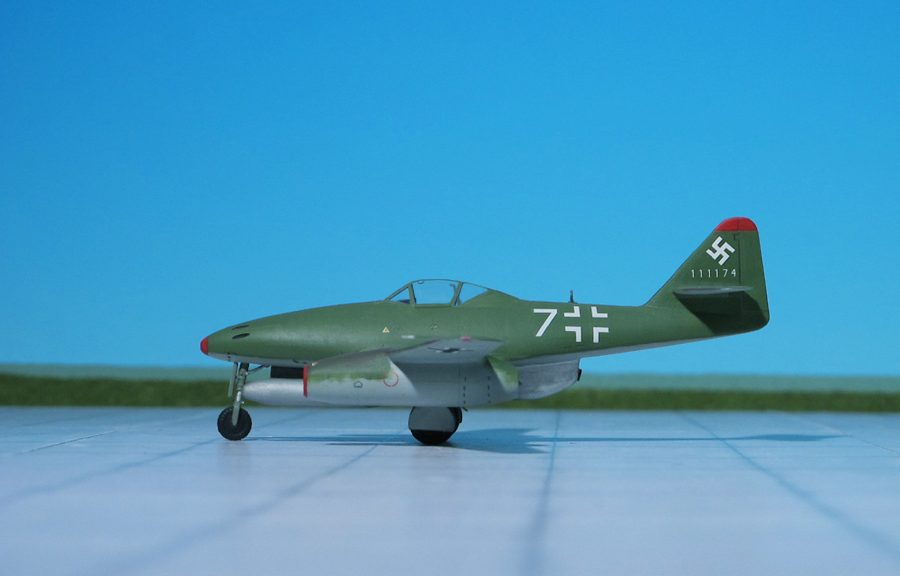 COMMENT: The major disadvantage displayed by the ‘Heimatschützer I’ had been the strict limitation imposed on J2 tankage (for the Jumo 004 turbojet engines) by the internally mounted rocket motor, and the need to use some of the available tankage for its propellants. The Messerschmitt Me 262C-3a ‘Heimatschützer IV’, therefore, had a Walter R II-211/§ rocket motor slung beneath the fuselage with ‘C-Stoff’  and ‘T-Stoff’ tanks  mounted on modified bomb carriers immediately ahead of the power plant. The rocket motor was jettisonable, and was to be dropped by parachute after the fuel had been consumed. Fuel was fed to the power plant by means of a flexible line, but difficulties were encountered with the fuel feed as a level of tanks was slightly below that of rocket combustion chamber, and these had not been resolved when further work on the Messerschmitt Me 262C-3a ‘Heimatschützer IV’ terminated.
Another ‘Heimatschützer’, the Messerschmitt Me 262C-3 ‘Heimatschützer III’ was a proposed version of the basic Me 262A-1a with Junkers Jumo 004 turbojet engines replaced with Walter HWK RII-211 liquid-fueled rocket engines (Ref.: 7).