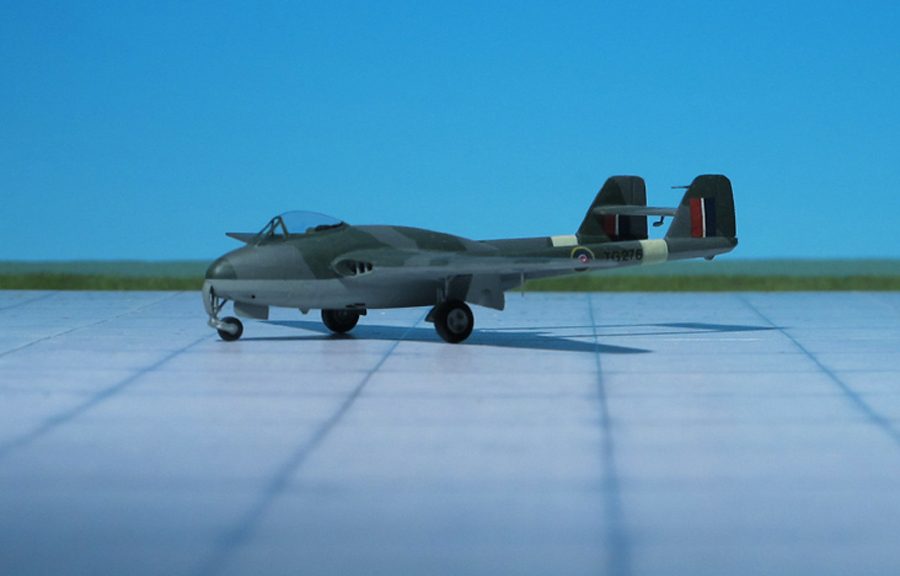 COMMENT: The de Havilland ‘Vampire’ was a British turbojet fighter developed and manufactured during the WW II to harness the newly developed turbojet engine. The ‘Vampire’ entered service with the RAF in 1945 and was the second jet fighter, after the Gloster ‘Meteor’, operated by the RAF, and its first to be powered by a single jet engine. After Air Ministry specification E.6/41 was raised to provide official support for two prototypes of the jet fighter, design work on the DH.100 began at the de Havilland works in mid-1942, two years after the ‘Meteor’. Originally named the ‘Spider Crab’, the aircraft was entirely a de Havilland project, exploiting the company’s extensive experience in building with moulded plywood for aircraft construction. Many of the basic design features were first used in their famous ‘Mosquito’ fast bomber. It had conventional straight mid-wings and a single jet engine placed in an egg-shaped, aluminum-skinned fuselage, exhausting in a straight line. Armament was four 20mm Hispano Mk V cannon under the nose, with air brakes in the wings to slow the aircraft so as to be able to get into a firing position behind slower aircraft – a feature also incorporated in the ‘Meteor`. The Vampire was considered to be a largely experimental design due to its unorthodox arrangement and the use of a single engine, unlike the Gloster ‘Meteor’ which was already specified for production. The low power output of early jet engines meant that only twin-engine aircraft designs were considered practical; but as more powerful engines were developed, particularly Halford’s H.1 (later known as the ‘Goblin’), a single-engined jet fighter became possible. De Havilland were approached to produce an airframe for the H.1, and their first design, the DH.99, was an all-metal, twin-boom, tricycle undercarriage aircraft armed with four cannon. The use of a twin boom kept the jet pipe short, avoiding the power loss of a long pipe that would have been needed in a conventional fuselage. The DH.99 was modified to a mixed wood-and-metal construction in light of Ministry of Aircraft Production recommendations, and the design was renumbered to DH.100 by November 1941. The first prototype made its maiden flight on September 1943, only six months after the ‘Meteor’s’ maiden flight. The first Vampire flight had been delayed due to the need to send the only available engine fit for flight to America to replace one destroyed in ground engine runs in Lockheed’s prototype XP-80 Shooting Star. The production Vampire Mk I did not fly until April 1945, with most being built by English Electric Aircraft factories due to the pressures on de Havilland’s production facilities, which were busy with other types. Although eagerly taken into service by the RAF, it was still being developed at war’s end, and never saw combat in the Second World War.

Noteworthy is the fact that the de Havilland DH 100 “Vampire” had great similarity with the contemporary German Focke-Wulf Projekt VII “Flitzer” (“Streaker” or “Dasher”) (Ref.: 24).