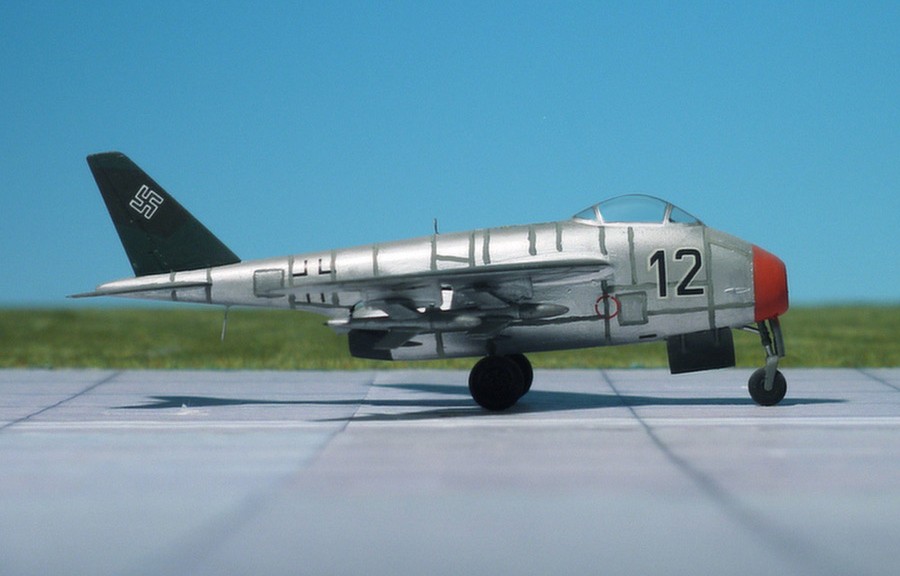 COMMENT: However, there is some evidence that a further production version of the Me P.1101 was on Messerschmitt’s drawing boards. All over dimensions, turbojet engines, tricycle undercarriage etc. are unchanged to its predecessor, the wing was swept back to 40 degree and a normal or horizontal tail unit – “T-Tail” was provided. Cockpit armor was fitted and up to four Kramer X-4 air-to-air guided missiles could be carried.

The Kramer X-4 was the first air-to-air guided missile that entered the production lines. It featured a tapering, cigar-shaped fuselage, with four small swept wings and four smaller tail fins. At the ends of two of the opposing wings were small pods which held the wires that unwound during the X-4’s flight. On the wing tips of the other two main wings were simple flares to aid the pilot in keeping the X-4 on the intended path. The tail unit contained small spoilers which could control the missiles pitch and yaw. Power was supplied by the BMW 109-548 liquid-fuel rocket engine with 1,600 kp thrust for 33 seconds. A warhead weighing 20 with a destructive blast radius of 25 feet was mounted in the nose of the missile, being detonated by the pilot, impact or by an acoustical proximity fuse, tuned to the pitch of the bomber’s propellers. First air launched test took place on August, 1944 by a Focke-Wulf  Fw 190. Tests continued through early February 1945, also by Junkers Ju 88s as well as by a Messerschmitt  Me 262 jet fighter with two X-4 missiles under the wings outboard of the jet nacelle, but were not launched  (Ref.: 16).