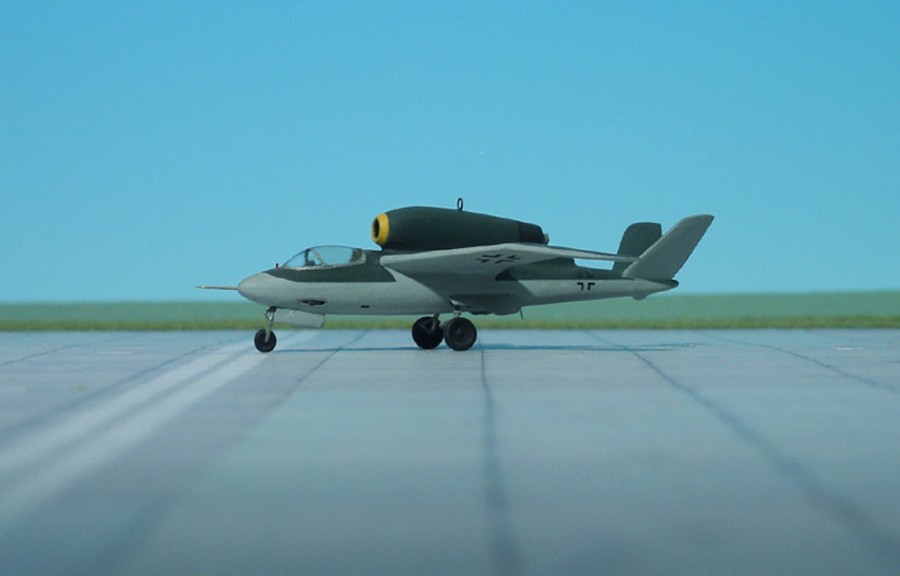 COMMENT: Progressive development of the basic Heinkel He 162 design led to the He 162C. This project utilized the B-series fuselage and the more powerful Heinkel-Hirth HeS 011A turbojet, had wings swept back 38 degrees at the leading edge, and a V-type or “butterfly” tail. This latter was tested by the He 280 V8. The new wing featured a coarse anhedral angle from two-thirds span.
The He 162C was envisaged as a target-defence interceptor and it was proposed to equip the fighter  with a variation of “Schräge Musik” (Jazz music, Luftwaffe term for fixed weapons firing obliquely upward) with a pair of 30-mm MK 103 cannon on special mountings enabling them to be tilted upwards at a fine angle from the horizontal. This enabled the guns to be fired while the fighter underflew the target.
The He 162C project was not realized, but when the Heinkel factory at Schwechat, Austria, was occupied by Allied troops, a half-completed prototype for the Heinkel-Hirth HeS 0114A-powered model was found, this having interchangeable swept-back (He 162C) and swept-forward wings (He 162D). (Ref.: 7)