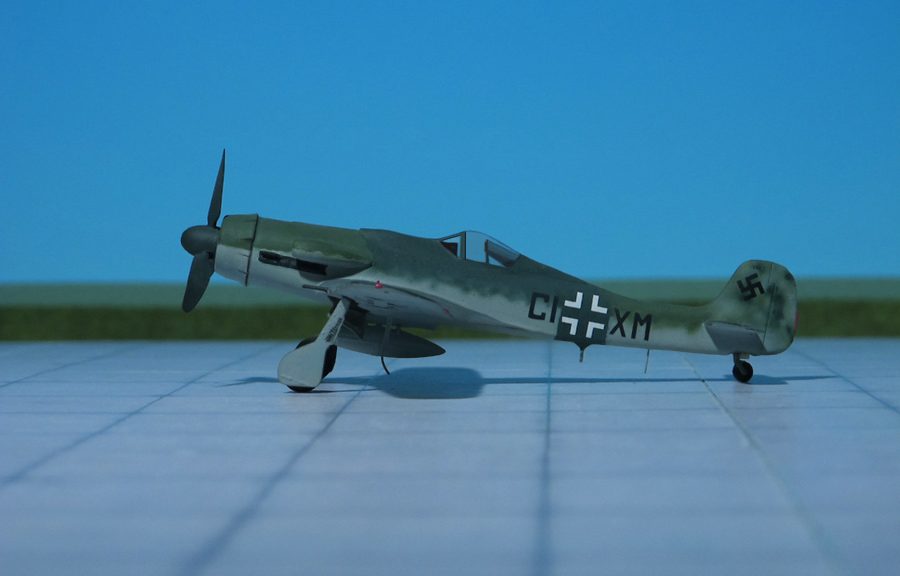 COMMENT: By autumn 1942, it was obvious that despite earlier opinions, the USAAF had every intension of building up an immense bomber force in Britain for use against Germany, mainly Boeing B-17 “Flying Fortress” and Consolidated B-24 “Liberator”. Furthermore, intelligence reports revealed that tremendous impetus was being placed behind the mass production of a larger, pressurized successor, the Boeing B-29 “Superfortress”, capable of operations at still greater speeds and altitudes. Thus, the development of fighters possessing higher combat ceilings had assumed greater urgency. Both Focke-Wulf and Messerschmitt were, therefore, asked to submit their proposals for a “Hochhleistungsjäger” (High-performance fighter), offering a substantially improved combat ceiling and amenable to adaption for a medium-to-high altitude reconnaissance-fighter role. To meet the requirements Focke-Wulf proposed the Fw 190Ra-2 and Ra-3, a variant based on the Fw 190D, and Messerschmitt offered a long-span derivative of the Me 109, the Me 155B. These submissions were accepted by the “Technische Amt” (Technical Office of the RLM) but in August 1943 it became clear that Messerschmitt was too committed with other development programmes to devote sufficient attention to the Me 155B, this being duly passed to Blohm & Voss.
Prof. Tank, director of Focke-Wulf’s design team, worked on his proposals Fw 190Ra-2 and Ra-3 that soon would receive the RLM type designations Ta 152H and Ta 152K, respectively. Tank envisaged the short-span variant as primarily a “Begleitjäger” (Escort fighter), and the long-span version as a “Höhenjäger” (High-altitude fighter). Furthermore, Tank pressed for permission to install the turbo-charged Daimler-Benz DB 603 engine in the Ta 152 fighter owing to its indisputable superiority to the Junkers Jumo 213E engine, installed in the Focke-Wulf Fw 190D, at high altitudes. The short-span Fw Ta 152C, as it was designated now, was broadly of similar aerodynamic concept to that of the Fw 190D, but was structurally an entirely new airframe. Although test flights showed excellent handling characteristics and performance and although a production order was placed in autumn 1944 the General-Luftzeugmeister Amt (Department of the Chief of Aircraft Procurement and Supply) decided on November 1944 that the highest priority had been given to four key warplanes, the Heinkel He 162, the Messerschmitt Me 262, the Arado Ar 234, and the Dornier Do 335. So all work on the Ta 152 was stopped (Ref.: 7).