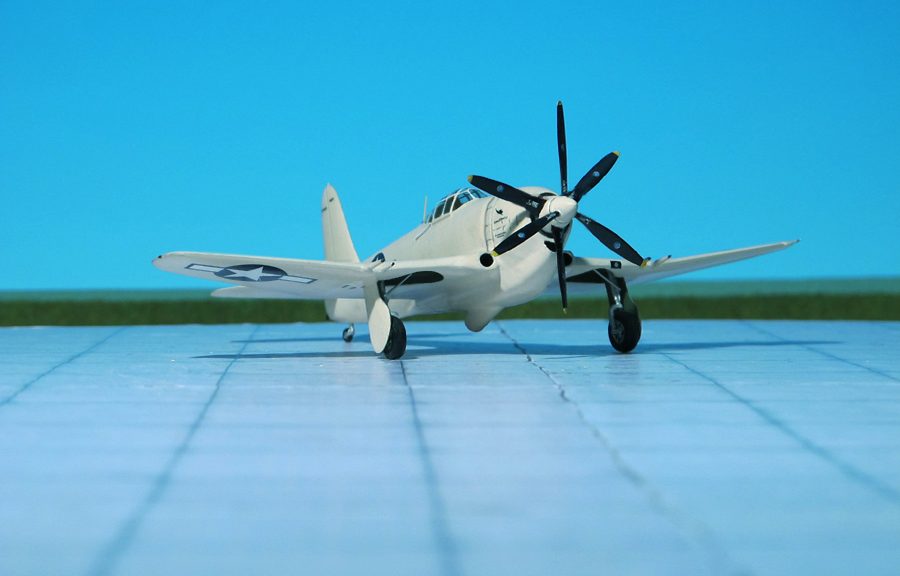 COMMENT: In early 1941, the Curtiss Aircraft Company proposed the development of a high-performance, heavily-armed fighter designed around a liquid-cooled engine. At that time the US Navy was dedicated to using air-cooled engines, but Curtiss experience with the Curtiss P-40 gave the company good grounds for its faith in the liquid-cooled unit, and on June 1941 it received a Navy contract for two prototypes of such an aircraft, to be designated XF14C-1. The chosen power plant was the still experimental Lycoming XH-2470-4 which was expected to deliver 2,200 hp at sea level, with a normal rating of 2,000 hp at 4,500 ft.  With an armament four 20-mm cannon in the wings, the XF14C-1 was expected to have a maximum speed of 374 mph at 17,000 ft and a service ceiling of 30,500 ft. However, wind tunnel testing by Navy engineers during 1942 cast some doubts on the validity of these figures  and with development of the XH-2470 engine lagging, the Navy eventually concluded that the performance of the XF14C-1 would be inadequate by the time it was ready to enter service, and the programme was cancelled in December 1943.
As the first airframe was then virtually complete, the Navy suggested it be flown with the air-cooled Wright R-3350 ‘Cyclone’ engine, driving six-blade contra props. In this guise, the Curtiss fighter was redesignated XF14C-2, and the first flight was made in July 1944. Performance again fell below expectation, a speed of 398 mph being reached at 32,000 ft compared with the estimated of 424 mph, and the R-3350 was still suffering from a number of teething problems. Meantime the progress of the Pacific war made further development of the XF14C-2 unnecessary, the programme being cancelled in the early month of 1945 (Ref.: 10).