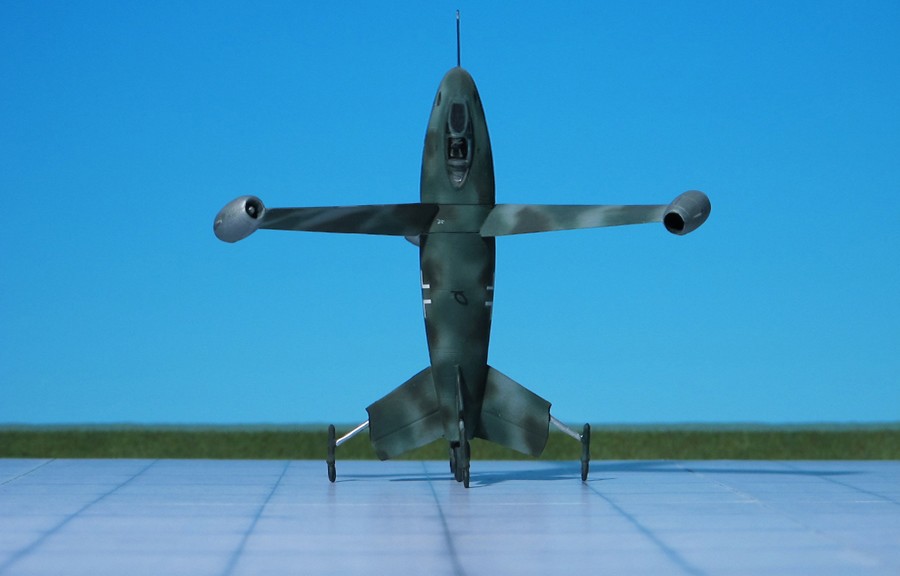 ACCOMMODATION: Pilot only, in seated position

POWER PLANT: Three Pabst/Lorin ramjets at wingtips, rated at 840 kp thrust each. For starting ramjets Walther 109-500 solid-fuel rockets were fitted to each ramjet, rated at 500 kp for 30 seconds each

COMMENT:  This Focke-Wulf Vertical Take-Off and Landing (VTOL) fighter/interceptor project was designed in September 1944, at the same time when the Heinkel Company worked on its VTOL-projects “Lerche” and “Wespe”. But in contrast to the latter two designs the propulsion system of the Focke-Wulf project was radical different. Three untapered wings rotated around the fuselage and had a gradually decreasing pitch towards the wingtips, thus acting like a giant propeller (“Triebflügel”). At the end of each wing was a Pabst ramjet. Since ramjets do not operate at slow speeds, the wing-rotor had to be driven by small Walter rocket engines, fitted to each ramjet pod. When the plane was sitting on its tail in the vertical position, the rotors would have functioned similarly to a helicopter. When flying horizontally, they would function more like a giant propeller. A cruciform empennage at the rear of the fuselage comprised four tail planes, fitted with moving ailerons that would also have functioned as combined rudders and elevators. A single large and sprung wheel in the extreme end of the fuselage provided the main undercarriage. Four small castoring wheels on extensible struts were placed at the end of each tail plane to steady the aircraft on the ground and allow it to be moved. The main and outrigger wheels were covered by streamlined clamshell doors when in flight. When taking off, the rotors would be angled to give lift as with a helicopter or, more accurately, a gyrodyne. Once the aircraft had attained sufficient altitude it could be angled into level flight. This required a slight nose-up pitch to provide some downward thrust as well as primarily forward thrust. Consequently, the four cannons in the forward fuselage would have been angled slightly downward in relation to the center line of the fuselage. The rotors provided the only significant lift in horizontal flight. To land, the aircraft had to slow its speed and pitch the fuselage until the craft was vertical. Power could then be reduced and it would descend until the landing gear rested on the ground. This would have been a tricky and probably dangerous maneuver given that the pilot would be seated facing upward and the ground would be behind his head at this stage. Unlike some other tail sitter aircraft, the pilot’s seat was fixed in the direction for forward flight. The spinning rotor would also obscure rear vision. Although the “Triebflügeljäger” project was not realized, a wind tunnel model was tested up to a speed of Mach 0.9 (Ref.: 17, 18, 23)