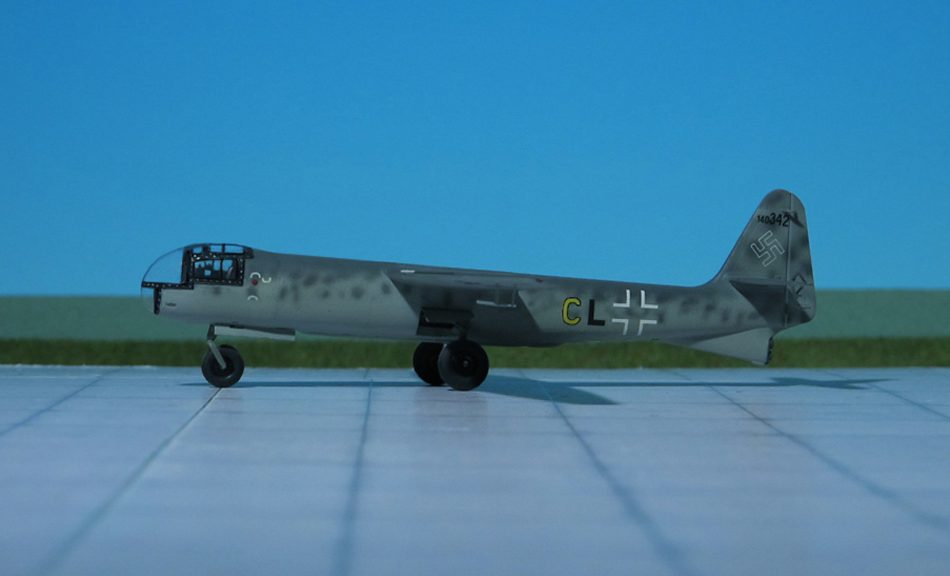 COMMENT: In 1944 the Arado design team proposed a two liquid-rocket engines powered reconnaissance versions of the Arado Ar 234 “Blitz” (Lightning) high-speed bomber. The Arado Ar 234R, as it was designated, would consist of a regular Arado Ar 234C frame but without turbojet engines. Instead two pods were installed under the wing, each containing a Walter HWK 109-509A bi-fuel rocket engine (project Ar 234R-1A). The second project Ar 234R-1B was to be powered by a Walter HWK 109-509C two chamber liquid-fuel rocket engine mounted in the rear section. Therefore a cowling would have been installed in the rear fuselage underneath the rudder. The upper rocket engine called “Steigofen” (Accelerate chamber) delivered 2,000 kp and was to be used for climbing to altitude while the lower rocket engine, “Marschofen” (Cruising chamber) delivered 400 kp thrust and was used to power the aircraft during horizontal flight. During return flight – over a distance of more than 155 miles ­– the aircraft flew as a glider without power. The wing had a laminar profile with its maximal thickness at 50 to 60% chord. The glide ratio was calculated to 1:14.
Because of the limited fuel capacity and short endurance of the rocket engines the Ar 234R-1b was to be towed by a Heinkel He 177 “Greif” heavy bomber. A possible reconnaissance mission in the London area was calculated as follows: After take-off from a Luftwaffe base near Paris the aircraft was towed to the operational altitude of app. 26,247 ft, reached near Calais. After release of towline with “Steigofen” at full throttle the aircraft was powered at a speed of app. 506 mph to an altitude of app. 55,775 ft. This height was reached in a few minutes app. near the coast of Dover. During horizontal flight intermittent ignition of the “Marschofen” accelerated the aircraft with 569 mph to the target (i. e. London). After photo mission the aircraft flew back to the coast of England at a speed of 541mph and the descent back to the home base was flown as a glider. The mission was estimated for 21 minutes.
Although the Arado Ar 234R-1B project was promising it was abandoned in favor of the DFS 228 reconnaissance rocket-driven glider giving even better ceiling of 75,460 ft (Ref: 16).