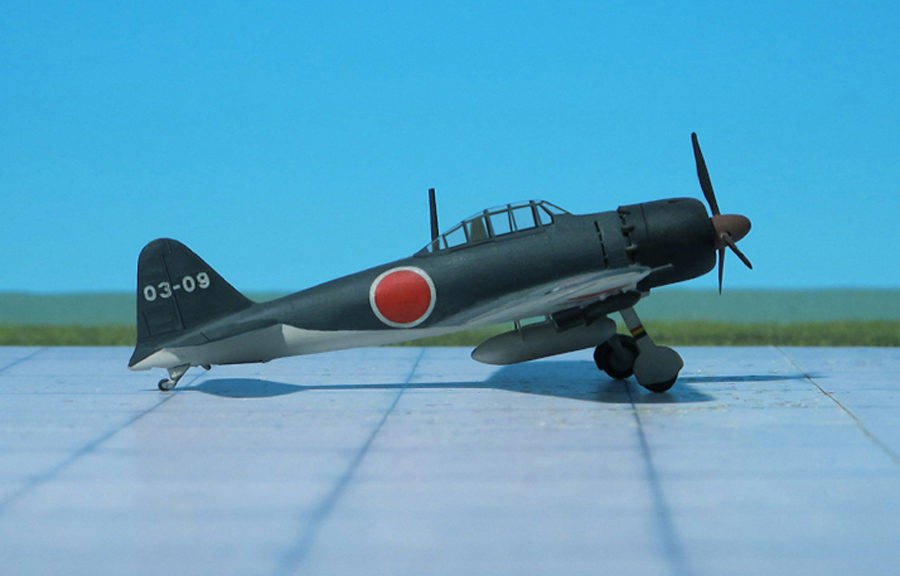 COMMENT: The Mitsubishi A6M “Zero” was the best known Japanese warplane of WW II. A6M “Zeros” were predominantly used by the Imperial Japanese Navy Air Service (IJN) on aircraft carriers, and also by its land-based fighter units. At the start of the Pacific War in 1941, the A6M constituted about 60% of the IJN fighter force. It took part in carrier operations throughout much of the Pacific Ocean, as well as over the northeast Indian Ocean
The Mitsubishi A6M “Zero” is a long-range fighter aircraft formerly manufactured by Mitsubishi Aircraft Company. Officially, the A6M was designated as the Mitsubishi Navy Type 0 carrier fighter (“Rei-shiki-kanjō-sentōki”), or the Mitsubishi A6M “Rei-sen”. The A6M was usually referred to by its pilots as the “Reisen” (Zero fighter), “0” being the last digit of the Imperial Year 2600 (1940) when it entered service with the Imperial Navy. The official Allied reporting name was “Zeke”, although the use of the name “Zero” was later adopted by the Allies as well.
The “Zero” was considered the most capable carrier-based fighter in the world when it was introduced early in WW II, combining excellent maneuverability and very long range. The IJN also frequently used it as a land-based fighter.
With its low-wing cantilever monoplane layout, retractable, wide-set conventional landing gear and enclosed cockpit, the “Zero” was one of the most modern carrier based aircraft in the world at the time of its introduction. It had a fairly high-lift, low-speed wing with very low wing loading. This, combined with its light weight, resulted in a very low stalling speed of well below 69 mph. This was the main reason for its phenomenal maneuverability, allowing it to out-turn any Allied fighter of the time.
The “Zero” quickly gained a fearsome reputation. Thanks to a combination of unsurpassed maneuverability — even when compared to other contemporary Axis fighters — and excellent firepower, it easily disposed the motley collection of Allied aircraft sent against it in the Pacific in 1941. It proved a difficult opponent even for the British Supermarine “Spitfire”.  Although not as fast as the British fighter, the “Zero” could out-turn the “Spitfire” with ease, sustain a climb at a very steep angle, and stay in the air for three times as long. In early combat operations, the “Zero” gained a legendary reputation as a dogfight achieving an outstanding kill ratio of 12 to 1, but by mid-1942 a combination of new tactics and the introduction of better equipment enabled Allied pilots to engage the “Zero” on generally equal terms. By 1943, due to inherent design weaknesses and an inability to equip it with a more powerful aircraft engine, the “Zero” gradually became less effective against newer Allied fighters. By 1944, with opposing Allied fighters approaching its levels of maneuverability and consistently exceeding its firepower, armor, and speed, the A6M had largely become outdated as a fighter aircraft. However, due to design delays and production difficulties, which hampered the introduction of newer Japanese aircraft models, the “Zero” continued to serve in a front line role until the end of the war in the Pacific. During the final phases, it was also adapted for use in Kamikaze operations.
Japan produced more “Zeros” than any other model of combat aircraft during the war. When the war in the Pacific Area of Action ended, 10,939 aircraft have been built by Mitsubishi Jukogyo K.K. and Nakajima Hikoki K.K. in four major variants A6M2, A6M3, A6M5, and A6M8, each variant including several subtypes. Nakajima built a float-plane variant, the Nakajima A6M2-N, Allied reporting name “Rufe”.
The Mitsubishi A6M5c, Model 52 Hei, featured an armament change: One 13.2 mm Type 3 machine gun was added in each wing outboard of the cannon, and the 7.7 mm gun on the left side of the cowl was deleted. Four racks for rockets or small bombs were installed outboard of the 13 mm gun in each wing. Engine changed to a Nakajima NK1F “Sakae21” although some sources state that the A6M5c had a more powerful “Sakae 31” engine. In addition, a 55 mm thick piece of armored glass was installed at the headrest and an 8 mm thick plate of armor was installed behind the seat. The mounting of the central 300 l (79 US gal) drop tank changed to a four-post design. Wing skin was thickened further. The first of this variant was completed in September 1944 (Ref.: 24).