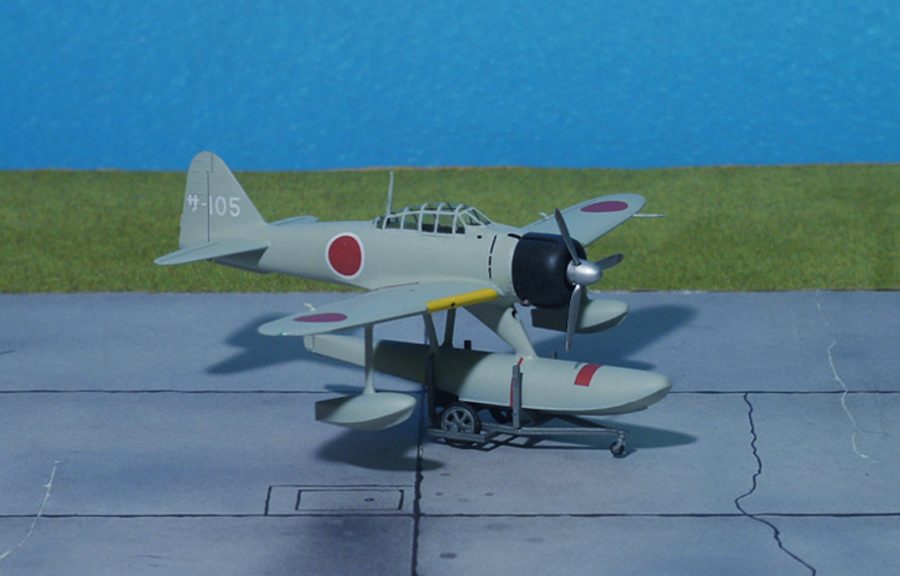 COMMENT: The Nakajima A6M2-N (Navy Type 2 Interceptor/Fighter-Bomber) was a single-crew floatplane based on the Mitsubishi A6M “Zero” Model 11. The Allied reporting name for the aircraft was “Rufe”.
The A6M2-N floatplane was developed from the Mitsubishi A6M “Zero” Type 0, mainly to support amphibious operations and defend remote bases. It was based on the A6M-2 Model 11 fuselage, with a modified tail and added floats.
The aircraft was deployed in 1942, referred to as the “Suisen 2” (“Hydro fighter type 2”), and was only utilized in defensive actions in the Aleutians and Salomon Islands operations. Such seaplanes were effective in harassing American PT boats at night. They could also drop flares to illuminate the PTs which were vulnerable to destroyer gunfire, and depended on cover of darkness.
The seaplane also served as an interceptor for protecting fueling depots they also served as fighters aboard seaplane carriers “Kamikawa Maru” in the Salomons and Kuriles areas and aboard Japanese raiders “Hokaku Maru” and “Aikoku Mari” in Indian Ocean raids. In the Aleutian Campaign this fighter engaged with RCAF Curtiss P-40 “Warhawk”, Lockheed P-38 “Lightning” fighters and Boeing B-17 “Flying Fortress” bombers. The aircraft was used for interceptor, fighter-bomber, and short reconnaissance support for amphibious landing, among other uses.
Later in the conflict the Otsu Air Group utilized the A6M2gs-N as an interceptor alongside Kawanishi N1K1 “Kyofu”(“Rex”) aircraft based in Biwa lake in the Honshū area.
The large float and wing pontoons of the A6M2-N degraded its performance by only about 20%. However, this caused the A6M2-N to be unable to confront the first generation of Allied fighters. A total of 327 were built, including the original prototype (Ref. 24).