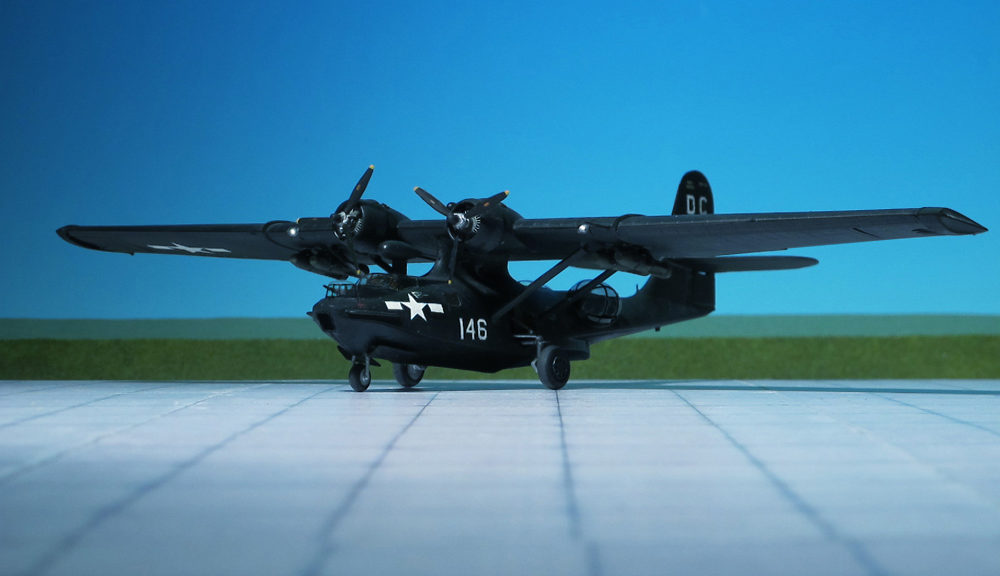 ACCOMMODATION: Crew of seven to nine

COMMENT: The PBY was originally designed as a patrol bomber, an aircraft with a long operational range intended to locate and attack enemy transport ships at sea in order to disrupt enemy supply lines. With a mind to a potential conflict in the Pacific Ocean, where troops would require resupply over great distances, the US Navy in the 1930s invested millions of dollars in developing long-range flying boats for this purpose. Flying boats had the advantage of not requiring runways, in effect having the entire ocean available. Several different flying boats were adopted by the Navy, but the PBY was the most widely used and produced.
Although slow and ungainly, Consolidated PBY “Catalinas” distinguished themselves in World War II. Allied forces used them successfully in a wide variety of roles for which the aircraft was never intended. PBYs are remembered for their rescue role, in which they saved the lives of thousands of aircrew downed over water. “Catalina” airmen called their aircraft the “Cat” on combat missions and “Dumbo” in air-rescue service.
Consolidated and Douglas both delivered single prototypes of their new designs, the XP3Y-1 and XP3D-1, respectively. Consolidated’s XP3Y-1 was an evolution of the XPY-1 design that had originally competed unsuccessfully for the P3M contract two years earlier and of the XP2Y design that the Navy had authorized for a limited production run. Although the Douglas aircraft was a good design, the Navy opted for Consolidated because the projected cost was only $90,000 per aircraft.
Consolidated XP3Y-1 design (company Model 28) had a parasol wing with external bracing struts, mounted on a pylon over the fuselage. Wingtip stabilizing floats were retractable in flight to form streamlined wingtips and had been licensed from the British Saunders-Roe company. The two-step hull design was similar to that of the P2Y, but the Model 28 had a cantilever cruciform tail unit instead of a strut-braced twin tail. Cleaner aerodynamics gave the Model 28 better performance than earlier designs. Construction is all-metal, stressed-skin, of aluminum sheet, except the ailerons and wing trailing edge, which are fabric covered
The Consolidated XP3Y-1 had its maiden flight on March 1935, after which it was transferred to the US Navy for service trials. The XP3Y-1 was a significant performance improvement over previous patrol flying boats. The Navy requested further development in order to bring the aircraft into the category of patrol bomber, and in October 1935, the prototype was returned to Consolidated for further work, including installation of 900 hp R-1830-64 engines. For the redesignated XPBY-1, Consolidated introduced redesigned vertical tail surfaces which resolved a problem with the tail becoming submerged on takeoff, which had made lift-off impossible under some conditions. The XPBY-1 had its maiden flight on May 1936, during which a record non-stop distance flight of 3,443 miles was achieved.
Around 4.051 aircraft were built, and these operated in nearly all operational theatres of World War II. The “Catalina” served with distinction and played a prominent and invaluable role against the Japanese. This was especially true during the first year of the war in the Pacific, because the Consolidated PBY “Catalina” and the Boeing B-17 “Flying Fortress” were the only aircraft available with the range to be effective in the Pacific.
The Consolidated PBY “Catalina” was built in seven major variants, the last, PBY-6A, was equipped with search radar in a radome above the cockpit, a taller fin and rudder and amphibious undercarriage (Ref.: 24).