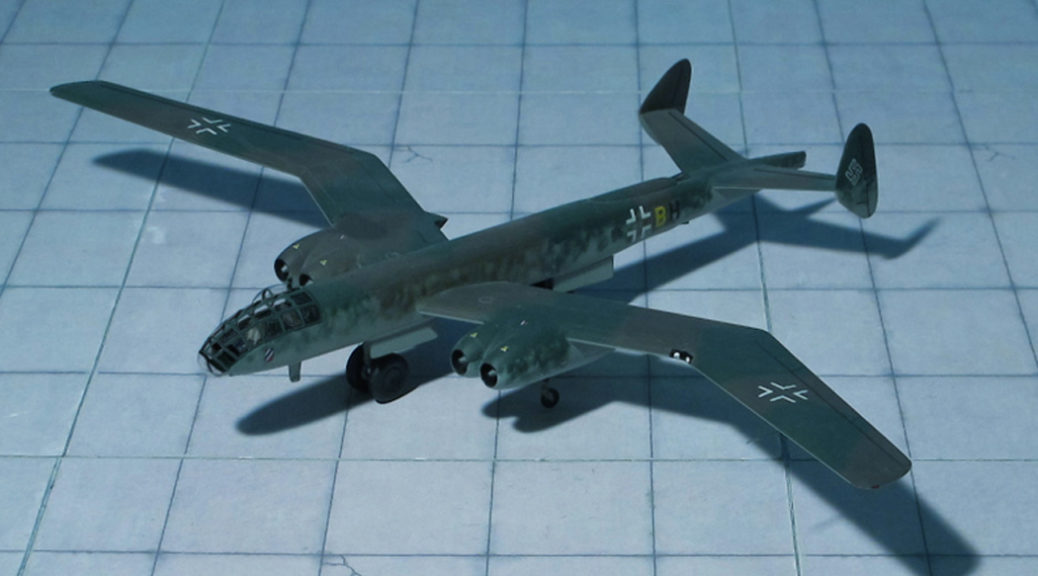 COMMENT:  With its Blohm & Voss Bv P.188 bomber projects the aircraft company proposed several different designs that would have been powered by four powerful turbojet engines. Most unusual was a long, specifically W-shaped wing design. The wings were placed –­ differing of project – from high to low on the fuselage side. Common to all projects was the layout of wings: their inner halves were swept back 20 degrees while the outer halves were swept 20 degrees forward. It was hoped that this arrangement would provide a better performance, both at high and low speeds.
The Blohm & Voss Bv P.188 bomber project had three different known variants. Blohm & Voss Bv P.188.01 was powered by four turbojets placed in separate nacelles under the wings. The W-shaped wing was placed high on the fuselage, the tail section was of a conventional type.
Very similar in design was the Blohm & Voss Bv P.188 02 except for a smaller, slightly raised cockpit, the wings were placed in mid-fuselage and a tail with a twin rudder arrangement.
The last design was the Blohm und Voss P.188.04 turbojet bomber. The fuselage center section was designed as an armored steel shell which was to hold the fuel supply, with the forward and rear sections being bays for the tandem twin main landing gear wheels. The W-shaped wing was place low on the fuselage and had a constant 3 degree dihedral. A crew of two sat in tandem in an extensively glazed, pressurized cockpit, which was flush with the fuselage. Four Junkers Jumo 004C turbojet engines were mounted in two nacelles, which were located beneath each wing, very similar to the Arado Ar 234C “Blitz” (“Lightning”) turbojet bomber. There were also an auxiliary ‘outrigger’ type landing gear outboard of the engine nacelles, these being more to steady the aircraft, and did not touch the ground when it was on an even keel. The tail was of a twin fin and rudder design, with a dihedral tail plane and the extreme tail had an airbrake. Armament consisted of two remote-controlled FDL 131 Z twin 13mm machine guns, guided by two PVE 11 periscopes aft of the cockpit, and firing to the rear. A bombload of 2000 kg could be carried externally. None of these futuristic projects were realized (Ref: 17, 24).