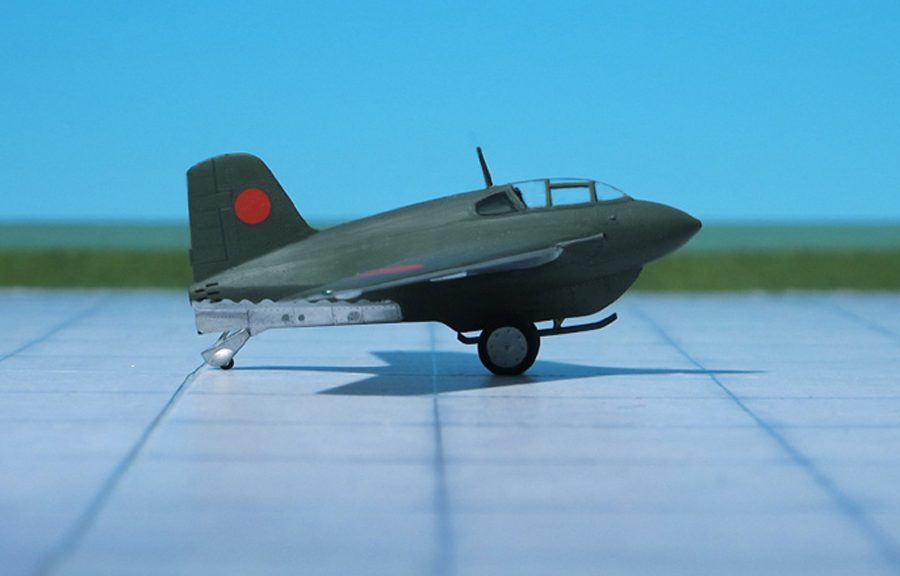 COMMENT: The Mitsubishi J8M “Shūsui” (literally “Autumn Water”, used as a poetic term meaning “Sharp Sword” deriving from the swishing sound of a sword) was a Japanese WW II rocket-powered interceptor aircraft closely based on the German Messerschmitt Me 163 “Komet” (Comet”). Built as a joint project for both the Japanese Navy and the Army Air Services, it was designated J8M (Navy) and Ki-200 (Army).
The Ki-200 and the J8M1 differed only in minor items, but the most obvious difference was the JAAF’s Ki-200 was armed with two 30 mm Type 5 cannon (with a rate of fire of 450 rounds per minute and a muzzle velocity of 720 m/s, while the J8M1 was armed with two 30 mm Ho-105 cannon (rate of fire 400 rounds per minute, muzzle velocity 750 m/s). The Ho-105 was the lighter of the two and both offered a higher velocity than the German MK 108 cannon of the Messerschmitt Me 163 (whose muzzle velocity was 520 m/s).
The Toko Ro.2 (KR10) rocket motor did not offer the same thrust rating as the original, and Mitsubishi calculated that the lighter weight of the J8M1 would not offset this. Performance would not be as good as that of the Me 163 “Komet”, but was still substantial. The engine still used the German propellants of T-Stoff oxidizer and C-Stoff fuel (hydrogen peroxide/methanol-hydrazine), known in Japan as “Ko” and “Otsu” respectively.
At the end of the war “Shusui” production was already under way. Additionally, the Navy had instructed Mitsubishi, Nissan and Fuji to design a further Navy version as J8M2 with only one cannon thus giving additional space for more fuel and by that more endurance, while the Army ordered Rikugun Kokugijutsu Kenkyujo the development of an enlarged version of the Ki-200 with increased fuel tankage, known as Mitsubishi Ki-202 “Shusui Kai” to be built by Mitsubishi (Ref.: 1, 24).