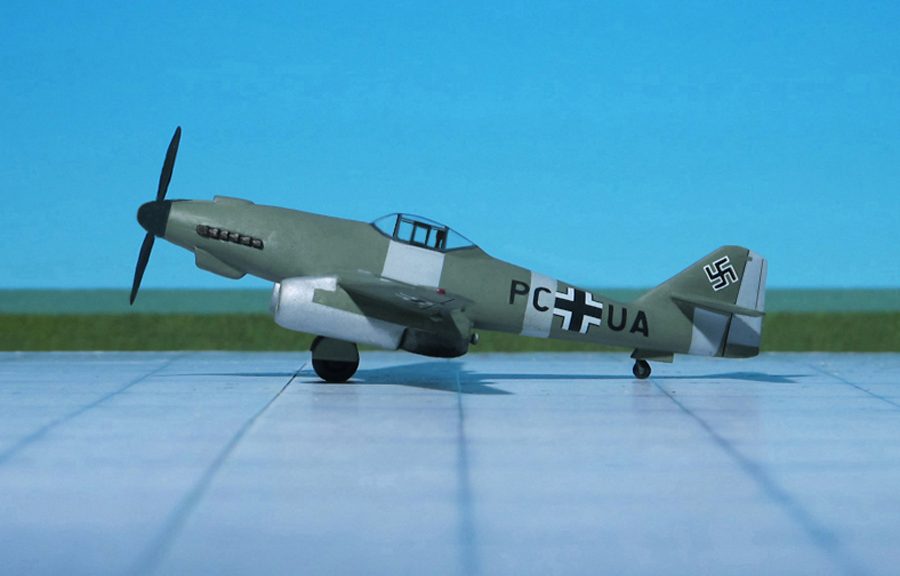 COMMENT: Several years before World War II, the Germans foresaw the great potential for aircraft that used the turbojet engine constructed by Hans Joachim Pabst von Ohain, engineer with the Heinkel Company, in 1936. After the successful test flights of the world’s first jet aircraft—the  Heinkel He 178, Messerschmitt and his design bureau adopted the turbojet engine for an advanced fighter aircraft. As a result, the Messerschmitt Me 262 was already under development as “Projekt 1065” (P.1065) before the start of World War II. The project originated with a request by the Reichsluftfahrtministerium (RLM, Ministry of Aviation) for a turbojet aircraft capable of one hour’s endurance and a speed of at least 530 mph. Dr. Waldemar Voigt headed the design team, with Messerschmitt’s chief of development, Robert Lusser, overseeing.
Plans were first drawn up in April 1939, and the original design was very different from the aircraft that eventually entered service, with wing root-mounted engines, under development by BMW as 003 or by Junkers as Jumo 004, rather than podded ones, when submitted in June 1939. The progression of the original design was delayed greatly by technical issues involving the new turbojet engine. Because the engines were slow to arrive, Messerschmitt moved the engines from the wing roots to underwing pods, allowing them to be changed more readily if needed; this would turn out to be important, both for availability and maintenance. Since the BMW 003 jets proved heavier than anticipated, the wing was swept slightly, by 18.5°, to accommodate a change in the center of gravity. Funding for the turbojet engine program was also initially lacking as many high-ranking officials thought the war could easily be won with conventional aircraft.
Test flights began on 18 April 1941, with the Me 262 V1 example, bearing its “Stammkennzeichen” (radio code letters) of PC+UA, but since its intended BMW 003 turbojets were not ready for fitting, a conventional Junkers Jumo 210 piston engine was mounted in the V1 prototype’s nose, driving a propeller, to test the Me 262 V1 airframe. After successful trials demonstrating good flying characteristics of the design two prototypes of the BMW P.3302 turbojet engines, forerunner of the BMW 003 turbojet engine, were installed.  The Jumo 210 piston engine was retained for safety, which proved wise – so often reported in literature – as both turbojet engines failed during the first flight and the pilot had to land using the nose-mounted engine alone. Original test-flight protocols published some years ago show reasonable doubt on that report.
In total the Messerschmitt Me 262 V1 successfully completed 74 flights but only one under turbojet power. The prototypes V2 through V4 were purely turbojet driven, but with the more powerful Junkers Jumo 004 turbojet engines.
The V1 through V4 prototype airframes all possessed what would become an uncharacteristic feature for most later jet aircraft designs, a fully retracting conventional landing gear setup with a retracting tailwheel. Indeed, the very first prospective German “turbojet fighter” airframe design ever flown, the Heinkel He 280, powered by a Heinkel HeS 8A turbojet engine, used a retractable tricycle landing gear from its beginnings, and flying on turbojet power alone as early as the end of March 1941. From prototype Me 262 V6 onwards all aircraft featured a fully-retractable, hydraulically-operated tricycle undercarriage. Dubbed unofficially the “Schwalbe” (“Swallow”), the first production sub-type off the new warplane, the Messerschmitt Me 262A-1a single-seat interceptor fighter entered service with the “Erprobungskommando (EKdo) 262” at Lechfeld in July 1944  (Ref.: 7, 24).