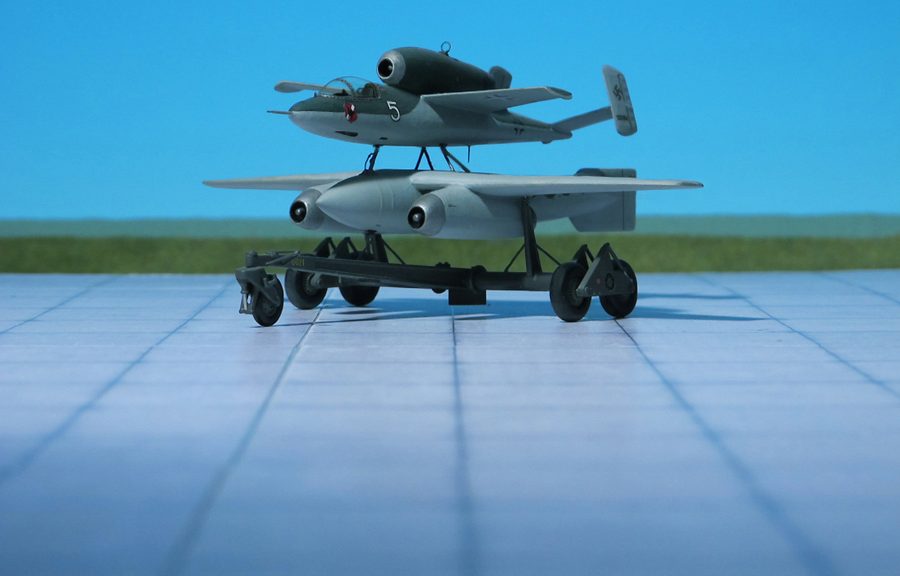 ACCOMMODATION: None. Pilot only in Heinkel He 162 A-1

COMMENT: This “Mistel 5” project was designed as a simple glide bomb that would be powered by two turbojet engines (version B) and carried in pick-a-pack combination beneath a Heinkel He 162 “Spatz” interceptor.  Since the single turbojet engine of the He 162 would not have been powerful enough to carry the heavy “Mistel 5” composition two BMW turbojet engines were mounted under the wings of the Arado Ar E. 377. This version was known as Arado Ar E.377B and was similar in all other aspects to the unpowered glide bomb Arado Ar E.377A.
Take-off of the “Mistel 5” composition was accomplished by means of a releasable trolley, sometimes additionally boosted by two Walter HWK 109-500 take-off rockets. The trolley was similar to the one that Rheinmetall-Borsig had designed for the Arado Ar 234A “Blitz” bomber and reconnaissance versions. Since the “Mistel 5” composition was heavier an extra set of wheels were added to the new trolley. Once the composition reached take-off speed the trolley was released and slowed-down by means of one to five parachutes.
A piloted version was also planned as suicide weapon but not realized. The Arado Ar E.377, neither version A nor version B, ever reached prototype status (Ref.: 17). 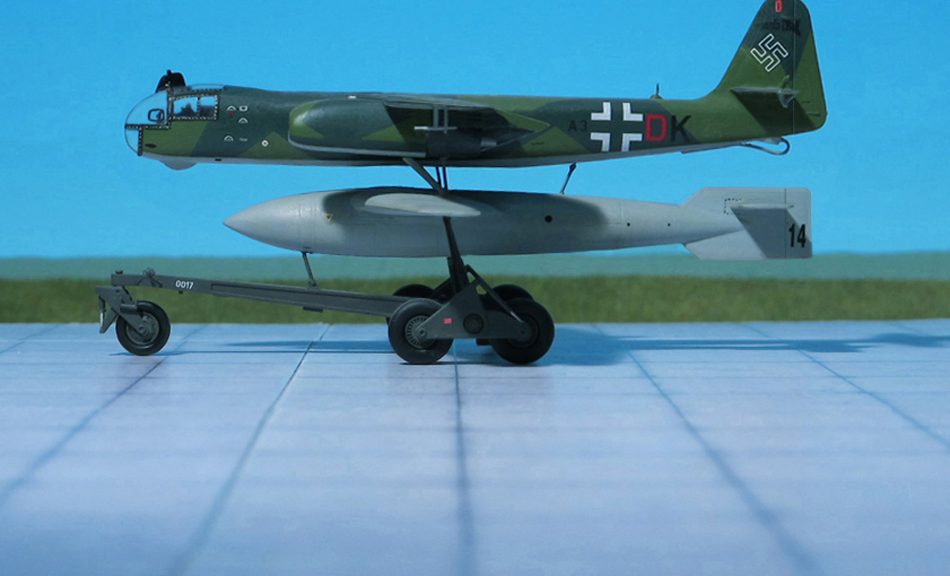 COMMENT: This “Mistel 5” project was one of the last glide bomb developments submitted to the RLM before the end of WW II. Arado, working with Rheinmetall-Borsig, designed a simple glide bomb that would be powered (version B) or unpowered (version A) and carried beneath the Arado 234 “Blitz” bomber or Heinkel He 162 “Spatz” interceptor. The purpose of this glide bomb, which could be guided by radio control or a target guidance system, was to attack targets such as ships or military facilities.
construction of the Arado Ar E.377 was wooden throughout the entire aircraft. The fuselage was circular in cross section and was cigar shaped. The nose held 2,000 kg of high explosive especially suitable for ship attacks. In addition 500 kg of an incendiary liquid was stored in the rear fuselage which also acted as ballast to counterbalance the forward warhead. The wings were tapered and shoulder mounted. They also served as auxiliary fuel tanks for the guide aircraft. A cruciform tail unit was mounted at the rear of the fuselage. For take-off the “Mistel 5” composition was set on a releasable trolley, developed by Rheinmetal-Borsig.
Upon arrival of the target the E.377 glide bomb was released by means of explosive bolts and flew to the target by means of a radio-control (Ref.:17). 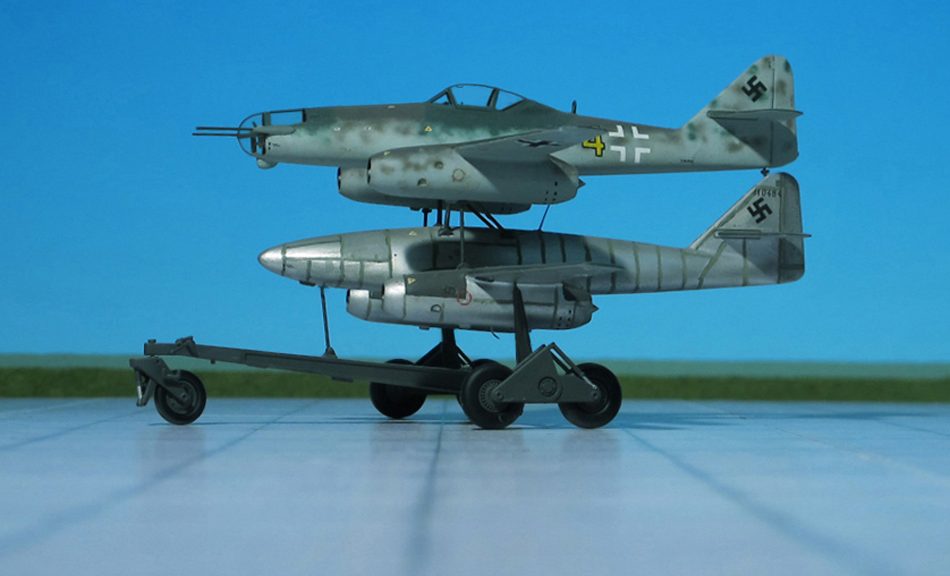 ACCOMMODATION: Crew of two in Messerschmitt Me 262A-2a/U-2 only

COMMENT: In the last stage of WW II in Europe the RLM made great effort to deploy a great variety of composite aircraft (“Misteln”, “Mistletoes”) against enemy ground installations, troop concentrations, harbor facilities, bridges, ships, etc. and even bomber formations. In most cases elder or not for service qualified aircraft were used as un-manned,  lower bomber compartment but also reconstruction of existing aircraft or complete new constructions – most made of non-strategical materials like wood etc. – were proposed. The bomber compartment was filled with explosives and guided to the vicinity of its target by a single seat fighter temporarily attached to a superstructure above the fuselage.
One of the extraordinary proposals was the combination of a Messerschmitt Me 262A-1a or Me 262A-2a/U2 as guide aircraft to an un-manned Messerschmitt Me 262A-1 as guided bomb. The cockpit canopy was faired over and all equipment stripped down to only those needed to keep the bomb flying. Nose of the aircraft was filled with explosive as well as two additional tanks setup in the fuselage. Three bomb load versions were proposed:
Model A. Armored nose of the fuselage and additional tanks filled with 4,460 kg of liquid explosive,
Model B: Armored nose formed of solid explosive, additional tanks filled with blocks of solid explosive, total amount restricted and
Model C: Armored nose formed of 2,450 kg solid explosive, additional tanks filled with 2,760 kg liquid explosive, total amount 5,210 kg.
The upper component of this “Mistel” composition – number of “Mistel” variant not clearly known – was a two-seater Messerschmitt Me 262A-2/U-2. Besides the pilot a second crew member was lying in prone position in a glazed nose section of the fuselage. He guided the bomb into the target by means of a television set “Tonne-Seedorf”. In the cone of the lower (bomb) compartment a television camera (“Tonne”) was installed and the radio operator had a television tube (“Seedorf”) with relative high resolution. By means of radio-control the missile was guided to the target.
The project was soon rejected. It became clear that a pilot of a Messerschmitt Me 262 had enough problems with his own machine and to handle two of these excentric aircraft together seemed to be impossible. 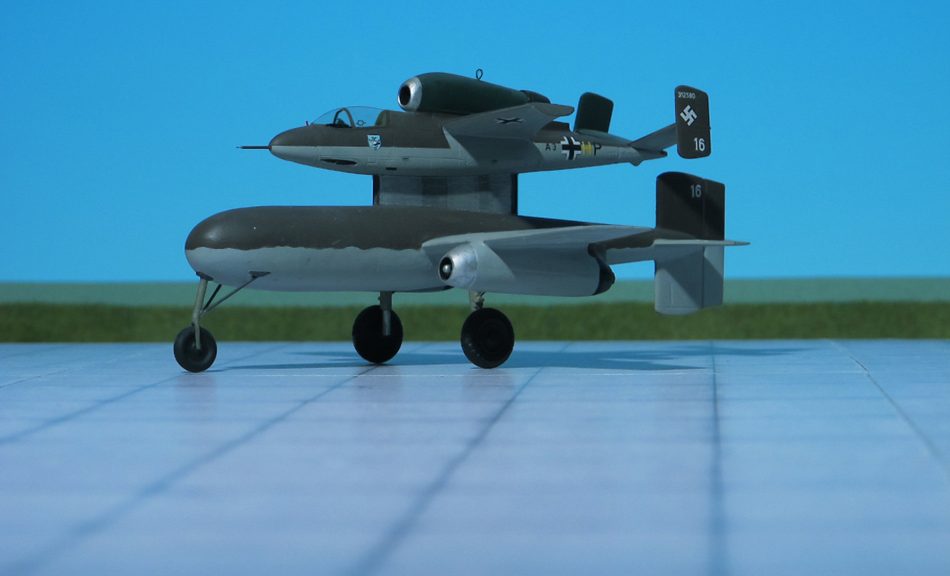 ACCOMMODATION: Pilot only in the Heinkel He 162

COMMENT: The Junkers Ju 268 was the un-manned bomber component of the “Mistel 5” parasite bomber project designed in Germany during 1944. It was a composite bomber comprising a Heinkel He 162A-2 piloted component and a specially developed Arado Ar E.377 glide bomb. Due to shortages at the Arado design offices, several other composites were studied as replacements for the Arado Ar E.377, and in late 1944 Junkers proposed the Ju268 as an alternate bomber component for the “Mistel 5”, with a Messerschmitt Me 262 studied as an alternative piloted component. The Ju 268 was simply designed with a cylindrical wooden fuselage, a hollow-charge of up to 10 tons of explosive in the nose part, rectangular mid-mounted wings, and a cruciform un-swept tail unit. A jettisonable tricycle landing gear was fixed attached to the fuselage during take-off only and power was provided by two BMW 003 or Junkers Jumo 004 turbojet engines. For suicide- or “Kamikaze”-missions a manned version of the Ju 268 was under study with a glazed cockpit section in the front of the aircraft. No further details are known and the project never left the drawing-board (Ref.: 20, 24). 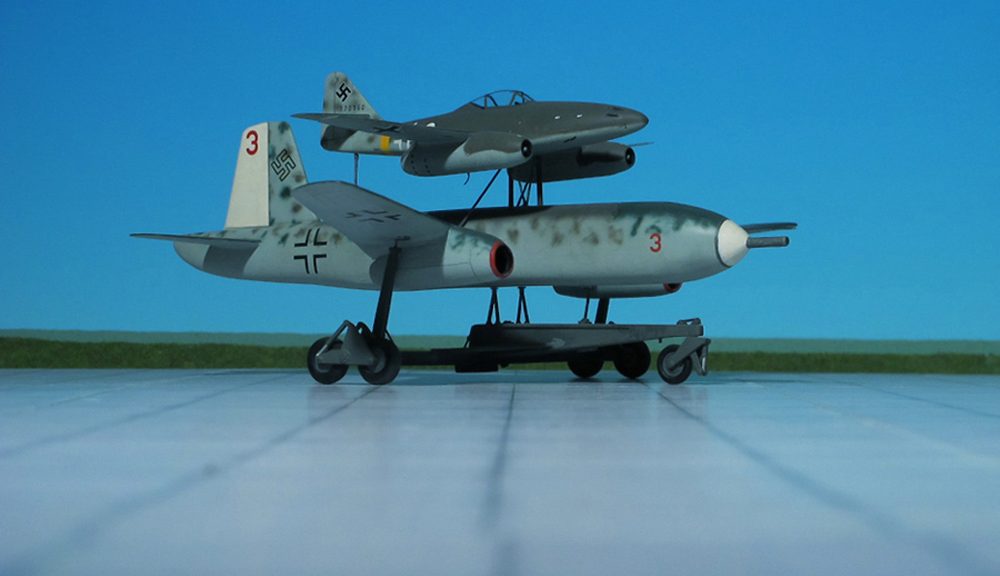 ACCOMMODATION: Pilot only in Me 262

COMMENT: In desperate attempts to stop the forward rushing Allied troops several proposals were offered using different pilotless aircraft as guided missile in pickapack combination with a piloted leading aircraft (‘Mistel’, ‘Mistletoe’). They should be used against ships, fortifications, and troop concentrations. The unmanned aircraft with a large hollow-charge warhead was guided to vicinity of its target by a single-seat fighter temporarily attached to a superstructure above the fuselage. When the objective was reached, the pilot of the upper component set the controls to approach the target in a shallow glide, and at the appropriate distance detached his aircraft and climbed away, the pilotless lower component continuing on its set course.
In March 1945 a proposal was submitted using a variant of the brand new Junkers Ju 287 as guided missile in combination with the Messerschmitt Me 262. This Ju 287 was somewhat smaller than the original aircraft, had the same wing and tail arrangement, and was to be powered by two or four turbojet engines of various types. For take-off a special trolley was developed by Rheinmetall-Borsig. There is no evidence whether this project ever was seriously discussed with the authorities (Ref.: 16). 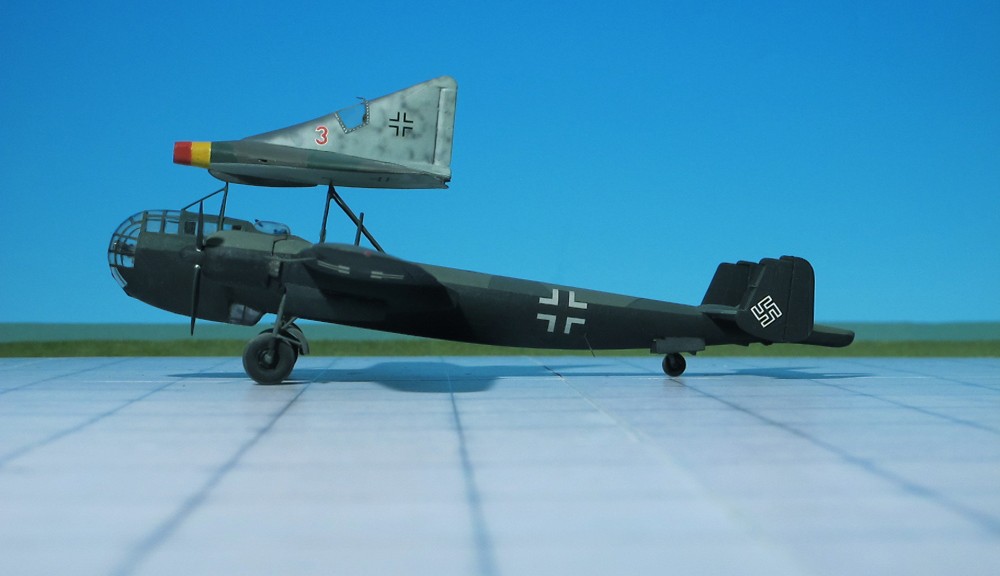 COMMENT: The Lippisch P.13a was an experimental ramjet-powered delta wing interceptor aircraft designed in late 1944. The aircraft never made it past the drawing board, but testing of wind-tunnel models in the DVL (Deutsche Versuchsanstalt für Luftfahrt) thigh-speed wind tunnel showed that the design had extraordinary stability into the Mach 2.6 range. As conventional fuels were in extremely short supply by late 1944, Lippisch proposed that the P.13a be powered by coal. Initially, it was proposed that a wire-mesh basket holding coal be mounted behind a nose air intake, protruding slightly into the airflow and ignited by a gas burner. Following wind-tunnel testing of the ramjet and the coal basket, modifications were incorporated to provide more efficient combustion. The coal was to take the form of small granules instead of irregular lumps, to produce a controlled and even burn, and the basket was altered to a mesh drum revolving on a vertical axis at 60 rpm. A jet of flame from tanks of bottled gas would fire into the basket once the P.13a had reached operating speed (above 200 mph). The aircraft started on a trolley by using solid-fuel rockets or by towplane. For tests it could be launched by a carrier aircraft. In order to test this unorthodox design a test glider DM-1 was built by students from technical faculty of Darmstadt and Munich (DM 1 = Darmstadt-München 1). Furthermore, Film footage exists which shows a gliding test of a scaled-down model of the Lippisch P.13a. These tests began in May 1944 at Spitzerberg, near Vienna, before Nazi Germany collapsed (Ref.: 23). 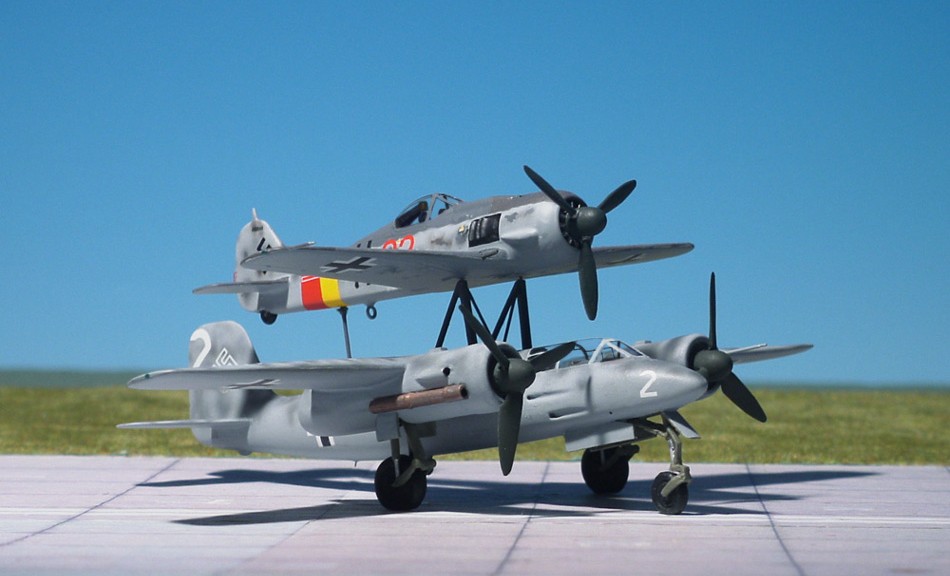 TYPE: Bomber Formation Destroyer (” Pulkzerstörer”) as as pickaback (“Mistel”) combination of a Ta 154 and a Fw 190

ACCOMMODATION: Pilot only in the Fw 190

COMMENT: Six  Ta 154 pre-production aircraft should be adapted for the “Huckepack” composite role. The Ta 154 had an explosive charge in the forward fuselage and was piloted by a Focke Wulf Fw 190 . It was proposed that the Mistel combination – reportedly designated “Mistel 7” (“Mistletoe 7”) – should be aimed at the bomber formation, the pilot detached his aircraft from the superstructure and then detonated the charge by radio signal. None combination was realized. 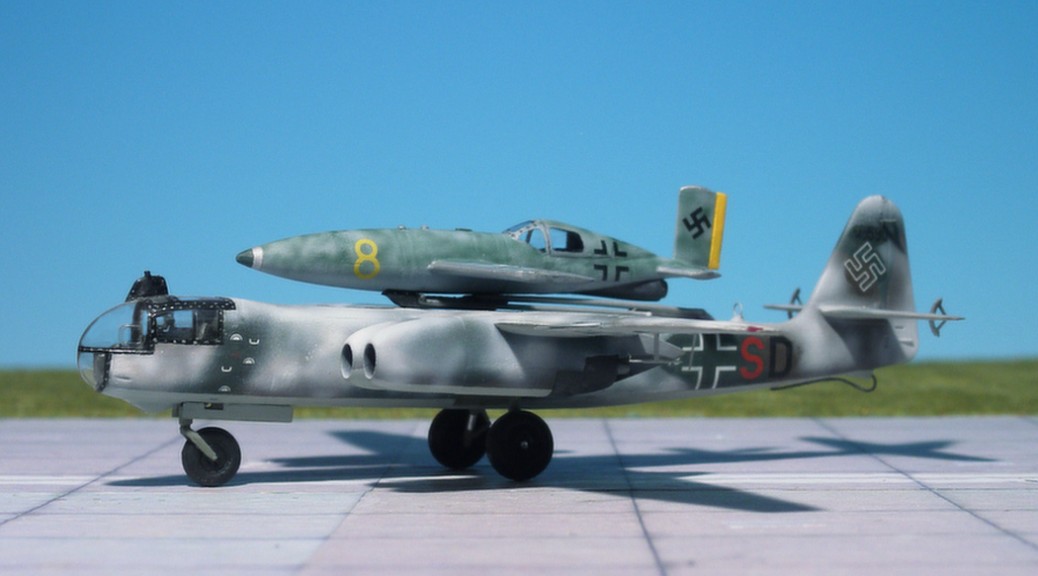 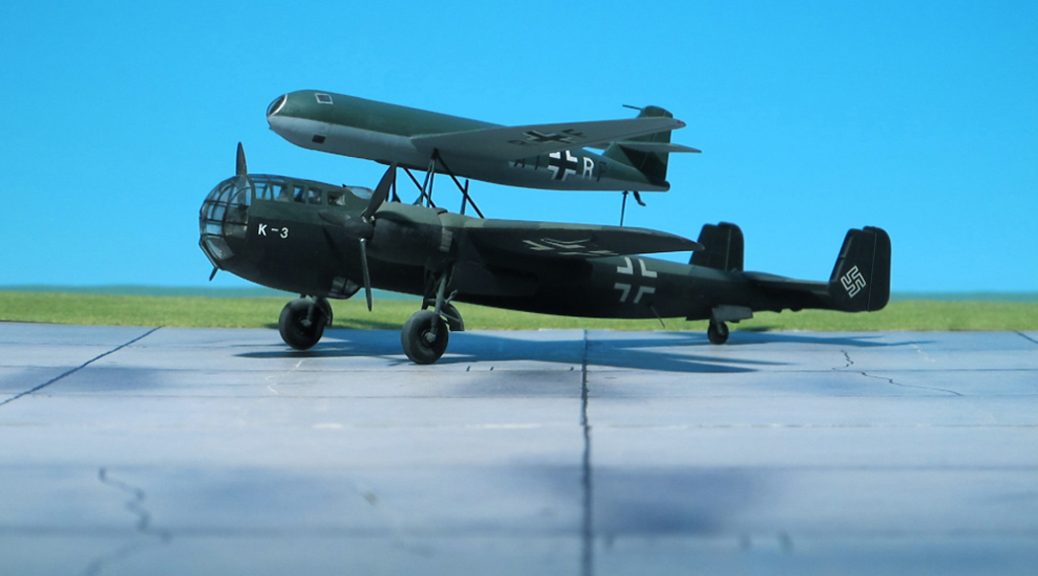