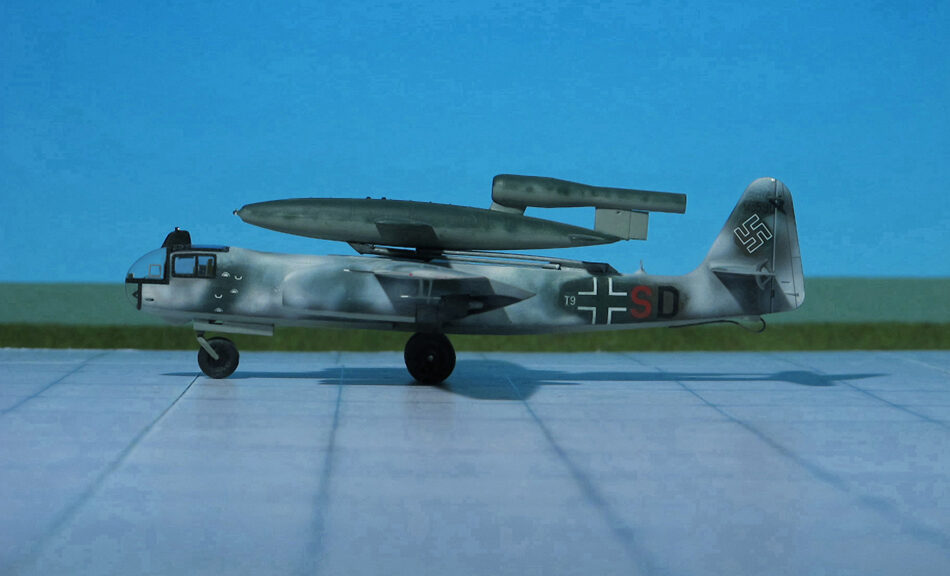 TYPE: Turbojet driven bomber, Mistel (Mistletoe) component
ACCOMMODATION: Pilot only
POWER PLANT: Four BMW 003A-2 turbojet engines, rated at 800 kp thrust each
PERFORMANCE: 460 mph at 20,000 ft
COMMENT: The Arado Ar 234 Blitz (Lightning) was the world’s first operational turbojet-powered bomber, built by the German Arado company during World War II.
Produced in limited numbers it was used almost entirely for aerial reconnaissance. In its few uses as a bomber it proved to be nearly impossible to intercept. It was the last German Luftwaffe aircraft to fly over the UK during the war, in April 1945
The Ar 234 was built in various versions: Ar 234A with two turbojet engines, Ar 234B with two turbojet engines or for engines in separat nacelles and Ar 234C with four engines mounted in a  pair of twin-engine nacelles and a purely rocket-engine-driven Ar 234R. Of each of these various versions sub-types were built or planned.
The Arado Ar 234C was equipped with four lighter weight BMW 003A turbojet engines mounted in a pair of twin-engine nacelles based on basis of the eighth prototype. The primary reason for changing the engienes was to free up the Junkers Jumo 004 turbojets for use by the Messerschmitt Me 262, but the change improved overall thrust to nearly 3.2 tonnes with all four BMW turbojets at full take-off power, especially useful for take-off and climb-to-altitude performance. An improved cockpit design, with a slightly bulged outline for the upper contour integrating a swept-back fairing for the periscope, used a simplified window design with fewer glazed panels for ease of production. The four BMW jet engines gave about 20% greater airspeed than the Ar 234B series airframes, and the faster climb to altitude meant more efficient flight and increased range.
Although an operational test squadron was being prepared, only 14 C-series airframes had been completed by the end of the war, of which fewer than half had engines. Some were found at the end of the war sitting in the open, complete but for empty engine nacelles.Comprehensive flight testing of the new sub-type had yet to begin when Germany surrendered. Three basic variants of the C-series were planned for initial construction, with several more laid out as detailed proposals. Some of these would have had a pair of the higher thrust, but heavier Heinkel/Hirth HeS 011turbojet engines, while others were intended to feature swept or “crescent”-type wings.
There were plans, not put into practice, to use the Arado 234C turbojet bomber to launch V-1s either by towing them aloft or by launching them from a “piggy back” position (in the manner of the Mistel (Mistletoe), but in reverse) atop the aircraft. In the latter configuration, a pilot-controlled, hydraulically operated dorsal trapeze mechanism would elevate the missile on the trapeze’s launch cradle about 2.4 m clear of the Ar 234’s upper fuselage. This was necessary to avoid damaging the mother craft’s fuselage and tail surfaces when the pulsejet ignited, as well as to ensure a “clean” airflow for the Argus motor’s intake.

TYPE: Unmanned Flying bomb
ACCOMMODATION: None
POWER PLANT: One Argus As 109-014 pulsejet, rated at 330 kp thrust
PERFORMANCE: 400 mph at 3000 ft
COMMENT: The V-1 flying bomb (Vergeltungswaffe 1,Vengeance Weapon 1) was an early cruise missle and the only production aircraft to use a pulsejet for power. Its official RLM (Reichsluftwsffenministerium, Reich Aviation ministry) designation was Fi 103 was also known to the Allies as the buzz bomb or doodlebug and in Germany as Kirschkern (cherry stone) or Maikäfer (maybug).The V-1 was deployed for the terror bombing of London. It was developed at Peenemünde Army Research Center in 1939 by the German Luftwaffe at the beginning of the WW II. Because of its limited range, the thousands of V-1 missiles launched into England were fired from launch favilities along the French and Dutch coasts.
The V-1 was designed with a fuselage constructed mainly of welded sheet steel and wings built of plywood. The simple Schmidt/Argus-built pulsejet engine pulsed 50 times per second, and the characteristic buzzing sound gave rise to the colloquial names buzz bomb” or doodlebug.
The Argus pulsejet‘s major components included the nacelle, fuel jets, flap valve grid, mixing chamber Venturi, tail pipe and spark plug. Compressed air forced gasoline from the 640 l fuel tank through the fuel jets, consisting of three banks of atomizers with three nozzles each. Argus’ pressurized fuel system negated the need for a fuel pump.  These nine atomizing nozzles were in front of the air inlet valve system where it mixed with air before entering the chamber. A throttle valve, connected to altitude and ram pressure instruments, controlled fuel flow. Schmidt’s spring-controlled flap valve system provided an efficient straight path for incoming air. The flaps momentarily closed after each explosion, the resultant gas compressed in the Venturi chamber, and its tapered portion accelerated the exhaust gases creating thrust. The operation proceeded at a rate of 42 cycles per second. The engine made its first flight aboard a Gotha Go 145 biplane on 30 April 1941.
The V-1 guidance system used a simple autopilot developed to regulate altitude and airspeed. A pair of gyroscopes controlled yaw and pitch, while azimuth was maintained by a magnetic compass. Altitude was maintained by a barometric device.Two spherical tanks contained compressed air  that drove the gyros, operated the pneumatic servo-motors controlling the rudder and elevator, and pressurized the fuel system. The warhead consisted of 850 kg of Amatol, 52A+ high-grade blast-effective explosive with three fuses. An electrical fuse could be triggered by nose or belly impact. Another fuse was a slow-acting mechanical fuse allowing deeper penetration into the ground, regardless of the altitude. The third fuse was a delayed action fuse, set to go off two hours after launch.
Almost 30,000 V-1s were built; by March 1944, they were each produced in 350 hours (including 120 for the autopilot), at a cost of just 4% of a V-2, which delivered a comparable payload. Approximately 10,000 were fired at England; 2,419 reached London (Ref.: 7, 24).