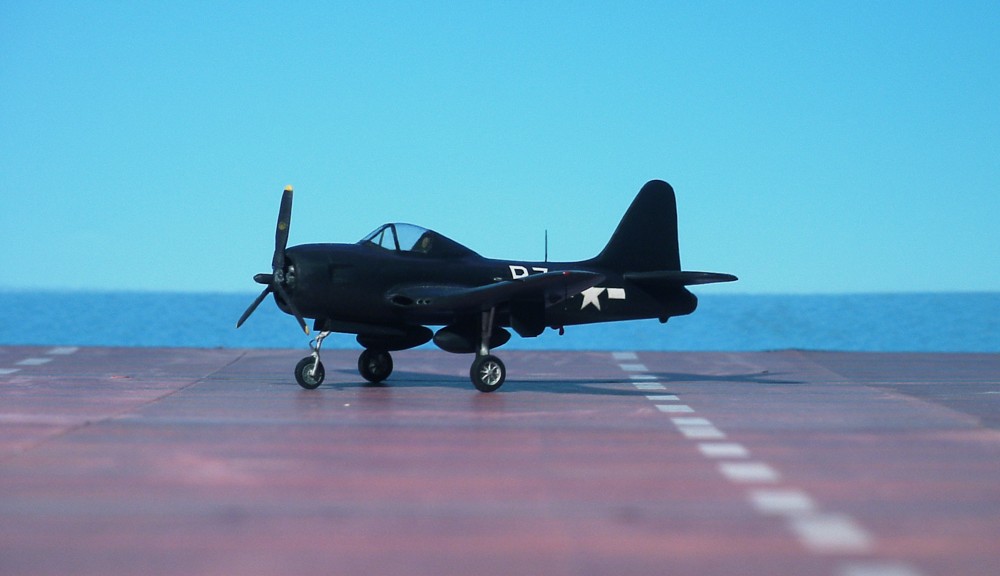 COMMENT: The Ryan FR- Fireball was a mixed-power fighter aircraft designed by Ryan Aeronautical for the US Navy during WW II. It was the Navy’s first aircraft with a turbojet engine. Only 66 aircraft were built before Japan surrendered in August 1945. The FR-1 Fireball equipped a single squadron before the war’s end, but did not see combat. The aircraft ultimately proved to lack the structural strength required for operations aboard aircraft carriers and was withdrawn in mid-1947.
Design of the FR-1 began in 1943 for a mixed-powered fighter because early turbojet engines had sluggish acceleration that was considered unsafe and unsuitable for carrier operations. Ryan received a contract for three XFR-1 prototypes and one static test airframe on February 1943 with the first two prototypes delivered in 14 months. Another contract was placed for 100 aircraft on December 1943 and a later contract on January 1945 increased the total of FR-1s on order to 700.
The XFR-1 was a single-seat, low-wing monoplane with tricycle landing gear. A 1,350 hp Wright R-1820-72W Cyclone radial engine was mounted in the fighter’s nose while a 724 kp thrust delivering General Electric I-16 (later redesignated as the J-31) turbojet was mounted in the rear fuselage. It was fed by ducts in each wing root which meant that the wing had to be relatively thick to house the ducts and the outward-retracting main landing gear. To simplify the fuel system, both engines used the same grade of avgas. Two self-sealing fuel tanks were housed in the fuselage. The cockpit was positioned just forward of the leading edge of the wing and the pilot was provided with a bubble canopy which gave him excellent visibility. The XFR-1 had the first laminar flow airfoil in a navy carrier aircraft.
The Fireball was armed with four 12.7 mm M2 Browning machine guns. They were mounted in the center section of the wing, immediately outboard of the air intakes for the jet engine. Four 127 mm rockets could be carried under each outer wing panel and two hardpoints were provided under the center section for 454 kg bombs or drop tanks.  Armor plates were provided in front and behind the pilot’s seat and for the oil cooler
The first XFR-1 made its first flight on June 1944 without ist turbojet engine, but this was installed shortly afterward. The second prototype first flew on September 1944. Test flights confirmed wind tunnel tests that revealed a lack of longitudinal stability because the center of gravity had been miscalculated. In addition, the circular rear fuselage of the FR-1 gave less stability than the slab-style fuselage of the Grumman F4F Wildcat that was used as a model for the stability calculations. A new tail with enlarged vertical andhorizontal stabilizers was designed and retrofitted to the prototypes.
The first prototype was lost in a crash on October 1944. Investigation showed that the wing structure was not strong enough to resist compressibility effects. This was cured by doubling the number of rivets in the outer wing panels. The second prototype crashed on March 1945 when the pilot failed to recover from a dive from 35,000 feet, probably also due to compressibility effects. The third prototype crashed on  April when the canopy blew off during a high-speed pass.
Operational testing by the Naval Air Test Center (NATC) at Naval Air Station Patuxent River that included carrier acceptability tests revealed additional problems: The piston engine tended to overheat until electrically operated cowl flaps were installed, the catapult hooks had to be moved, and the nosewheel oleo shock strut had to be lengthened. Carrier suitability tests began aboard the escort carrier CVE 30 Charger in early January 1945. The aircraft successfully made five catapult take-offs using the piston engine as well as three take-offs using both engines. No problems were reported when landing aboard the carrier.
On December 1943, orders for 100 production FR-1s were placed, with a follow-up order of 1,000 additional fighters in January 1945. All of the contracts were contingent on the aircraft successfully completing carrier trials. Only 66 Ryan FR-1 Fireballs were completed by November 1945 as orders for 1,044 FR-1s were canceled on VJ Day.
One squadron, VF-66, received its first Fireballs in March 1945, but they never saw combat. On 1 May, three of the squadron’s aircraft were craned aboard the carrier CV-4 Ranger to attempt to qualify seven pilots, but two of the fighters were damaged while landing. One missed the arresting gear and hit the crash barrier while the other aircraft’s nose gear collapsed. The following month the pilots qualified and were on pre-embarcation leave when the Japanese surrendered. The squadron was decommissioned on 18 October 1945 with all pilots and aircraft transferred to VF-41. On 6 November 1945, a Fireball of VF-41 became the first aircraft to land under jet power on an aircraft carrier, albeit without prior planning. After the radial engine of an FR-1 failed on final approach to the escort carrier CVE-65 Wake Island, the pilot managed to start the jet engine and land, barely catching the last arrestor wire before hitting the ship’s crash barrier (Ref.: 24).