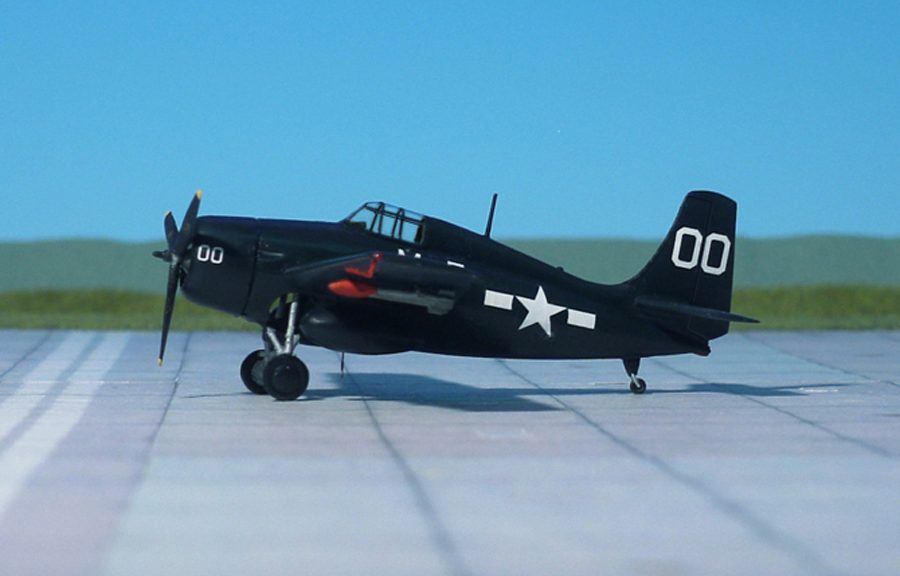 COMMENT: Grumman’s F4F “Wildcat” production ceased in early 1943 to make way for the newer F6F “Hellcat”, but General Motors/Eastern Aircraft continued producing “Wildcats” for both U.S. Navy and (British) Fleet Air Arm use. At first, General Motors produced the FM-1 (identical to the F4F-4, but with four guns). Production later switched to the improved FM-2 (based on Grumman’s XF4F-8 prototype, informally known as the “Wilder Wildcat”) optimized for small-carrier operations, with a more powerful engine, and a taller tail to cope with the increased torque.
From 1943 onward, “Wildcats” equipped with bomb racks were primarily assigned to escort carriers for use against submarines and attacking ground targets, though they would also continue to score kills against Japanese fighters, bombers and kamikaze aircraft. Larger fighters such as the “Hellcat” and the Vought F4U “Corsair” and dedicated dive bombers were needed aboard fleet carriers, and the “Wildcat’s” slower landing speed and its size made it more suitable for shorter flight decks of escort carriers.
General Motors / Eastern Aircraft produced 5,280 FM-1 and FM-2 variants out of total production of 7,860 “Wildcats” (Ref.: 24).