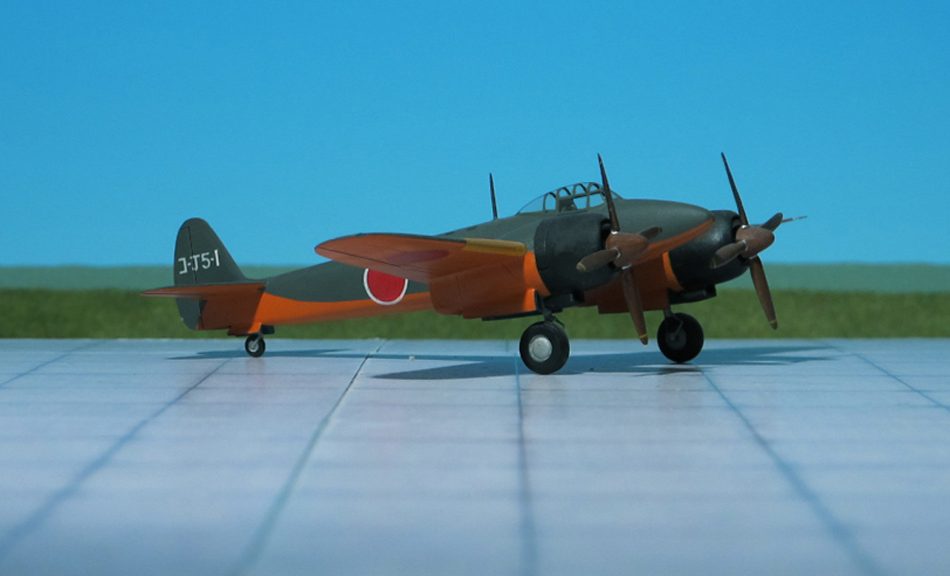 COMMENT: The Nakajima J5N was a Japanese fighter aircraft of WW II. The J5N was developed as twin-engine interceptor for countering attacks by Boeing B-29 “Superfortress” bombers.
During the spring of 1943, the Imperial Japanese Navy Air Force (IJNAF) issued an 18-Shi specification for a single-seat twin-engine interceptor capable of reaching a top speed of 414 mph at 19,690 ft. Nakajima submitted a proposal based on the earlier Nakajima N1N1 “Gekko” three-seat night fighter, although this new aircraft – designated Nakajima J5N1 – was slightly smaller. The layout of the J5N was similar to the J1N: a low set wing on which were mounted the two power plants, 1,990 hp Nakajima “Homare 21” air-cooled radial engines, with a long fuselage ending in a conventional tail arrangement. For maximum utilization of the power from the twin engines, large four-blade propellers were fitted which also featured large spinners (as fitted to the J1N). The main wheels retracted rearwards into the engine nacelles, and the tailwheel was fixed. The cockpit was set above the wing, and featured a starboard-opening canopy. The nose was streamlined to offer the pilot an excellent forward view during landing, takeoff and taxiing.
Impressed with the design, the JNAF authorized the development of the J5N1, assigned the name “Tenrai” (“Heavenly Thunder”), and six prototypes were requested to be built. Progress was impeded by the failure of the engines to produce their promised power, and by a steady increase in the weight of the airframe as the need to reverse the long-standing policy of giving low priority to armor protection led to a buildup of weight and a drop in performance. The first prototype – shown here  – lacking its armament – made its first flight July 13, 1944, and was something of a disappointment. The top speed attained was only 371 mph – far below the specified 414 mph of the requirement. Despite the other five prototypes also having flown with numerous enhancements, the aircraft never achieved its design speed, and the project was abandoned soon after in February 1945. Four of the six experimental aircraft were lost to accidents (Ref.: 24).