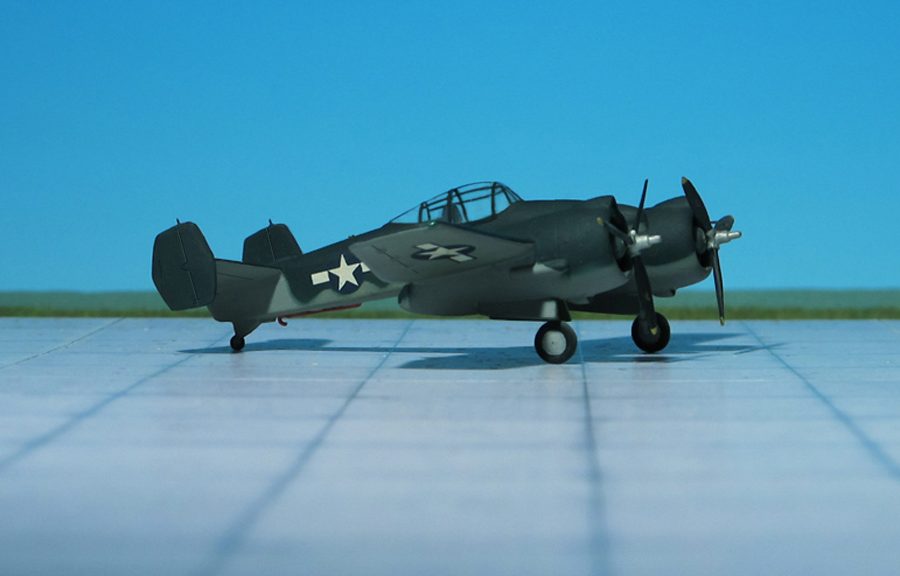 COMMENT: In 1938 Grumman presented a proposal to the U. S. Navy for a twin engine carrier based aircraft, unlike any other fighter aircraft that had ever been considered. The design was for a light weight fighter powered by two 1,200 hp Wright R-1820 engines, with propellers geared to rotate in opposite directions to cancel out the effects of each engine’s torque, promising high-speed, and an outstanding rate of climb. Designated XF5F-1 “Skyrocket” it was a low wing monoplane with a short fuselage that began aft of the wing’s leading edge with a twin tail assembly that featured a pronounced dihedral to the horizontal stabilizer. The main landing gear and tail wheel were fully retractable. The aircraft flew for the first time on 1 April 1940.  Engine cooling problems arose in the initial flights, resulting in modification to the oil cooling ducts. Further modifications were made to the prototype including reduction in the height of the cockpit canopy, redesign of the engine nacelles, and extending the fuselage forward of the wing. Flight tests indicated good flying qualities for the XF5F-1. The counter-rotating props were a nice feature, virtually eliminating the torque effect on take-off the single-engine performance was good, rudder forces tended to be high in single engine configuration. Nevertheless, additional changes were needed after further flight tests that were not completed until 15 January 1942. In the meantime, Grumman began work on a more advanced twin-engine shipboard fighter, the XF7F-1 “Tigercat”, and further testing with the XF5F-1 supported the development of the newer design. The prototype continued to be used in various tests, although plagued by various landing gear problems, until it was struck from the list of active aircraft after it made a belly landing on 11 December 1944.
A land-based development of the Grumman XF5F-1 “Skyrocket” was the Grumman XP-50 “Skyrocket”. It entered into a USAAC contest for a twin-engine heavy interceptor aircraft. A prototype was ordered on November, but the aircraft lost the competition to the Lockheed XP-49 (Ref.: 24).