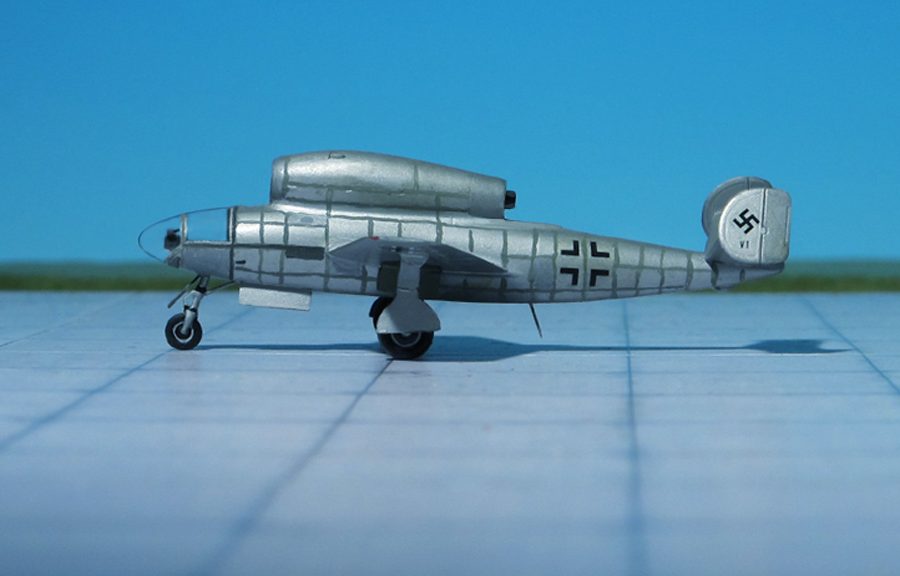 COMMENT: Early in 1943, the RLM issued a specification for a single-seat attack aircraft to combat the anticipated Allied invasion in Europe. Although the specification called for a piston-engine powered dive bomber it was soon realized that only a turbojet-driven aircraft could hope to match the proposed performance requirements. The Henschel Company submitted a design which was approved as Henschel Hs 132 and placed accent of simplicity and ease to manufacture. The wing was a wooden structure with plywood skinning, and the fuselage was a circular metal monocoque. The single turbojet was mounted above the fuselage, exhausting over the rear fuselage and between the twin vertical surfaces of the tail assembly. A tricycle landing gear was to be used and the extensively glazed cockpit was completely faired with the fuselage. The pilot was in prone position better to withstand the high G-forces of the fast and steep dive during the bomb run. It was estimated that during the dive a speed of more than 570 mph could be reached and after the bomb was released the aircraft was pulled up thus inducing acceleration forces of up to 10 G. A contract for six prototypes was placed in May 1944, and construction began in March 1945. When the war in Europe ended the Henschel Hs 132 V1 was nearly complete and captured by Soviet forces

NOTICE: To ascertain the practicability of the prone position for dive bomber pilots, the DLV ordered in early 1943 a small prone-pilot research aircraft that was designed and built by the FFG Berlin (Flugtechnische Fachgruppe/Aerotechnical Group, University Berlin) and designated Berlin B9. The design was a low winged, twin-engine aircraft of standard layout. It was built of mixed construction and could accept up to 22 G. It was flown by many experienced pilots and showed the advantages of a prone position for pilots to tolerate high g-forces.  (Ref.: 17).