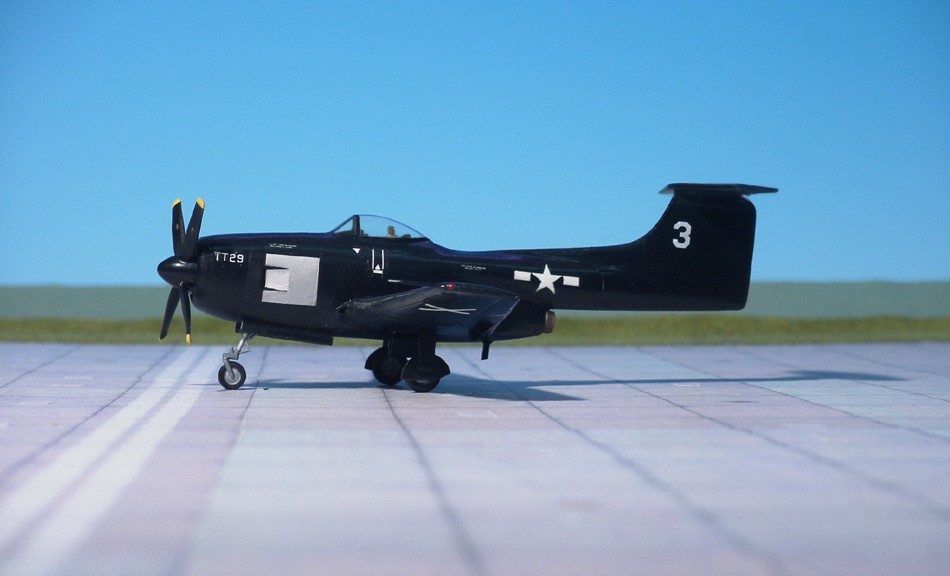 COMMENT: The Curtiss XF15C-1 is a mixed-propulsion fighter prototype of the 1940s. It was among a number of similar designs ordered by the US Navy before pure turbojet powered aircraft had demonstrated their ability to operate from carriers and the mixed-propulsion designs were abandoned. Only three prototypes were constructed, one of which survived to this day.
By the late 1940s, the US Navy was interested in the mixed-power concept for its shipborne fighters. Turbojet engines of that era had very slow throttle response, which presented a safety concern in the case of a missed approach on an aircraft carrier as the aircraft might not be able to throttle up quickly enough to keep flying after leaving the end of the flight deck. This led to orders for a number of mixed-propulsion fighters, including the Ryan FR-1 Fireball.
As such, an order was placed with Curtiss on  April 1944 for delivery of three mixed-power aircraft, designated the F15C. Powered by both a 2,100 hp Pratt 6 Whitney R-2800-34W Double Wasp propeller engine, and an Allis-Chalmers J 36 centrifugal flow turbojet, the aircraft was in theory the fastest fighter in the US Navy at that time.
The first flight of the first prototype was on 27 February 1945, without the turbojet installed. When this was completed in April of the same year, the aircraft flew several mixed-power trials, however on  May, it crashed on a landing approach. The second prototype flew for the first time on  July, again in 1945, and was soon followed by a third prototype. Both aircraft showed promise, however, by October 1946, the Navy had lost interest in the mixed-power concept and cancelled further development (Ref.: 24).