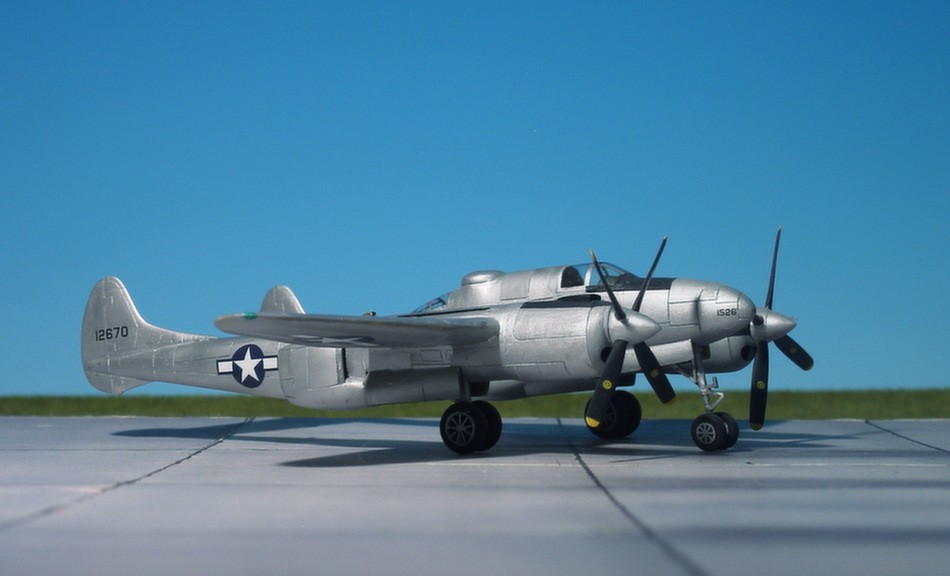 COMMENT: The Lockheed XP-58 Chain Lightning was an American long-range fighter developed during WW II. Although derived from the successful Lockheed P-38 Lightning,  the XP-58 was plagued by technical problems with its various engines that eventually led to the cancellation of the project. Initially, the design was powered by two Continental IV-1430 engines. In July 1940, Lockheed decided to switch to Pratt & Whitney XH-2600 engines as the aircraft would be underpowered with the Continental engine. However, soon Lockheed was advised the development of the XH-2600 engine was terminated. So again engine alternatives were needed and the design was changed to use two Wright R-2169 Tornado engines. In February 1943, use of another engine, the Allison V-3420, was necessary due to poor progress with the Tornado engine development. Parallel to this the design was revised as a second crew member was added and the defensive armament was changed. Two turrets, one upper and the other lower on the fuselage, each  containing two .50 in machine guns, were installed and directed by a gunner in the rear fuselage. The XP-58 finally flew on 6 June 1944 for the first time, but after 25 test flights were completed and clarified many more problems further work on the XP-58 was reduced and in October 1944 the program was stopped and no further flights were done. The construction of the second prototype was abandoned. (Ref.: 23)