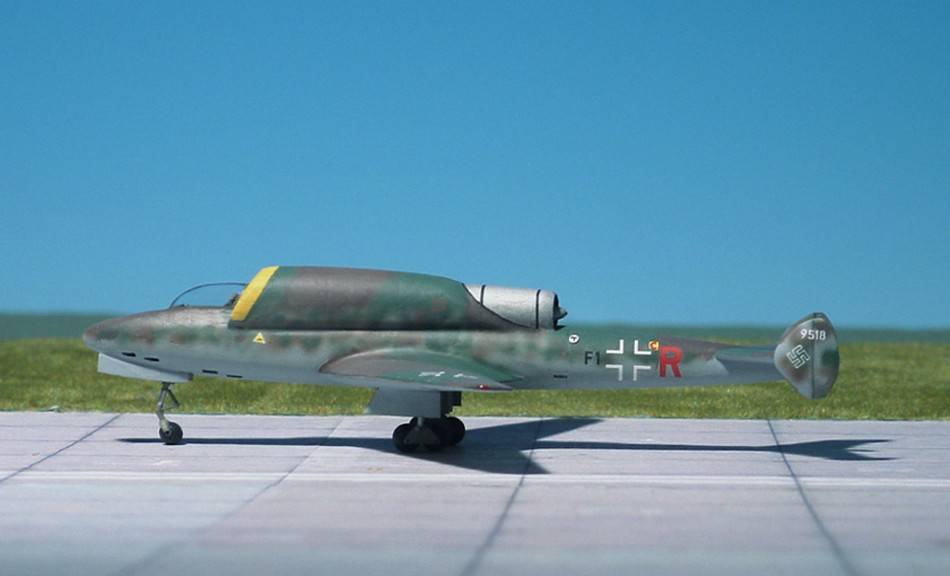 COMMENT: In mid 1943, the Arado Aircraft Company draw up some studies into the future development of high speed fighters. Among the designs was an interceptor aircraft with a combination of both turbo-jet as well as rocket engine. This project, the Arado Ar TEW 16/43-15, had a single Heinkel He S 011 turbo-jet engine developing 1,300 kp of thrust, mounted atop the fuselage immediately behind the cockpit. To improve the climb rate and performance, a Walter HWK 509A bi-fuel rocket engine was also placed within the rear fuselage. The wings were swept back at 25 degrees, and because of the jet engine’s placement, a twin fin and rudder arrangement was provided. In order to achieve as much space as possible for fuel tanks a special landing gear arrangement was proposed. This was designed by the DVL (Deutsche Versuchsanstalt für Luftfahrt, German Aviation Experimental Establishment). The main wheels were provided with small spherical tires of 12.5 inch in diameter, and were placed in tandem, thus the space needed when retracted was minimal. The nose and main wheels retracted forwards. The cockpit was located in the nose of the fuselage and guaranteed good front view, but vision to the rear was very poor due to the engine and air intake position. Due to these expected problems – same as with another Arado project, the Arado E. 580,  further work on this design was cancelled. (Ref.: 16; 18)