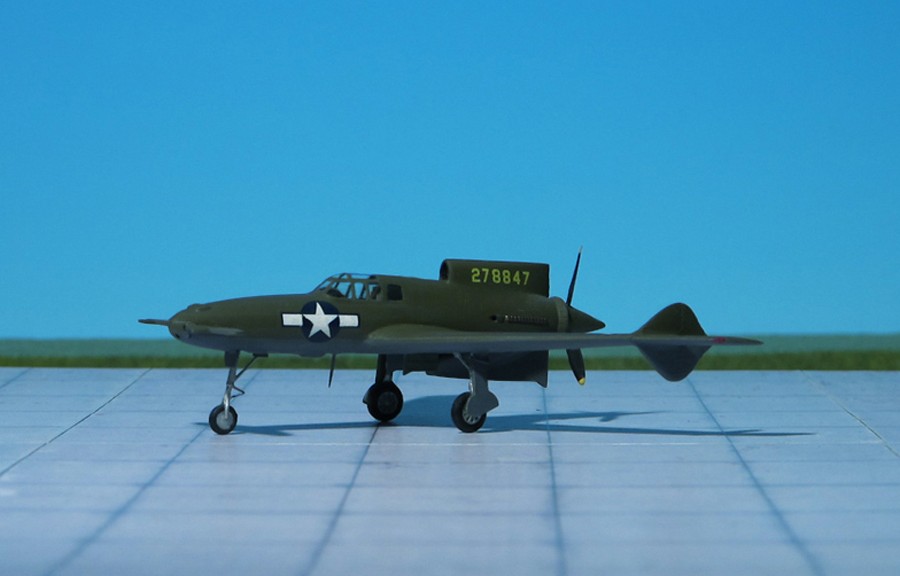 COMMENT: One of the most radical fighter designs to fly during WW II, the Curtiss XP-55 was evolved as a result of Circular Proposals R-40C which called for a fighter powered by the Pratt & Whitney X-1800-A3G engine which, by employing an conventional design, offered enhanced pilot visibility and armament installation, and a considerable reduction in overall drag by comparison with similar powered single-seaters of conventional configuration. An US Army Air Corps specification issued on November 1939 set forth performance requirements and, in addition to Curtiss-Wright, the Vultee and Northrop companies submitted design proposals, these eventually appearing as Vultee XP-54 and Northrop XP-56 and also employing unorthodox configurations. On July 1943 a contract was issued for three XP-55 fighters powered by the Allison V-1710, which engine was selected in preference to the Pratt &N Whitney X-1800 on the basis of reliability and availability. The first XP-55 was completed on July 1943, and flight testing began immediately. This aircraft was destroyed on November 1943 during stall tests. While the second prototype began flight test on January 1944 under restricted conditions, extensive modifications were incorporated in the third XP-55 that began flight test on September 1944. The results of these trials indicated that, in general, the handling characteristics of the XP-55 were satisfactory. A serious handicap was engine cooling which was critical during all phases of operation. The XP-55 attained a maximum speed of 377.5 mph at 16,900 ft. The official conclusions were that the performance did not compare favourably with standard production fighters and further development was abandoned (Ref.: 13)