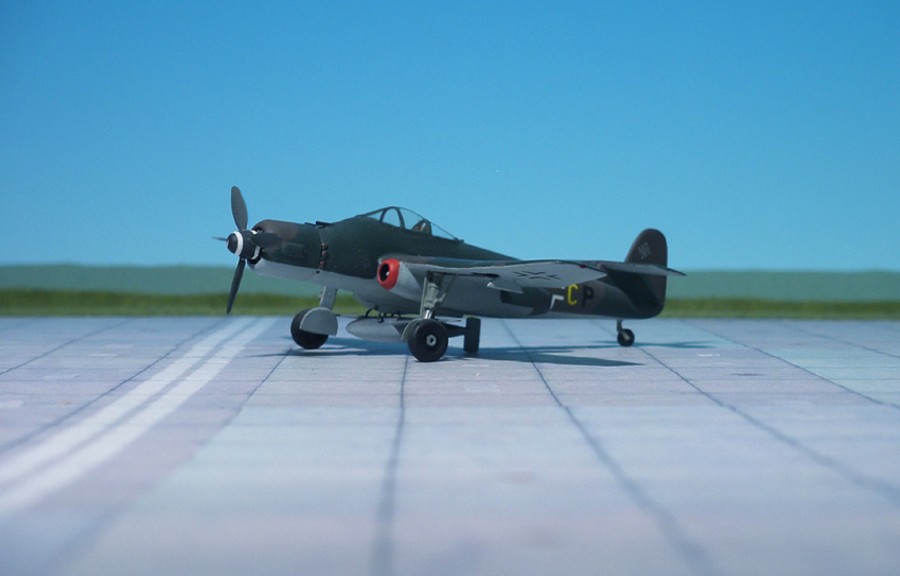 COMMENT: This asymmetric mixed-propulsion ground attack aircraft and dive bomber was designed by Dr. Richard Vogt, Chief engineer of the Blohm & Voss Aircraft Company. The wing was of an unswept, rectangular shape with taper and dihedral on the outer wing panels. The fuselage was slightly offset to the starboard side, to balance the BMW 003A or Heinkel He S 011 turbojet that was slung beneath the port wing. A BMW 801 D radial engine also provided power, this being located in the nose of the fuselage. The tail plane was located forward of the vertical tail on a stepped section of the fin. A conventional landing gear design was chosen for the BV P.204, with the tailwheel retracting backwards into the rear fuselage, while the mail wheels retracted outwards into the wing. Armament consisted of two MG 151/20 20mm cannon with 250 rounds of ammunition located ahead of the cockpit firing through the propeller and two MG 151/20 20mm cannon mounted in the wings firing outside of the propeller arc. There was a provision to mount two MK 103 30mm cannon with 70 rounds of ammunition beneath the wings also. For highly defended targets a Blohm & Voss Bv 246 “Hagelkorn” (“Hailstone”) missile, an automatic guided glide bomb, could be carried externally under the fuselage (Ref.: 16).