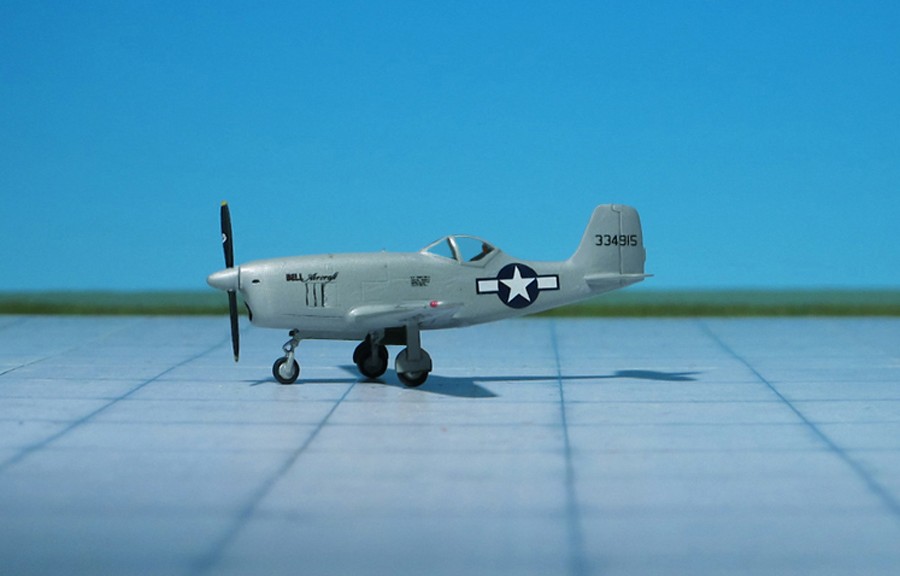 COMMENT:  The rapid expansion of aircraft production in the USA before WWII inevitably led to shortage in the supply of light alloy. Interest therefore began to be focused upon the substitution of non-critical materials such as wood. In October 1941discussion between USAAF personnel and engineers of the Bell Aircraft Corp began with the view of developing a lightweight “non-strategic” fighter, designated XP-77. The aircraft was a very small low wing monoplane using resin-bonded laminated wood construction with a stressed skin. The engine was a 520 hp Ranger V-770 air-cooled in-line unit that was intended to be developed in a supercharged version, the V-770-9. Six prototypes of the XP-77 were ordered in September 1942, plus two static test airframes, a mock-up and a full-scale model for wind-tunnel testing. But the lack of the supercharged engine, growth in the bare weight of the prototypes, reduced performance estimates, overrunning costs and increasing supplies of light alloys let to interest in the XP-77 programme waning during 1943. The contract was reduced to only two flying prototypes and the first of these was not ready for flight test until April 1944. Both prototypes were tested briefly by the USAAF but in December 1944 the entire development contract was terminated, the consensus of opinion being that the XP-77 was operationally unsuitable and that its performance showed no improvement over heavier fighters of conventional construction (Ref.: 8).