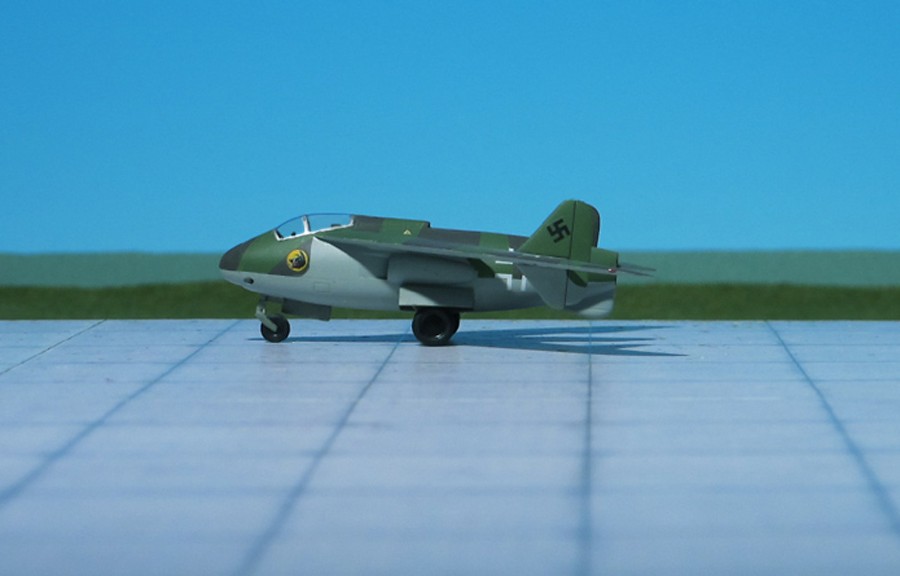 COMMENT: As part of the “Jägernotprogramm” (Fighter emergency program), at the beginning of 1945 a programme was launched by the Oberkommando der Luftwaffe, (OKL, Luftwaffe High Command) in order to replace the Heinkel He 162 “Salamander”
(“Volkskjäger”, “Peoples fighter” ). The new aircraft was intended to have superior performance in order to deal with high altitude threats such as the Boeing B-29 “Superfortress”, first missions expected in summer 1945. To meet this requirement, power was to be a single Heinkel HeS 011 turbojet. Proposals were brought forward by other German aircraft makers so as the Blohm & Voss Bv P.212, Focke-Wulf Ta 183, Heinkel He P.1078,Junkers EF 128, and Messerschmitt Me P.1110. The designs of the official winner of the competition, the Junkers EF 128, were submitted in February 1945. This more advanced fighter attracted more interest than the austere Miniaturjäger (Midget fighter) among German aircraft manufacturers, but at the time of the end of WWII only models had been built. It had swept wings of 45 degrees which included wood in their construction. The air intake for the turbojet was with boundary layer suction aerodynamically refined, the air left the fuselage behind the cockpit. A model for wind-tunnel experiments and a mock-up of the fuselage are built. Estimated flight characteristics and performance were optimistic and led to an order for mass production starting in mid1945. There was a projected variant of a two-seater all-weather and night fighter with a lengthened fuselage, pressure-cabin and FuG 240 “Berlin” radar. (Ref.: 22, 24).