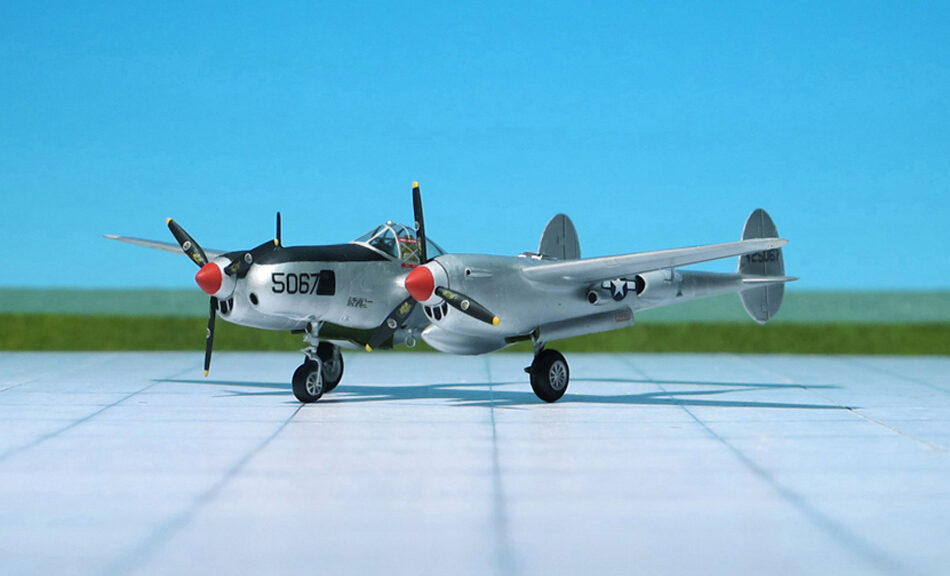 COMMENT: The Lockheed P-38 Lightning was an American single-seat, piston-engined fighter aircraft that was used during World War II. Developed for the United States Army Air Corps, the P-38 had distinctive twin booms and a central nacell containing the cockpit and armament. Along with its use as a general fighter, the P-38 was utilized in various aerial combat roles including as a highly effective fighter-bomber, a night-fighter and as a long-range escort fighter when equipped with drop tanks. The P-38 was also used as a bomber-pathfinder, guiding streams of medium and heavy bombers; or even other P-38s, equipped with bombs, to their targets. Used in the aerial reconnaissance role, the P-38 accounted for 90 percent of the aerial film captured over Europe.
The first combat-capable Lightning was the P-38E which rolled out of the factory in October 1941. Because of the versatility, redundant engines, and especially high speed and high altitude characteristics of the aircraft, as with later variants over a hundred P-38Es were completed in the factory or converted in the field to a photoreconnaissance variant, the F-4, in which the guns were replaced by four cameras. Most of these early reconnaissance Lightnings were retained stateside for training, but the F-4 was the first Lightning to be used in action in April 1942. In total 99 P-38E were converted to F-4.
After 210 P-38Es were built, they were followed, starting in February 1942, by the Lockheed P-38F. Its photo reconnaissance version was the Lockheed F-4A Lightning of which 90 aircraft were built.
The Lockheed P-38F was followed in June 1942 by the P-38G, using more powerful Allisons of 1,400 hp  each and equipped with a better radio. The reconnaissance variant was the F-5A, 181 aircraft were built.
The following 323 reconnaissance versions F-5B and F-5C were converted from Lightning version P-38J. Major differences were the introduction of uprated Allison engines as well as a new the turbosupercharger intercooler system.
The P-38L Lightning was the most numerous variant of the Lightning, with 3,923 built. It entered service with the USAAF in June 1944, in time to support the Allied invasion of France on  D-Day. The F-5E reconnaissance variants were converted from the P-38J and P-38L. In total 705 aircraft had been converted for photographic reconnaisssance duties. The aircraft shown here probably belongs tot he 7th Photographic Reconnaisance Group (PRG), 8th USAAF, stationed at Chalgrove, England (Ref.: 24).