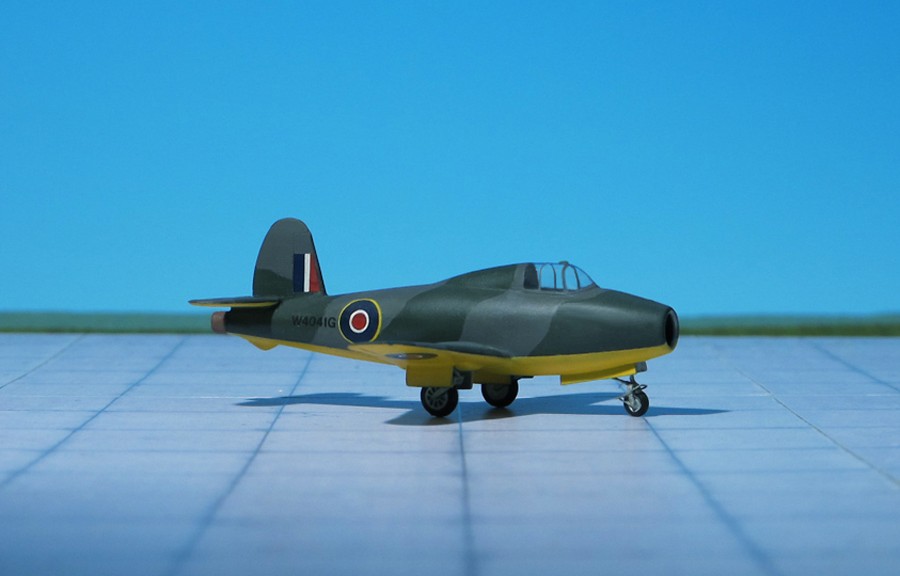 COMMENT: The Gloster E.28/39, also referred to as the ‘Gloster Whittle’, ‘Gloster Pioneer’, or ‘Gloster G.40’, was the first British turbojet-engined aircraft to fly. It was designed to test the Whittle turbojet engine in flight, leading to the development of the Gloster ‘Meteor‘. In September 1939, the Air Ministry issued a specification to Gloster for an aircraft to test one of Frank Whittle’s turbojet designs in flight. The E.28/39 name comes from the aircraft having been built to the 28th “Experimental” specification of the Air Ministry in 1939. Gloster’s engineers, working closely with Whittle, laid out a small low-wing aircraft of conventional configuration. The jet intake was in the nose, and the single tail-fin and elevators were mounted above the jet-pipe, although due to uncertainty about the spinning characteristics of a jet aircraft, at in an earlier design stage twin fins and rudders were considered. Two jet pipe/rear fuselage arrangements were also originally considered due to the potential loss of thrust through the jet pipe itself, a ‘short jet’ with a cutaway rear fuselage and short exhaust necessitating the tail plane to be carried on booms, and a ‘long jet’ with a fully enclosed jet pipe; the ‘long jet’ was subsequently selected. A contract for two prototypes was signed by the Air Ministry on February 1940, and the first prototype was completed by April 1941. Although the initial flight tests were relatively early in WW II, the German Heinkel He 178 turbojet aircraft, powered by a Heinkel HeS3 turbojet rated at 450 kp had been first test-flown on 27 August 1939, at Rostok-Marienehe on the Baltic Sea, days before the outbreak of the war (Ref.: 23).