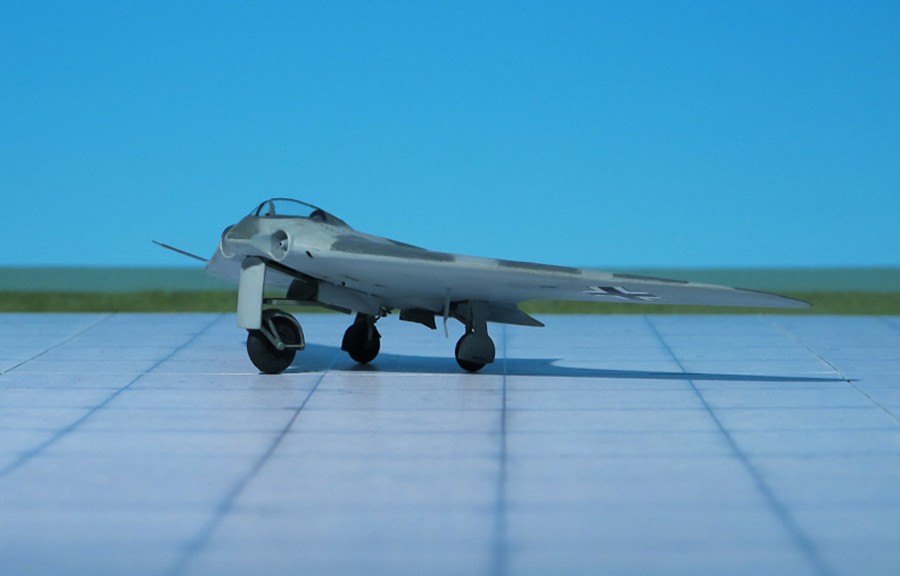 COMMENT: The Horten Ho IX V2, RLM designation Ho 229 – often called Gotha Go 229 because of the identity of the chosen manufacturer of the aircraft – was a German prototype fighter/bomber designed by the Horten brothers and built by Gothaer Waggonfabrik late in WW II. It was the first pure flying wing powered by turbojet engines. The design based on the Ho IX V1, an unpowered glider built from the onset as a prototype for a turbojet powered fighter and as a trainer for the aircraft when in production. The Horten Ho IX V2, as the first turbojet powered aircraft was designated was of mixed construction, with the center pod made from welded steel tubing and wing spars built from wood. The wings were made from two thin, carbon-impregnated plywood panels glued together with a charcoal and sawdust mixture. The wing had a single main spar, penetrated by the turbojet engine inlets, and a secondary spar used for attaching the elevens. The aircraft utilized retractable tricycle landing gear, with the nose gear on the first two prototypes sourced from a Heinkel He 177‘s tailwheel system, with the third prototype using an He 177A main gear wheel rim and tire on its custom-designed nose gear strut work and wheel fork. A drogue slowed the aircraft upon landing. The pilot in a special pressure suit sat on a primitive ejection seat. The aircraft was originally designed for the BMW 003 jet engine, but that engine was not quite ready, and the Junkers Jumo 004 engine was substituted. The aircraft was found at Friedrichroda by US Forces and later shipped to the US (Ref.: 23).