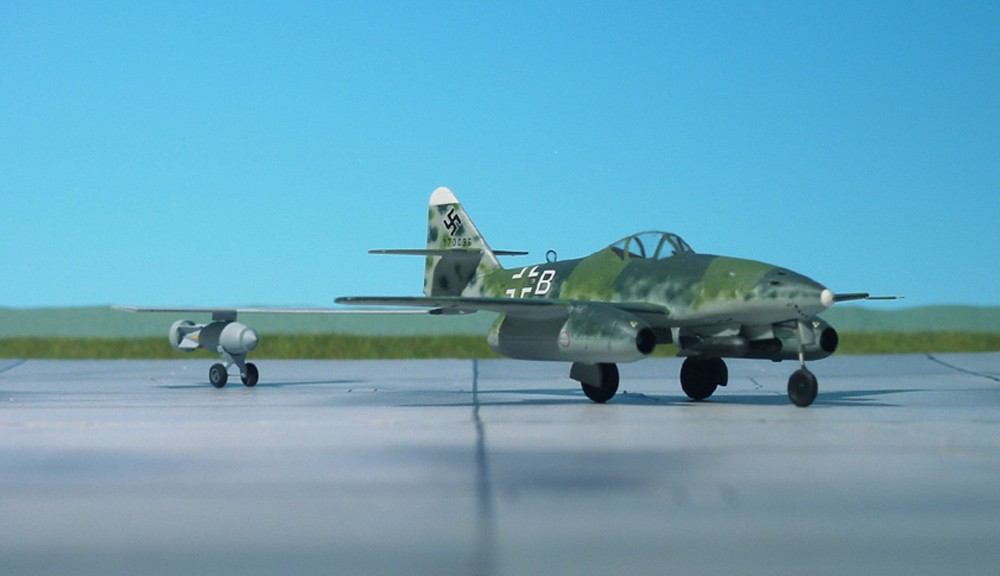 COMMENT: The fighter-bomber version of the Messerschmitt Me 262 Schwalbe (Swallow) received the appellation Stormbird (Sturmvogel) to distinguish it from those aircraft completed purely as interceptors. It was Hitler’s explicit desire to use this aircraft as a fighter-bomber incomprehensible to the manufacturer. Deliveries of that subtype, now called Messerschmitt Me 262A-2a, began in July 1944. It differed from the Me 262A-1a interceptor fighter solely in having bomb fusing equipment and a pair of pylons side-by-side beneath the fuselage nose, forward of the undercarriage wells. These could be either of the ETC 504 type or of so-called “Wikingerschiff” (“Viking ships”) type, and proposed loads included a single SB 1000 bomb, or two SC 500 bombs, and derivate types, respectively. An unconventional approach was provided by a towed bomb, SC 1000 or SC 500 fitted with a wooden wing and towed by means of a 20-ft tube rigidly attached to the bomb. The tow-bar was attached beneath the tail by means of a swivel joint permitting horizontal and vertical motion, and the wires to detonate the explosive bolts, by which the bomb and its wing were separately jettisoned, passed through the tube. For take-off a two-wheel dolly was fitted to the bomb, this being jettisoned by means of an explosive bolt once aircraft and bomb were airborne. Additionally two Rheinmetall Borsig R 109-502 solid-fuel rockets were attached to the aircraft for assisted take-off. In early 1945 trials were done with the Me 262 V10. With the bomb on tow the speed of the Me 262 was reduced to some 320-330 mph. Furthermore, due to the high lift coefficient of the auxiliary wing the bomb began to porpoise, the motion was transmitted to the aircraft causing uncontrollable flight and the pilot was forced to bail out. Eventually it was concluded that the towed bomb concept was too hazardous and further tests were cancelled (Ref.: 7).