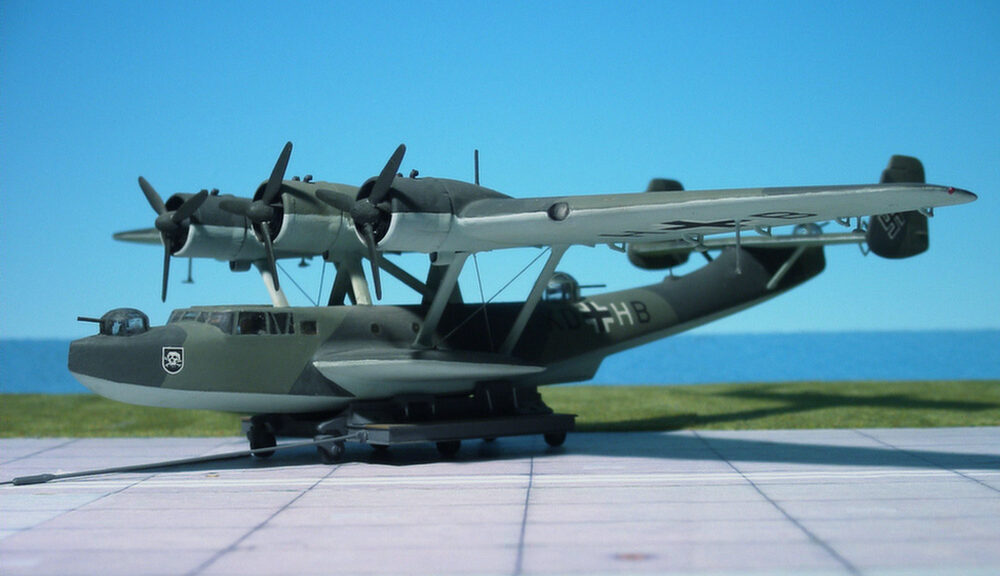 COMMENT: The Dornier Do 24 is a 1930s German three-engine flying boat designed by the Dornier Flugzeugwerke for
maritime patrol and search rescue. According to Dornier records, some 12,000 people were rescued by Do 24s during its flying career. A total of 279 were built among several factories from 1937 to 1945.
The Dornier Do 24 was designed to meet a Royal Netherlands Navy requirement for a replacement of the Dornier Wals (Do 16) being used in the Dutch East Indies, with the Netherlands government signing a contract for six Dornier Do 24s on August 1936. Two more prototypes were built for the German navy to be evaluated against the Blohm & Voss Bv 138.
The Do 24 was an all-metal parasol monoplane with a broad-beamed hull and stabilising sponsons. Twin tails were mounted on the upswept rear of the hull, while three wing-mounted tractor configuration engines powered the aircraft. Fuel was carried in tanks in the sponsons and the wing centre section. Up to 1,200 kg of bombs could be carried under the aircraft’s wings, while defensive armament consisted of three gun turrets, one each in nose, dorsal and tail positions. In early aircraft the turrets were each fitted with a machine gun but later aircraft carried a 20 mm cannon in the dorsal turret.
The Do 24 V3, the first of the Dutch boats, took off from Lanke Constance on July 1937, with the second Dutch boat, Do 24 V4 following soon after.
The Netherlands was enthusiastic about the new flying boat and planned to purchase as many as 90. Of these, 30 were to be built by Dornier (with all but the first two prototypes assembled by Dornier’s Swiss subsidiary based at Altenheim. The remaining aircraft were to be built under licence in the Netherlands by Aviolanda at Papendrecht. Of these aircraft, all but one of the German and Swiss built aircraft and the first seven Aviolanda-built aircraft were to be Do 24K-1s, powered by the original Wright R-1820-F52 cyclone 9 engines, while the remaining aircraft were to be Do 24K-2s, with more powerful  1,100 hp Wright R-1820-G102 engines and more fuel.
Only 25 aircraft had been built on the Aviolanda assembly line before the German occupation. The Luftwaffe were interested in the completed and partially completed aircraft. The Dutch production line continued to produce aircraft under German control. 11 airframes were completed with Dutch-bought Wright Cyclone engines but later models used the BMW Bramo 323R-2. A further 159 Do 24s were built in the Netherlands during the occupation, most under the designation Do 24T-1.
Another production line for the Do 24 was established in the old CAMS factory at Sartrouville, France, during the German occupation. This line was operated by SNCAN and was able to produce another 48 Do 24s. After the liberation, this facility produced a further 40 Do 24s, which served with the French Navy until 1952.
Thirty-seven Dutch- and German-built Do 24s had been sent to the East Indies by the time of the German occupation of the Netherlands in June 1940. Until the outbreak of war, these aircraft would have flown the tri-color roundel. Later, to avoid confusion with British or French roundels, Dutch aircraft flew a black-bordered orange triangle insignia.
After the Japanese invasion of the Netherlands East Indies, six surviving Do 24s were transferred to the Royal Australian Air Force in February 1942. They served in the RAAF through most of 1944 as transports in New Guinea.
In 1944, 12 Dutch-built Do 24s were delivered to Spain with the understanding that they would assist downed airmen of both sides. After the war, a few French-built Do 24s also found their way to Spain. Spanish Do 24s were operational at least until 1967, and possibly later. In 1971, one of the last flying Spanish Do 24s was returned to the Dornier facility on Lake Constance for permanent display (Ref.:24).